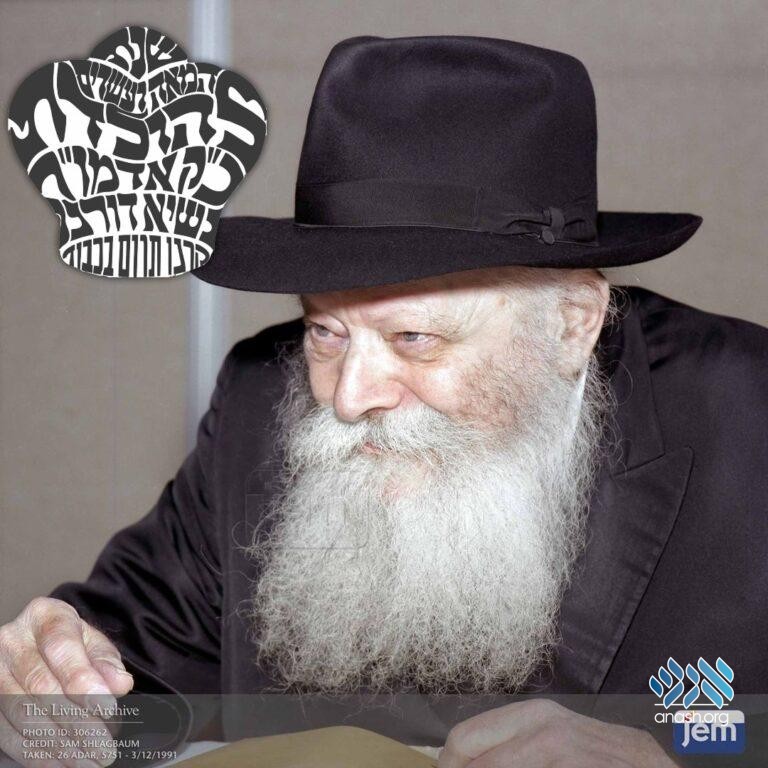 Yud Alef Nissan by the Rebbe

Beginning from the year 5731, the Rebbe held a Farbrengen each year on Yud Aleph Nissan in honor of his birthday. Interestingly, from after the episode of the Seforim began, the Rebbe ceased this custom.

The Rebbe began the second Sicha:

“It is well known that one of the worst Middos according to the Torah (and especially Mussar) is Ga’ava – haughtiness, With that being said, how is it possible that all gather here and participate in a Farbrengen which is being held in honor of one single person?

“But the truth is that this is not at all the case. Just as on Simchas Torah, we are told, the Torah wishes to dance, and the Yid has the Z’chus of serving as the Torah’s hands and feet, the same is true in our instance. The (Frierdiker) Rebbe is on high and he needs someone to be his “hands and feet”, so to speak, carrying out his work in Hafotzas Hama’ayonos, and so there is someone who fills this position.

“A story: When we were in Cheder, they would tell a story of a Rav who was very small in body, but had a very prestigious position. When asked, how is it befitting that a man so small serves a position of such magnitude, he answered: “True I may be small, but the chair is very big!” (“Der beinkel is a greiser!”)

“Meaning, the work and Torah of the (Frierdiker) Rebbe is great and it must be carried on, the one who is actually filling the position is not of all that much significance.”

The first time that the Rebbe held a Farbrengen in honor of Yud Aleph Nissan was in 5722, his 60th birthday.

Ten years earlier, in 5712, the Rebbe recited a Ma’amor in his room on Yud Aleph Nissan. Only approximately twenty-five people whom the Rebbe clearly specified on paper were invited to be present.

The Rebbe said a short Sicha and a Ma’amor beginning with one of the Pesukim of his new Kapitel (“Hashem sifosai tiftach”). While reciting the Ma’amor, the Rebbe cried copiously.

This continued until the year 5745. After that, the Rebbe no longer conducted Farbrengens on Yud Aleph Nissan anymore. From the next year and onwards, the Rebbe wouldn’t Farbreng.

The Rebbe would typically say a shortSicha in a response to the blessing he received from the Chassidim after Maariv.

Every year, the Rebbe would explain the Pesukim from his Kapitel during the Farbrengens on and around the date of Yud Aleph Nissan, during Sichos and Ma‘amorim. The first time was on Yud Aleph Nissan 5712, when the Rebbe actually recited a Ma’amor beginning with a Possuk from the Kapitel Nun-Aleph.

In 5732, the Rebbe began a custom of explaining one Possuk from the Kapitel during each Farbrengen from Yud Aleph Nissan until Shavous. Then, for a short while the Rebbe ceased this custom, only to start it again in Elul that year.

Every year, as Yud Aleph Nissan approached, there was a buzz; “Is there a new Niggun yet?” the Chassidim wondered. Who composed it? How does it go? On the night of Yud Aleph Nissan at the Farbrengen, everyone would sing the new Niggun, and Chassidim in other places would learn it as well. This became the Niggun of the year.

There is a well-known saying from the Baal Shem Tov that in the morning after Davening, one should recite his Kapitel in Tehillim. The early Chassidim took upon themselves to say the Rebbe’s Kapitel in addition to their own, as a way of strengthening their Hiskashrus to the Rebbe.

In our generation, a major push was added – every single year, several talented individuals would compose a song with a few Pesukim from the Rebbe’s new Kapitel.

Many wonder when and how this custom was born. In fact, there were three stages:

2. After some years, it was decided to choose a few Pesukim from that year’s Kapitel and fit them to an old Niggun that previously had no words. This began from Kapitel 69 (“Ki elokim yoshia tziyon”) and lasted through Kapitel 80 (“Roeh Yisroel”).

3. In honor of Yud Aleph Nissan 5742, the Rebbe’s 80th birthday, Reb Feitel Levin composed a new Niggun to the words “Harninu Leilokim”. The Niggun was accepted and from then on the whole event of Yud Aleph Niggunim took on a major turn. Every year a few Baalei Minagnim would compose Niggunim, and the one that would be accepted by the Chassidim would become the Niggun of the year.

The enthusiasm of the Chassidim during the Rebbe’s 70th birthday in 5732 spilled over into the Niggunim and that Yud Aleph Nissan four Niggunim were made. All four were sung by the Rebbe’s Farbrengen, the favorite being “B’cha Hashem chasisi.” (This can be seen on the video of the Farbrengen.

In the beginning of the third period [in which a new Niggun would be composed in honor of the upcoming Yud Aleph Nissan] there was no clear method for choosing the Niggun of that year, and the lack of clarity generated conflict among the composers. Obviously, the Bochrim had a large part in deciding which Niggunim would be sung at the Rebbe’s Farbrengen. This was crucial to the composers, for the Niggun sung by the Rebbe’s Farbrengen became the “Niggun of the year”, so each composer would attempt to rally the Bochrim behind his Niggun.

Eventually, a Va’ad (committee) was established, comprised of a few individuals who were musically inclined. They decided which Niggun would be the official Niggun of that year.

The Niggun that was chosen and sung in the presence of the Rebbe became the first Niggun sung every Farbrengen for the entire year.

On occasion, even after the Niggun was officially chosen, it was changed later on.

One example of this phenomenon occurred in 5749. A few Niggunim were composed and the Va’ad chose one of them as that year’s Niggun. However, there was a significant segment of Chassidim that disagreed with the Va‘ad choice and they sang one of the other compositions. This caused some confusion during the singing. To clear the air, on Shabbos Hagadol, Erev Yud Aleph Nissan (which was on a Sunday), before the Farbrengen, it was announced in 770 that all present should please sing the Niggun that the Va‘ad had chosen.

After the Rebbe came downstairs and made Kiddush, Reb Moshe Taleshevsky led the crowd by singing the Niggun the Va’ad had chosen. (The Niggun starts with the Possuk: “Tavoi lefanecha”). To the surprise of all, the Rebbe started the first Sicha by explaining the Possuk of “Shir mizmor”. The only Niggun that included this Possuk was the Niggun that Reb Sholom Brochshtat had composed.

Obviously, that changed everything and the Niggun right after that first Sicha was “Shir Mizmor”, It then became the Niggun of that year.

But in general, the Rebbe did not get involved in choosing the Niggun. On the other hand — it was the Rebbe who had the “last word”. As mentioned above, if the Niggun was sung by the Farbrengen and the Rebbe encouraged it, then this was essentially a final decision. There were some times when a Niggun was started and the Rebbe would not encourage the singing. In 5749 for example, when the Matzos were being sent to Eretz Yisroel the Bochrim tried a Niggun but the Rebbe showed no reaction.

To end on an interesting note: Many of the Yud Aleph Nissan Niggunim were recorded on the tapes of Nichoach. When they gave the Rebbe the list of Niggunim that were planned for Vol. 8 the Rebbe added “Velokim Maki Mikedem” – the Niggun of that year 5735.

Of all the many Niggunim composed yearly in honor of Yud Aleph Nissan, some linger in the hearts and minds of Chassidim until today, having left an impression as “out of the ordinary.

Among them we may count the Niggun of “Shuva”, composed in honor of Yud Aleph Nissan 5751, constantly sung in the Rebbe’s presence until Chof Zayin Adar, 5752. Any Chossid from that period will confirm that this Niggun was uniquely cherished by the Rebbe (and consequently, by the Bochurim and Anash), which was eminently conveyed by the Rebbe in the way he vigorously encouraged this particular Niggun.

Another treasured Niggun dear to all Chassidim is “Yifrach b’yomov tzaddik” from the year 5733. Originally an old Vizhenitzer tune, the words are from Tehillim, Kapitel 72 and they were put to the tune by Rabbi S. Cunin of California in honor of the Rebbe’s seventy-first birthday. The Pesukim talk of the Tzaddik sprouting out and gaining rule over the world and crushing his enemies, and as the commentators explain, they speak of Moshiach himself.

With the appropriate words and a beautiful lively tune, the new Niggun instantly captured the souls of the Chassidim. But it would take time until the Niggun would be officially approved by the Rebbe.

At the Farbrengen on Yud Aleph Nissan the Niggun was presented, but the Rebbe made no remark at all. As the custom was in those years, Reb Yoel Kahan began this Niggun each week at the Rebbe’s Shabbos Farbrengens after the Rebbe made Kiddush, but still the Rebbe seemed to ignore the new Niggun. At last, one week, Reb Yoel assumed that the Rebbe does not appreciate the singing of the new Niggun and he resolved that he would discontinue doing so, replacing it with a different Niggun. Surprisingly, in the middle of the Farbrengen the Rebbe asked, “Why has the usual Niggun been omitted? Let it be sung now…” From that point onward, the Rebbe encouraged the singing of “Yifrach” energetically and with great satisfaction.

The following year, the Chassidim found it difficult to part with this precious Niggun, so instead of composing a new one, the words from the Possuk “Kolah she’eiri” were added to the wordless stanza in honor of Yud Aleph Nissan, 5734.

Another interesting episode regarding Yud Aleph Nissan, 5734: Reb Bentzion Shenker, the famous Modzhitzer Chossid, who is widely acclaimed for his strong musical inclination was a resident of Crown Heights. He utilized his musical talent to compose a Niggun for the Rebbe, citing the words of the Possuk “Va’ani kirvas Elokim”. He discussed the matter with his acquaintance, Reb Yossel Weinberg, who in turn asked the Rebbe for permission to teach the Niggun to the assembled at a Farbrengen.

Indeed, during the Farbrengen on Shavuos, 5734, Reb Bentzion stood up and taught the Niggun to the Chassidim.

While the Rebbe distributed Kos shel Brocha on Motzoei Shavuos, the crowd sang the new Niggun while the Rebbe encouraged the singing.

[To hear a recording of this Niggun, listen as it was sung at the Rebbe’s Farbrengen of 15 Sivan, 5734, following the first Sicha.]

VIDEO: The Rebbe tells us what he wants for his birthday present