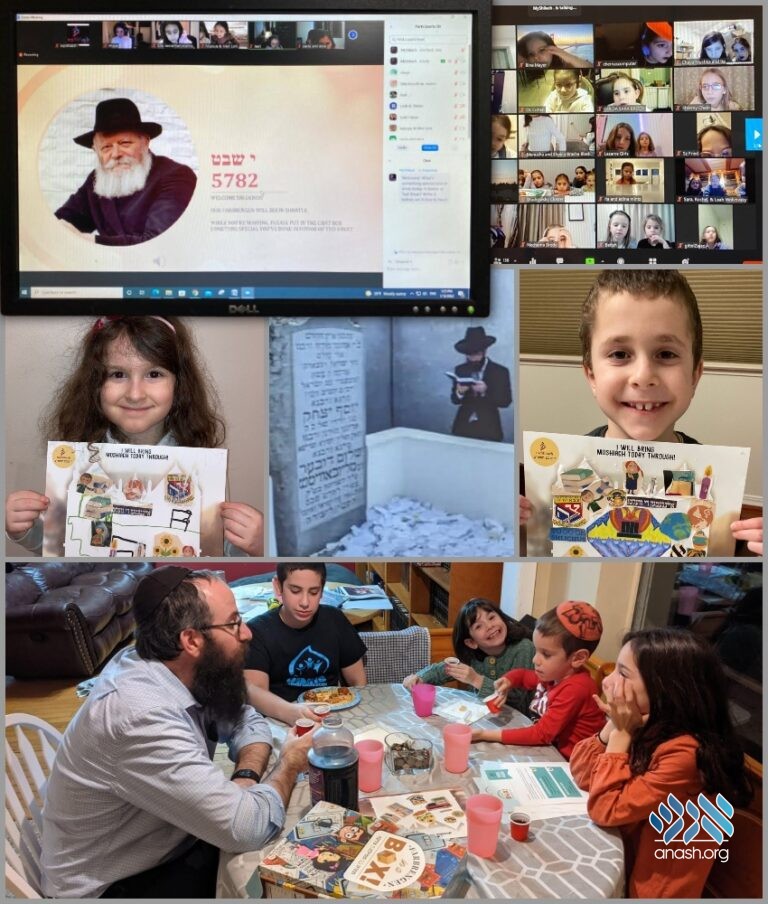 This Yud Shvat, young shluchim from around the world were treated to immersive programs both before Yud Shvat and on the day, so that they too could be surrounded by the atmosphere of the Yom Hanesius.

For kids growing up in Lubavitcher communities, the white shirt day is built into their school calendar. Yomei D’pagrah are days of exciting assemblies and special school lunches. For young shluchim living far away from their Lubavitch-schooled peers, the reality is very different. Well, it used to be, but MyShliach, a department of Merkos 302 set up for just this mission, is changing that.

This Yud Shvat young shluchim from around the world were treated to immersive programs both before Yud Shvat and on the day. So that they too could be surrounded by the atmosphere of the Yom Hanesius.

“I liked being part of a farbrengen with my friends who are shluchim and listening to the storyteller tell us how our Rebbe became the Rebbe,” says Ami Creeger, 10, who is on shlichus at the University of Cincinnati, Ohio. Ami and his brothers attend a non-Chabad local school, leaving it up to their parents to provide the Chassidishkeit and chayus in after-school hours. This year, they got a helping hand from MyShliach who opened up their weekly Sunday morning Chassidus Club to all young shluchim. 300 kids tuned in to prepare for Yud Shvat with a two-hour program that featured master storyteller Rabbi Sholem Perl.

In the following days, 350 families received a farbrengen-in-a-box that included story sheets, games, projects, and even special straw cups for grape juice l’chaims so that families had all they needed to hold a farbrengen over Yud Shvat. “There was something to help every kid get involved,” said Rabbi Mendel Raices of Chabad of the Mountains, PA, after using the fabrengen-in-a-box to lead his children in a farbrengen. “Our whole table was uplifted and we can’t thank you enough.”

This was followed by four different virtual farbrengen tracks on Wednesday afternoon. With options for boys and girls that fit east coast and west coast timezones, the farbrengens were joined by 700 unique logins. A lineup of shluchim and shluchos shared stories and hora’os with the young shluchim. They sang nigunim together and watched a video of a Yud Shvat farbrengen with the Rebbe. The video may have been a recording from years ago, but as the Rebbe’s children from around the world joined in with singing and clapping from their living rooms, generations and geography fused to create one timeless farbrengen.

“Our young shluchim are our future,” says Rabbi Moshe Kotlarsky, Vice Chairman of Merkos L’inyonei Chinuch, “It is our responsibility to give them and their parents all the tools to make sure they too can keep up their hiskashrus and the chassidishe injection that a farbrengen brings into their lives.”

In addition to the programming for Yomei D’Pagrah, MyShliach provides ongoing programs to support young shluchim including their weekly Chassidus Club that offers two hours of chassidishe chinuch every Sunday morning. Ami was so enthused by the Yud Shvat programming he has asked his parents to enroll him in Chassidus Club. “It’s fun and enjoyable to learn and spend time with my friends,” he says.