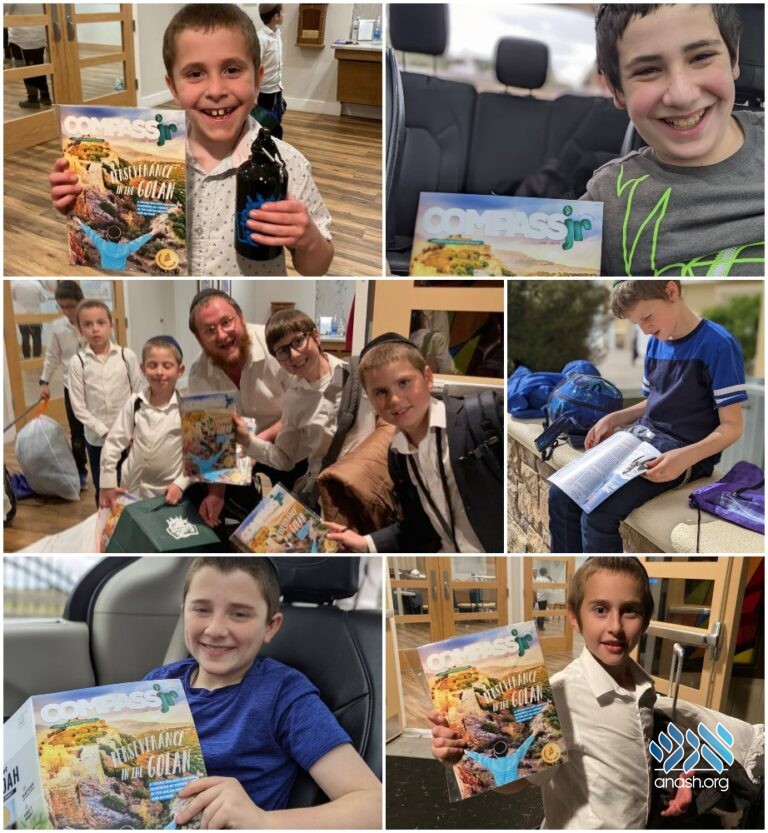 This week, yaldei hashluchim around the globe will catch their first glimpse of a magazine entirely for them, with MyShliach’s debut of Compass Junior, an exciting supplement to the Chabad House Compass Magazine.

This week, yaldei hashluchim around the globe will catch their first glimpse of a magazine entirely for them, with MyShliach’s debut of Compass Junior, an exciting supplement to the Chabad House Compass Magazine published quarterly for their parents by Merkos 302.

In signature Compass style, Compass Jr. serves as a platform through which yaldei hashluchim can gain shlichus-related inspiration and tools as well as connect with each other in a refreshing and enjoyable literary experience.

“We’re thrilled to launch this project,” says Rabbi Mendy Shanowitz, director of MyShliach. “Our team has invested hours of creative energy. We’re certain it will benefit yaldei hashluchim all over the world.”

Professionally designed and attractively illustrated, the cover story in this 36-page, full-color premiere issue shares the inspiring tale of 11-year-old Yehuda Hertzel, shliach in the Golan Heights, who chose to see his recent illness as a new platform through which to carry out his shlichus.

Geared toward children ages 8-13, Compass Jr. offers articles for young shluchim and shluchos spanning a range of reading abilities and interests. “Every detail of this magazine was designed with the young shliach and shlucha in mind,” says Rabbi Avremel Silberberg, managing editor of Compass Jr. “Through a well-balanced variety of article topics and styles, the goal is to boost the children’s pride in who they are and who they represent, and to provide them with practical tools with which to navigate challenges they may experience.”

He spotlights a column titled, “Ask the Mashpia.” An 11-year-old boy writes about his relationship with a local child and his concern that the boy is “starting to have a negative influence on me.” What should he do? His query is addressed, directly and sensitively, by Rabbi Zalman Kaplan, shliach and rosh yeshiva in Chaifa, Eretz Yisroel.

“I’m excited about the fact that the yaldei hashluchim themselves are being featured,” shares editor-in-chief Mrs. Elky Raitport, “They’re sharing their stories, posing the questions they’ve been wondering about, sending in their games, recipes, and contest entries, and seeing all of that published in a full-blown magazine. There’s even a yaldei hashluchim review board, who review each of the articles before print and share feedback that is taken seriously. In our feedback from this inaugural issue, we’ve already seen how the magazine has made the children feel connected with so many other children like them.”

The “Chavrusa Spotlight” column interviews long-time chavrusas from MyShliach’s “Ach Sheli” program—in this case Moshe Lifshitz, 13, shliach in Boise, Idaho, and Shmuli Kaplan, 22, shliach in Ontario. The two share their reflections on their five-year learning partnership and the special friendship that has emerged as a result.

“This issue’s “Halacha Corner” features a child asking how to explain to his Shabbos guest why some very simple activities are not allowed to be done on Shabbos, while other, more labor-intensive activities are fine,” says Rabbi Shaya Itkin of MyShliach. “It’s a question children are often asked on shlichus. We finally get to feature the answer in a clear, age-appropriate way, and in a place they can return to and read again and again.”

Compass Junior features a fair share of games and activities—even a comic strip—all of them uniquely shlichus-related. The “In Your Pantry” recipe corner offers recipes with ingredients “you can find in your local supermarket,” such as this issue’s “Farbrengen Cookie Bars,” submitted by a 10-year-old shliach from Utah.

Compass Junior’s first issue was released at last week’s “Shabbos Tzuzamen,” where 1,200 yaldei hashluchim attended a special Shabbaton in 97 locations around the globe, facilitated by MyShliach.

“The Rebbe spent hours speaking directly with children because he believed in their unique strength,” says Rabbi Moshe Kotlarsky, vice-chairman of Merkos L’inyonei Chinuch. “The impact of the yaldei hashluchim cannot be underestimated. And we are here to support them with their special shlichus.”

Compass Jr. is available to all shluchim free of charge. To get your copy, visit myshliach.com/magazine.