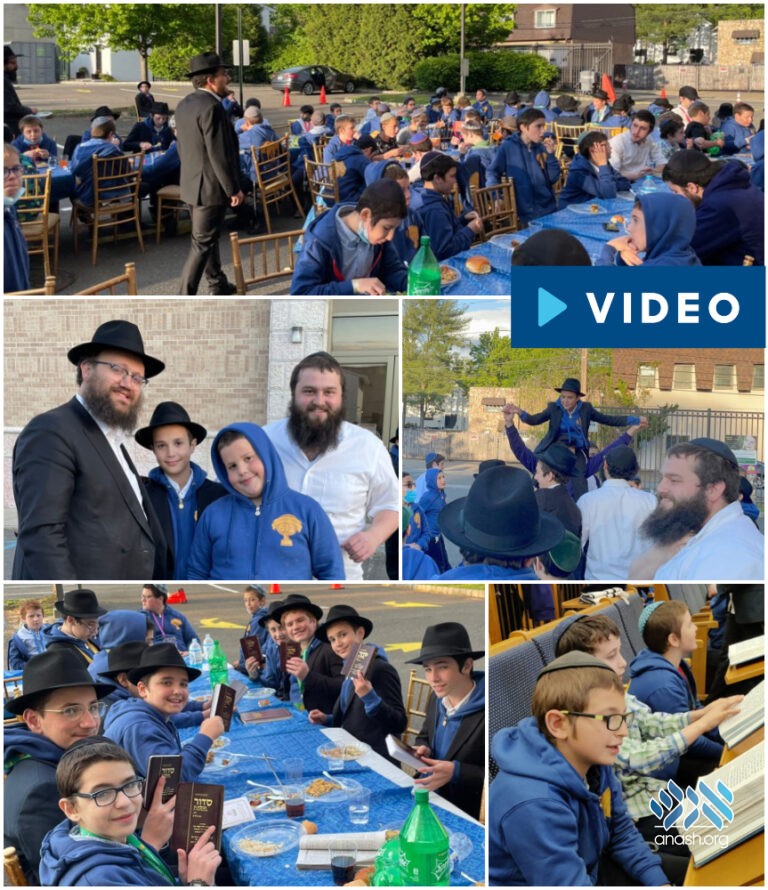 A young shliach from Champaign Illinois, Meir Tiechtel, celebrated his bar mitzvah with fellow young shluchim and students of the Lubavitcher Yeshiva, as part of their Chidon trip.

Last week, 100 young boys from across the globe celebrated their friend’s bar mitzvah at a unique event in New Jersey.

Meir Tiechtel is a young shliach who became bar mitzvah on Tuesday, the 29th of Iyar. He is also a Chidon finalist, but since his bar mitzvah was on the same day as the grand trip, he did not participate in the Chidon. He chose instead to spend the day on more serious matters such as visiting the Ohel.

Growing up in Champaign Illinois, Meir was educated in the Shluchim Online School and didn’t have any local classmates in his hometown to celebrate with.

His father, Rabbi Dovid Teichtel, told Anash.org, “We thought, what better way to celebrate his bar mitzvah than with his fellow young shluchim?”

Arrangements were made for the group of Chidon finalists to meet up with the Tiechtels in New Jersey for a beautiful celebration, hosted by Rabbi Mordechai Shain of Lubavitch on the Palisade.

Over 100 boys participated, including a group of MyShliach finalists and finalists from the Lubavitcher Yeshiva. They celebrated together, enjoying a festive dinner, hearing divrei Torah and dancing.

Since the Hayom Yom of that day spoke about the power of davening, the Tiechtels decided to gift every boy with a siddur as a memento of the occasion and to encourage them in their davening.

“It was so heartwarming to see all these kids together,” said Rabbi Tiechtel, “Especially since most of them don’t have many frum friends at home. It was heartwarming to watch my son say the ma’amar in yiddish so beautifully… The entire evening was very special.”