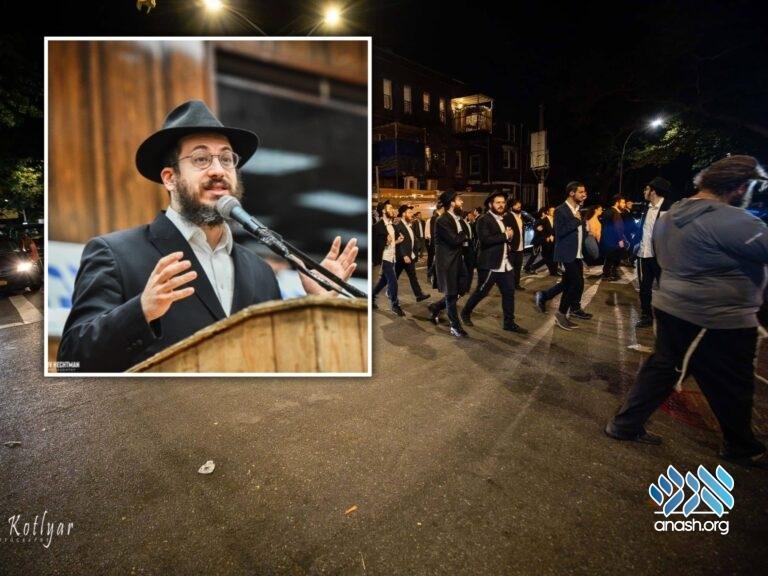 “While we were waiting, I asked them their stories. Two of them grew up in Yeshivos in Flatbush and another 2 in Yeshivos in Crown Heights. They had left the system and this is their first time back in a Shul.” Rabbi Gershon Avtzon shares his “most surreal” Tahalucha experience.

We are approaching Shavuos, the Yom Tov of the giving of the Torah. While to many Yidden, the big debate and question is in regards to the quality and quantity of the Cheesecake, to Chabad Chassidim, the question is “where are you going on Tahalucha this year”?

To a Chassid, the Tahalaucha is not just another minhag, it is an honor and privilege to represent the Rebbe and bring joy to other Yidden. The fact that the Tahalucha usually coincides with rain (remember Shavuos 5749?) and other challenges, only makes the joy that much sweeter. We all have our stories and memories of different events that happened on Tahalucha, and I would like to share with you my most surreal experience:

This past Simchas Torah, I was invited to join the group that was going to Tahalucha to Brooklyn College. I was told that it is a sight to see: A Shliach that deals with a secular college right in the middle of Frum Flatbush! While shlichus on campus is mostly synonymous with remote college towns or secular cities, here was a Shliach in the heart of Brooklyn.

[ Being completely honest and transparent: The fact that I would be able to just walk an hour and take my younger sons was an extra incentive.]

We arrived at the rented Chabad House (literally a house in Flatbush that was transformed into a Chabad House) and there was a small Farbrengen in session and then hakafos began. People kept coming in and then Rabbi Moishe Raichik – the Rebbe’s Shliach – announced that the crowd should go out to the street for the seventh and final hakafa – “The Rebbe’s Hakafa”.

There were about 15 students left and while we were waiting to begin, I asked them their story and history. The responses shocked me: Two of them grew up in Yeshivos in Flatbush and another 2 in Yeshivos in Crown Heights. They had left the system and this is their first time back in a Shul. A few others grew up traditional while some others grew up completely secular.

At that moment Rabbi Raichik raised his hand and there was silence. In the background, there were frum people hurrying with their kids to their respective local Shuls, but to me, time stopped and space ceased to exist. Rabbi Raichik told all assembled to forget their hangups of the past and embrace Hashem and his holy Torah. Then – in the middle of the street, to the shock of the local onlookers – we began to dance: These young Neshamos started screaming “Am Yisroel Chai” and you could literally see the baggage disappear and the Neshama appear. It was surreal: Souls dancing on the busy street of Frum Brooklyn. I returned to 770 and hoped that my neshama would dance with the Torah in such a real way as these college kids.

I did not connect with these students, but I did hear through the grapevine that one of them left his non-Jewish girlfriend and married a Jewish girl. One started to keep Shabbas and the others are still on their journey towards their personal Mattan Torah.

Dear Friends: I just heard that the dedicated shluchim need to leave their rented space and have embarked on a surreal campaign to buy a Chabad House in Brooklyn. It is only appropriate that a Shlichus that produces, and experiences, such surreal moments of Nachas to Hashem should be successful in their surreal campaign. Let’s all be honest: They are dealing with children from our communities that we are really responsible for. Our communities have alienated them, and Chabad of Brooklyn College is bringing them home. Let us build a home for the children of our community.