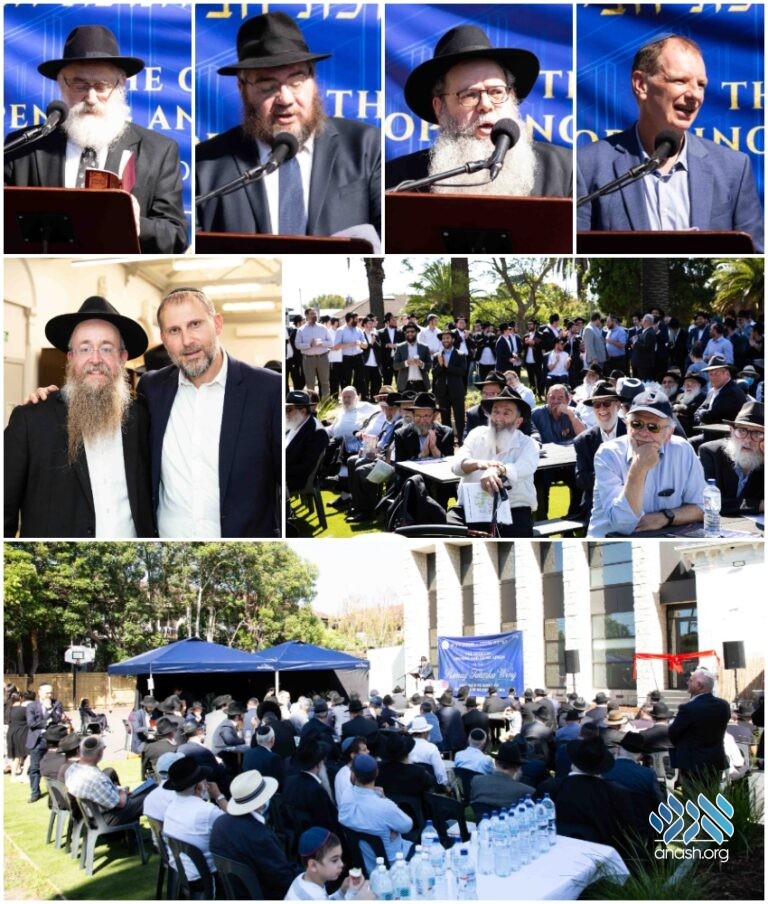 Despite the rain forecast, Sunday 10th of Adar dawned gloriously, providing the perfect backdrop to celebrate a momentous and historical milestone in the bright history of Melbourne’s Jewry. After many years of planning, a successful building campaign conducted just under two years ago, and unwavering determination to progress the construction even through Melbourne’s lockdowns, hundreds of members of the community gathered to celebrate the Chanukas Habayis of Yeshivah Gedolah’s newly constructed Ronny Tatarka Wing.

The event opened with the Rebbe’s Kapital, Tehillim for the plight of all impacted by the War in Ukraine, a letter from the Rebbe read by Mashpia Rabbi Yaakov Winner, and words of inspiration from the Rosh Yeshivah, Rabbi Binyomin Cohen, who portrayed the great merit of those who financially support the fires of the Torah so they are never extinguished, and the great resilience of the Yeshivah in continuing Seder throughout the entire lockdown period.

This was followed by greetings from Mr. David Southwick MP, Deputy Leader of the Victorian Liberal Party, and Mr. Josh Burns MP, federal member for Macnamara, both of whom shared their enthusiasm at the expansion of the Yeshivah, and congratulated the faculty and students for the new facility.

Mr. Avrohom Procel, executive director of Yeshivah Gedolah, presented awards to major donors in acknowledgment of their vital partnership and reciprocating the Yeshivah’s tremendous gratitude. In particular, Rabbi Shmuel Gurewicz was recognized for his major role in spearheading the initiative, as well as the Tatarka Family for their major sponsorship of this project. After being presented the Diamond Donor Award, Mrs Sarahle Tatarka addressed the crowd on behalf of the Tatarka family. She was preceded by Rabbi Shmuel Gurewicz with a vote of thanks to all of the donors.

The Tatarka Family formally opened the new wing by cutting the ribbon and affixing the main Mezuzah. This was accentuated by a rousing cantorial rendition of Shehecheyanu by the YG Mashgiach, Rabbi Sholom Ber Engel, with thanks to Hashem for bringing the project to fruition. Rabbi Dovid Gutnick, senior minister of East Melbourne Synagogue and representative of the Yeshivah’s alumni, regaled the rapt audience with a series of heartwarming reflections of his time as a student at Yeshivah Gedolah, and the indelible impressions formed by his personal interactions with its staff members.

The fast-paced yet moving event was masterfully presided over by master-of-ceremonies, Josh Wonder. After bringing the proceedings to a close, the audience was invited to alternate between the sumptuous smorgasbord, the impressive musical background accompaniment by virtuoso Yeshivah Talmid, Nissi Leinkram, and a tour of the newly opened Ronny Tatarka Wing. The beautiful dedication ceremony generated an outpouring of positive feedback and was a tremendous Kiddush Hashem.

The new wing contains an extension to the Study Hall (Zal), new staff offices, a new Shiur room, and five new bedrooms with modern amenities to accommodate fifteen more students. The expansion represents a significant upgrade to a property that the Rebbe regarded as his personal possession, as evidenced in its inclusion in the Rebbe’s personal Mechiras Chometz before each Pesach.

The wing is named for Ronny Tatarka OBM, philanthropist and successful businessman who tragically passed away in his prime. Ronny Tatarka was a passionate supporter of numerous Jewish causes, and he deeply cared for the success of Yeshivah Gedolah, the welfare of its staff and students, eventually culminating in a role on the executive board of Yeshivah Gedolah.

Yeshivah Gedolah looks forward to capitalizing on its new facilities to further expand its student body of both Australian and international Bochurim. With the Covid-19 lockdown period in the past, and the Australian border wide open to international students, applications to Yeshivah Gedolah are already filling up, with strong interest from all quarters.