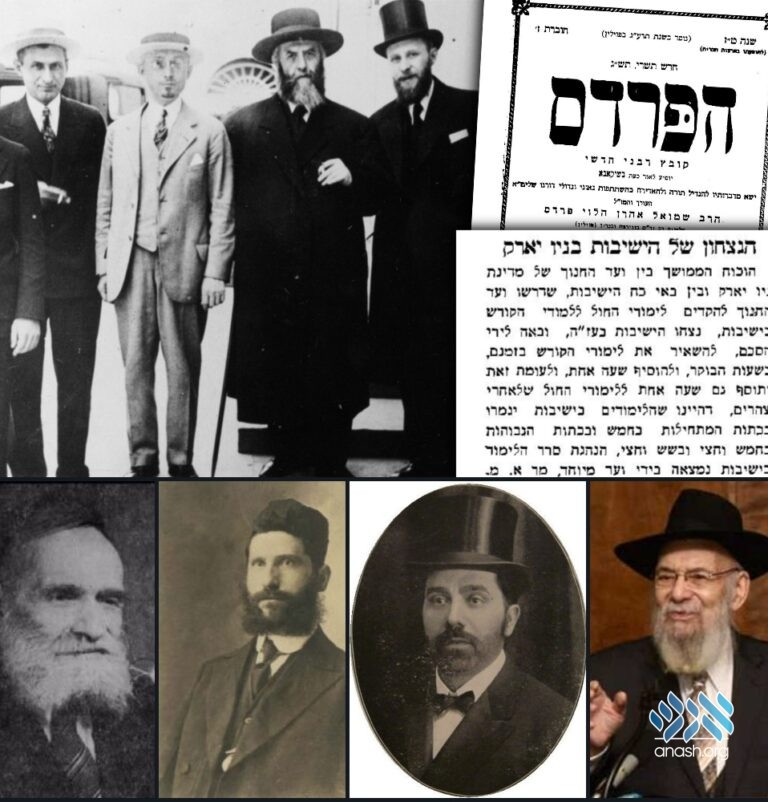 The present day is not the first time that the New York Board of Education threatened the yeshiva system. A similar attack took place exactly 80 years ago and was canceled through the fortitude of the Frierdiker Rebbe and his chassidim.

In the summer of 5702 (1942), after three years of discussions, the New York Board of Education was preparing to implement a regulation that would mandate schools to start the day with secular education.

The Frierdiker Rebbe, however, was adamant against this new regulation which would impair the learning and prominence of Torah. Borrowing the possuk “Reishis arisoseichem,” the Frierdiker Rebbe explained that the first thing one should do when getting out of bed is to designate the time to Hashem. In a yeshiva, that means that the day begins with Limmudei Kodesh, and in general, that a person should not work before they daven Shachris.

In a letter addressed to Rabbi Yisroel Rosenberg of Agudas Horabbonim (Igros Kodesh vol. 6, p. 376), the Frierdiker Rebbe calls for a battle to be waged against the decree and insists that Yeshivos not be represented by Jewish activists who would attempt to compromise with the authorities. There can be no compromise on this point! The Rebbe asks Rabbi Rosenberg to visit him so they can discuss how to combat this resolution.

Not long after, the Frierdiker Rebbe wrote to Rabbi Leizer Silver, where he bemoans the point that those Jewish activists did not allow Rabbi Rosenberg to speak and present his firm opposition to this guideline.

[While we don’t know for certain who these activists were, we do find a letter to a Judge Rosenman (pp. 12-13), who was the President of the Jewish Education Committee.

While thanking him for his proclamation about the importance of a Jewish Education, the Frierdiker Rebbe demands that he get involved in ensuring that all Talmud Torah’s teach about Torah and Mitzvos and that all the instructors be observant. The Judge, however, replied that the Committee doesn’t get involved in what the Talmud Torah does.

If it was this committee that was dealing with the state, it is understandable why the Rebbe was unhappy and wanted others to replace them.]

Yet, the Frierdiker Rebbe did not suffice with this, and he waged this battle on many fronts. The Rebbe wanted other yeshivos to protest this decree and he called out specific yeshivos to get involved.

The Frierdiker Rebbe wrote to Rabbi Nissan Telushkin to get at least ten Rabbonim who would visit various shuls and thunder about the dangers of this guideline. Evidently, the Rebbe was trying to not only bring this to the attention of the people, but that they should join the opposition and the weight of public opinion would cause the Board of Education to rescind this resolution.

In the Lubavitch Hakriah V’Hakedusha publication of Menachem Av 5702, an article screams in big bold letters, “NIT” (NO!), and goes on to articulate why the resolution is not only bad for yeshivos, but it is against the spirit of the United States which gives everyone freedom to practice their religion without disturbances.

The following is a story that was heard from Rabbi Dovid Edelman a”h, who was a bochur in 770 around that time:

in the summer of 5702 (1942), after declaring that they go ahead with their decision, the New York State Board of Education, announced that any principal who would disobey the new regulation would be arrested.

During that time, representatives of Agudas Chassidei Chabad went to Albany to discuss it but to no avail. The BoE was firm in its decision, and they even showed them letters from other yeshivos that they accepted the new regulation.

The chassidim then told them this:

“In 5687 (1927), the Rebbe was imprisoned in Russia because he established schools that the Soviet government didn’t approve of. The US congress and President Hoover intervened and demanded that he be freed. Are you now going to arrest Rabbi Schneersohn and make America the laughingstock of the world?!

“The Russian government will publish the hypocrisy and irony of the matter. America demanded that we free him, and then two years after he’s in America, America imprisons him for the same crime…”

When they saw that the Frierdiker Rebbe would not back down in face of this threat, and mindful of the international backlash this action can create, they rescinded.

In Tishrei 5703, the Hapardes journal reported that the efforts were successful, and an agreement was reached that the day can begin with Limmudei Kodesh.

Today, as a result of the Frierdiker Rebbe’s determination, all Yeshivos and Day Schools can begin their day with Torah.