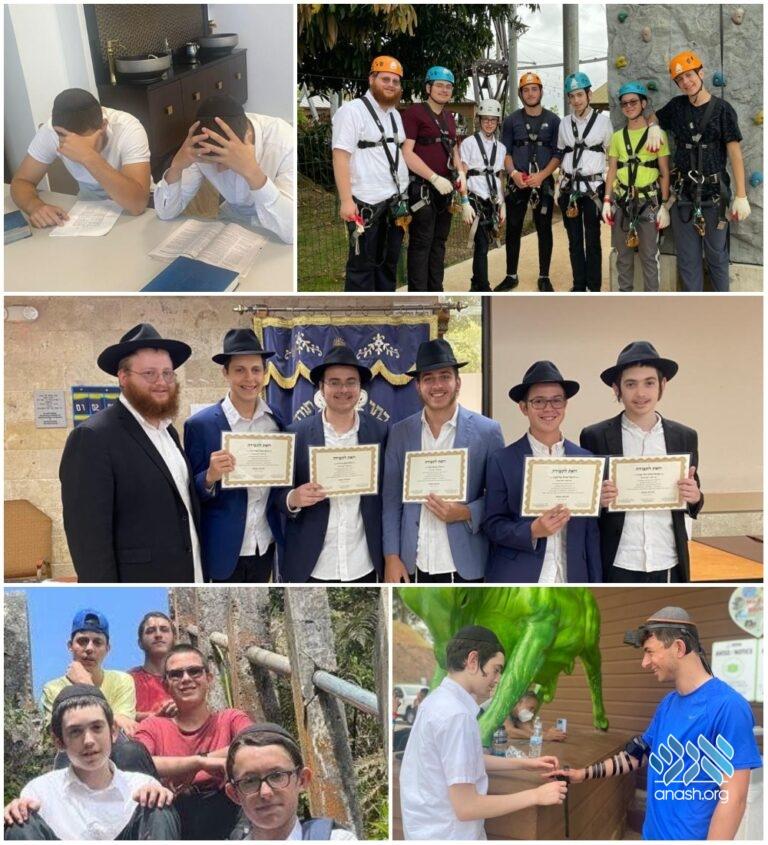 As a reward for their learning of Mesechtos Sukkah and Shabbos, six bochurim from the Klurman Mesivta in Miami participated in a grand trip touring Puerto Rico and received sets of seforim.

Six hard working bochurim from the Klurman Mesivta in Miami participated in a grand Mivtza Torah trip touring Puerto Rico and received sets of Likkutei Sichos and Toras Menachem as a reward for their learning of Mesechtos Sukkah and Shabbos.

The Mivtza, arranged by the devoted shluchim of the Yeshiva involved quotas with periodical tests going through the Mesechtos. For those in Shiur Alef, the learning was from Meseches Sukkah with the older Bochurim going through Meseches Shabbos.

The three day trip started daily at the Chabad House in San Juan where the bochurim davened, followed by a learning seder for a few hours. Following were many exciting activities that Puerto Rico is known for such as the famous El Yunque Rainforest, the night kayaking and the incredible ToroVerde mountaintop zip lining at speeds of 100 mph in a two mile stretch 4000 feet above sea level.

On the zip lining trip, some of the bochurim with the shluchim engaged in a conversation with two of the other visitors at the site who revealed that they were Jewish. Immediately upon hearing this, the bochurim did not waste the opportunity and waited for the men to finish and put on Tefillin with them. One of the men informed them that this was his first time doing it, making it a great Simcha right there on the zip lining mountaintop.

Following the trip, the bochurim of Shiur Alef received sets of Likkutei Sichos for their hard work while the older bochurim received sets of Toras Menachem ranging the years of 5742-5752 at a event for the whole Yeshiva saluting them for their efforts.

This Mivtza would not have been made possible without the devoted shluchim led by Moshe Chein, and Rephoel Wilmowsky who spent many days and nights working on this Mivtza.

This Mivtza was overseen by the tireless Hanholoh of the Yeshiva led by the Menahel, Rabbi M. Schurder and the Rosh Yeshiva, Rabbi E. Smith who made sure that every detail of the learning and trip were arranged properly.