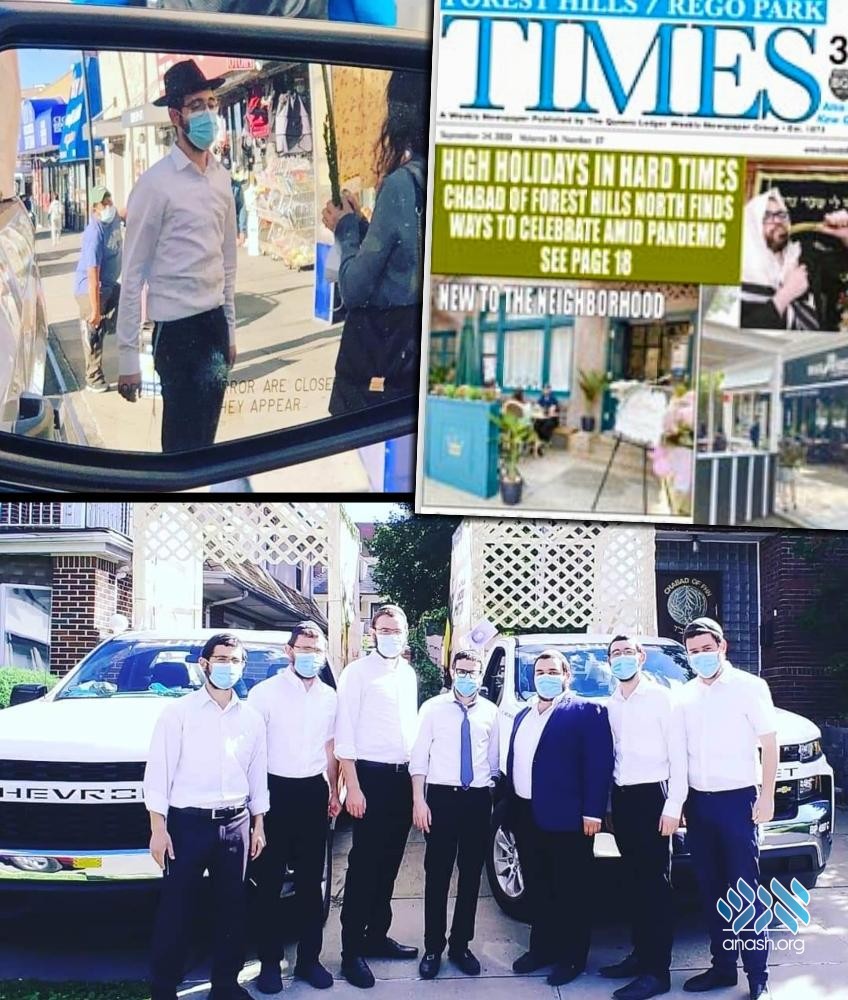 Bochurim from Yeshiva at the Ohel joined shliach Rabbi Mendy Hecht of Chabad of Forest Hills North to bring the mitzvos of Sukkos to hundreds of Queens residents with two new Sukkah Mobiles and a public sukkah open to all.

Bochurim from Yeshiva at the Ohel joined shliach Rabbi Mendy Hecht of Chabad of Forest Hills North to bring the mitzvos of Sukkos to hundreds of Queens residents with two new Sukkah Mobiles and a public sukkah open to all.

For the first time ever, Chabad of Forest Hills North had two of their very own Sukkah Mobiles this year going around town, as well as a beautiful public Sukkah for those that would like to say a bracha. The Sukkah, which was open to all, was just minutes from busy train and bus stops.

Over Sukkos, hundreds of Jews stepped into the Sukkah and got the chance to fulfilled the Mitzvah of daled minim. Many stated that it was the first time in their life that they had done this mitzvah.

The Sukkah Mobiles also circulating the streets of Forest Hill North, bringing the mitzvos of Sukkos to many hundreds of Jews who normally would not have the chance to fulfill them.

The shluchim and bochurim received much positive and heartwarming feedback, and a local newspaper was so impressed that they covered the story on their home page.

“The mivtzoim was a true Kiddush Hashem, in Forest Hills and by extension, the entire world,” Rabbi Hecht told Anash.org.

“A special thank you goes to the bochurim from the Yeshivah at the Rebbe’s Ohel for all their hard work. We wish them much success in all their future endeavors,” he said.

Chabad of North Forest Hills also hosted a beautiful Simchas Torah celebration, even with the area being a ‘red zone’. The limited crowd danced on Simchas Torah night until 12:00 AM, and during the day there was a beautiful minyan with kids Hakafot that had people staying untill the end of Yom Tov. A full hot Kiddush menu was served, as every year with lchaim and drinks all pre-plated by waitresses.

“What was unique this year is the NYPD insisted closing the streets around our Chabad all the way to Queens Blvd for Hakafot at night so we can dance safely on the street,” Rabbi Hecht said. “This was something never done before and amazingly this year in the pandemic and darkest times we were able to do so with the police themselves requesting it.”

“The next day neighbors said they heard over 100 people dancing very lively and saw police and weren’t sure what happened. I guess we were dancing so lively for all those that could not attend, that it sounded like over 100 people which was what we usually attract every year. And of course the police were just there to close the streets for us. It was truly inspiring and uplifting,” he said.

To cover the costs of this amazing project please partner with us at www.ChabadFHN.com/donate