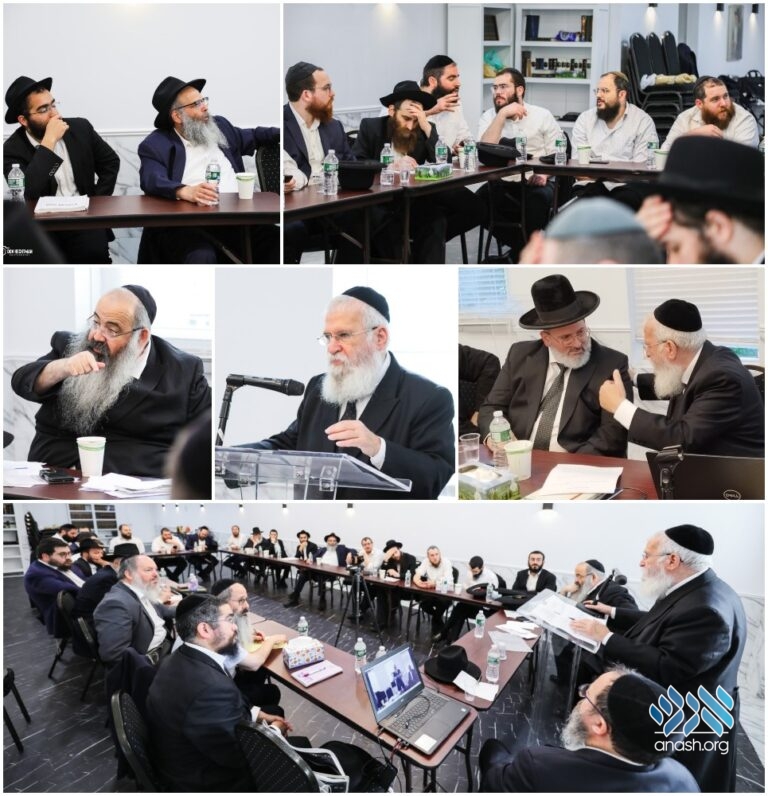 After studying for a year in the Machon Limud Halacha – Lemaan Yilmedu Chuppa-Kiddushin Course, shluchim and future rabbonim joined a full-day yom iyun where they heard from experts on the topic from around the world.

Siddur Chuppa v’Kiddushin is one of the most important subjects in the work of every shliach. It is also a complicated and sensitive subject. It includes numerous halachos on various topics such as kesuba, eidus, yuchsin, and of course conducting the chuppa and more. Enormous care is needed since errors due to ignorance can cause extremely serious problems and pitfalls.

For this reason, it was decided, at the Machon Limud Halacha – Lemaan Yilmedu, not to suffice with a quick course to study the main issues but to provide a year-long course in which shluchim and rabbanim would learn all the details of the halachos directly from the Shulchan Aruch and nos’ei keilim, along with background from the Gemara and, of course, the piskei Rishonim and Acharonim. Although it requires a big investment, those who complete the course leave with wide-ranging knowledge of the subject and are fit to conduct the chuppa and kiddushin themselves k’das Moshe v’Yisrael.

Over a year’s time, students taking the course had a weekly shiur with Rabbi Mordechai Farkash who is known as an expert in the field. He taught the topics in an organized fashion using printed material that included the Shulchan Aruch with an English translation, summaries, and visuals.

A Yom Iyun was held at the end of the course which focused on practical application, i.e. how to implement the halachos that were learned when actually conducting a chuppa and kiddushin. The Yom Iyun was led by the distinguished: Rabbi Yochanan Gurary – Chief Rabbi of Holon; Rabbi Pinchas Altheus – member of the Moetzes Ha’Rabbanut in Holon and expert in Siddur Chuppa v’Kiddushin.

The Yom Iyun was held in Lemaan Yilmedu’s new center in Crown Heights, l’ilui nishmas the director of the Machon, Rabbi Zushe Wilhelm a’h. His son, Rabbi Chaim Yisrael Wilhelm, opened the event by thanking the rabbanim, as well as the talmidim who invested themselves in this important subject.

Rabbi Yitzchok Levy, an important guest and member of the Moetzes Ha’Rabbanut Ha’Rashit l’Yisrael, gave a shiur on the topic of the kesuba.

Registration for the new cohort of the course on Siddur Chuppa v’Kiddushin is now open. The hanhala of Lemaan Yilmedu requests that those who are interested register now and not wait till the last minute.

For information and to register: https://lemaanyilmedu.com/chupa-vekidushin/