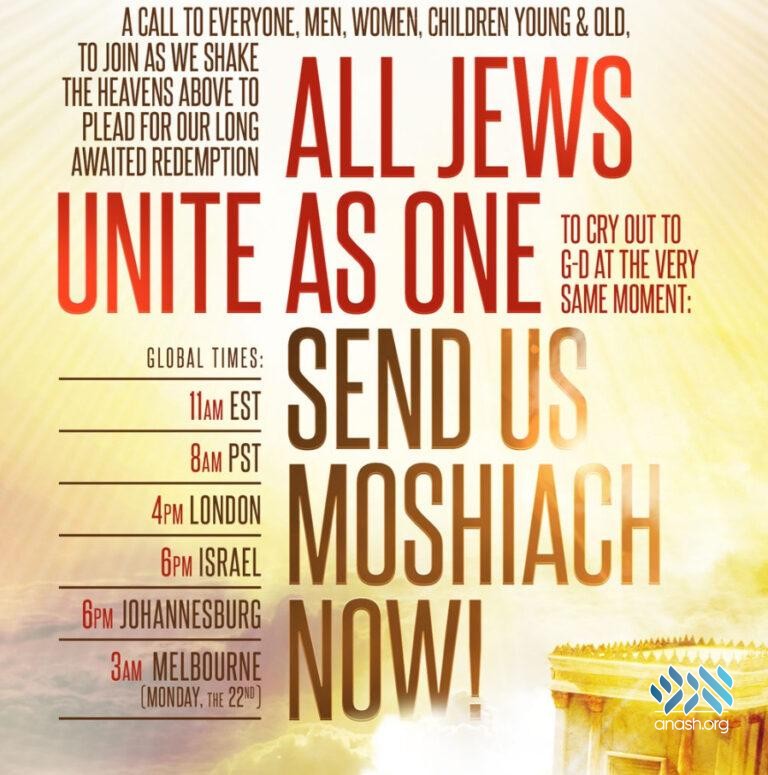 A simultaneous global prayer will be held today at 11:00 AM EST, with millions of Jews from around the world joining to beg Hashem to send Moshiach.

One of the 13 principles of faith that the Rambam established is to believe with complete faith in the coming of Moshiach. Each day in our Prayers, Jews worldwide ask for Moshiach – the Righteous one anointed by Hashem- to come.

THIS SUNDAY, 9th of Adar, Feb. 21, at the same time,  we will unite to do this in an unprecedented way!

MILLIONS of Jews in locations as varied as Australia, France, Russia, and China will all say the same prayer at the same time, creating a powerful sense of unity that will cross all borders.

Not only physical borders, but spiritual borders as well.

Non-affiliated Jews, Ashkenazim, Sephardim, Chassidim, and more will join together with the same prayer for peace and redemption!

How did this all begin?

Following in the ways of Queen Esther, from the story of Purim, she worked tirelessly with unmatched self sacrifice and dedication.

This unassuming lady was encouraged by the advice and endorsement from many renowned Rabbis and Jewish leaders.

Under the banner *All Jews as One*,  the coordinator who wishes to remain anonymous, worked tirelessly with a dedicated  committee, going  above and beyond to spread the word among every demographic, men, women and children of all ages.

Much of the work has been done, so you may wonder where YOU come into the picture.

Since Geulah is all encompassing and concerns the entire Jewish ppl, it will not suffice if only a part of the nation prays!!! It is imperative that every Jew pray with tremendous devotion to Hashem!

So PLEASE DO NOT UNDERMINE YOUR ROLE!

Every bit of kavana, T’hilim, Torah, Tzedaka can tip the scale for the entire world!

The designated prayer was translated into Hebrew, Russian, Italian, Spanish, and more, in order to allow Jews in scattered locations to pray together in their own languages.

It simply asks Hashem to send his Righteous anointed one- Mashiach- to redeem us, now and with mercy, from exile and all suffering, to reveal His name in the world and to bring an end to war, strife, sickness and pain, and bring about eternal peace, healing, and everlasting joy.

But you can simply say WE WANT MOSHIACH NOW from the depths of your soul:

The Mabit says- every single prayer ever recited-is stacked in heaven, waiting,  and YOUR T’fila-or that of your neighbor or friend-may be that last one Hashem is waiting for! That means each and every prayer is stacked upon 2,000 years of millions of prayers said throughout years of suffering, persecution, and pain…

and YOURS may be the one that can bring history to its grand climax!!

We want MILLIONS of Jews and non Jews to pray!!!

Moshiach is waiting to come, but Hashem needs to HEAR from US- ALL OF US- that we are wanting and READY to WELCOME him!!

So…. at 6 pm Israel time, 8 am Los Angeles time, 11 am New York time, please STOP whatever you are doing, say the short prayer with as much kavana as possible, and please also set aside a small amount of money to give to  charity which speeds the Redemption.

Times and prayer in Hebrew and English are on attached flyers. If you need it in other languages please text 323-495-3010.