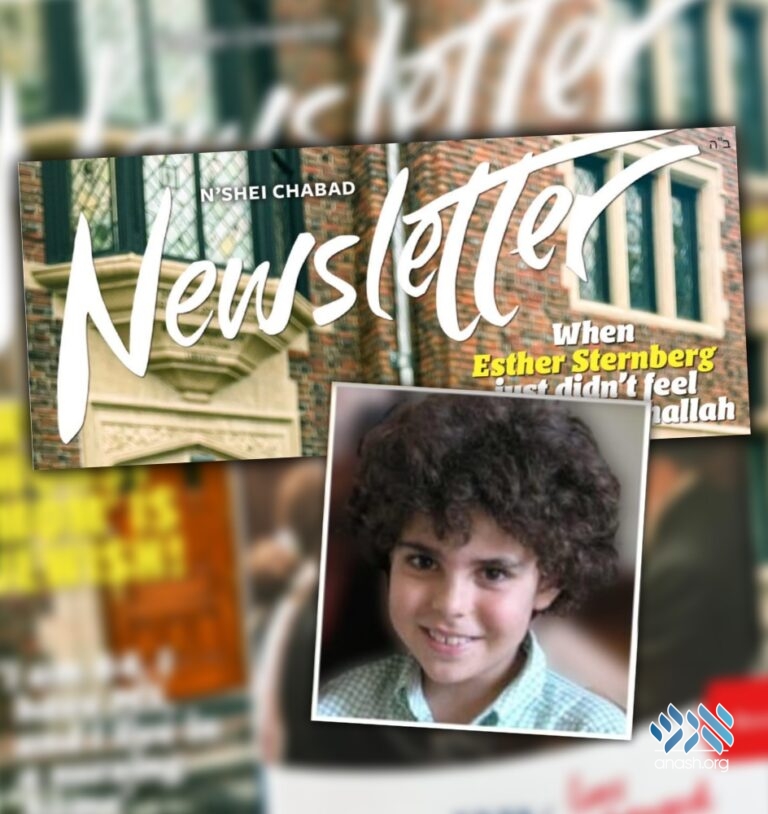 After an adventure with her son, Lenore became known as “World’s Worst Mom!” Was she right? Was she wrong? Read her story in the Tishrei issue of the N’shei Chabad Newsletter.

In 2008, Lenore Skenazy’s nine-year-old son asked his mother and father if they would drop him off someplace he’d never been before in New York City, where they lived, and let him find his own way home on the subway. He asked a few times. He really wanted the challenge! So Lenore and her husband decided it was fine. Everything worked out well, but news of the adventure didn’t sit well with our current culture which raises children in a mode that is filled with fear and worry. Lenore became known as “World’s Worst Mom!” Was she right? Was she wrong? Read her story in the Tishrei issue of the N’shei Chabad Newsletter which will be in Crown Heights stores before Rosh Hashanah, or click here to subscribe.

Temmi Hadar, a popular writer in the NCN whose column is called “Finding the Joy,” thinks about being rich or poor this way:

…Often I can drive by the shacks in Alex, South Africa, where I see 200 people or more sharing a toilet and one tap, and then past the Sandton mansions, where a house with five bathrooms or more is occupied by a family of four. In truth, what separates one from the other is merely the circumstances of birth. People live in Alex because they were born there, or born in other less affluent situations. People live in Sandton or other upscale suburbs often because they were born there, or in other similar suburbs dotting Joburg. Sure, some people rise above their circumstances and are born in Alex and live in Sandton. But global statistics indicate consistently that the best assurance of living a middle- to upper-class life is being born into a middle- to upper-class family. And the surest road to poverty is being born into it. So, as I approach Rosh Hashanah, that’s what I’m thinking about. Everything I have, all the multitude of blessings in my life, is gifted to me from G-d. Sure, I work hard and did well in school. I’m dedicated to my work. But it’s not me. It’s never been me. I could have been born to a different family. A different life. Or in a different era. Where Jews were the ones living in shacks, because of who they were. The fact that I wasn’t and that I am not is all a gift from G-d. So this Rosh Hashanah, I’m showing up at shul to give thanks…

Elchanan Geisinsky explains why investing in I-Bonds is a good idea in this high-inflation era when safe investments are hard to find.

And Charles Ramat remembers how the Rebbe spoke to him when he was very young and his mother was sick. He says:

[The Rebbe told me:] “… The fact that she is being treated by reputable doctors is a very, very good thing. But from everything you’re telling me, the prognosis is not good. So I would advise you to hope for the best, but prepare for the worst.” Because he was so honest, because he didn’t sugarcoat anything, I heard him, where I would not have been willing to hear a rebbe who told me to recite psalms day and night. At that point in my mother’s illness I just didn’t believe that it could make a difference, and somehow the Rebbe understood my mindset and knew how to speak to me, how to reach me. Now, I am not saying that the Rebbe would have given the same answer to another person in the same situation. I can only relate what he told me. But I sensed that a part of his genius was knowing how to reach each person. Because he never said that a miracle would happen, because he didn’t raise any false hopes, he captured my heart. At that moment, I thought that he was the wisest man on the planet. When the audience came to an end, he said, “Please keep me informed about your mother’s situation.” And being the 18-year-old wise guy that I was, I shot back with, “Are you just saying that, or do you really want to hear from me?” The Rebbe answered, “I would never say something I didn’t mean.”

Read all this and more in the Tishrei edition of the N’shei Chabad Newsletter, available before Rosh Hashanah in Crown Heights stores or by subscription by clicking here.