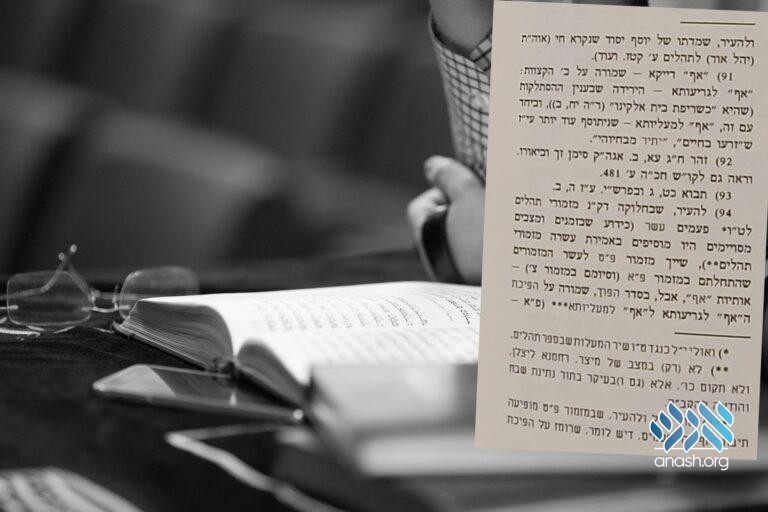 A group of women, inspired by a note in a sicha of the Rebbe, began a group to encourage saying certain Kapitalach in Tehillim, and they want others to join as well.

A group of women, inspired by a note in a sicha of the Rebbe, began a group to encourage saying certain Kapitalach in Tehillim, and they want others to join as well.

“Earlier this year, a note from the Rebbe received wide publicity,” they said. “In the note, the Rebbe writes that this year, תשפ”א, will be transformed from “אף” (wrath) to “פלאות אראנו” (“I will show you wonders”).”

The note they are referring to is from the Sicha of Hisvaaduyos 5751, vol. 2, p.94, Parshas Vayigash. However, they say that there seems to be another directive from the Rebbe on what we can do to transform the “אף” into “פלאות אראנו”.

“Our understanding of the sicha is that it can be accomplished by saying Tehillim, specifically Kapitalach 81-90, every day,” they said. “Many of us already have a lot of Tehillim to say this year, especially with the Rebbe’s Kapital. To make it more easier, we can divide into groups of 10 that will each say one of the 10 kapitals so that many of us are together saying the 10 kapitals.”

The group of women opened a WhatsApp group to facilitate the saying of Tehillim Kapiltalach 81-90.

“Anyone interested in being part of divided Tehillim can join here, take the next kapital. Once we get to צ restart from פא. Commitment to say until תשפ”ב bli neder or find someone else to do it.”

Translation of the footnote in the Sicha below:

Footnote 94: To point out that in the division of Tehillim of 150 kapitals into 15 x 10, (as is known that in certain times and situations people would say an additional 10 kapitals of Tehillim**), Kapital פ”ט is connected to the 10 kapitals that start with kapital פ”א (and conclude with kapital צ)- the letters “af”, but, when the order is reversed, which shows on transforming the negative “af” to the positive “אף” (pei aleph- Roshei Teivos פלאות אראנו (I will show you wonders)****, that the main emphasis is on the revelation to eyes of flesh — “אראנו” — on good that is apparent and revealed.

***Additionally, perhaps there is to say [this is the Rebbe’s chidush], that in kapital פ”ט the word “”אף” appears 5 times. There is to say that this hints to the transforming of the “אף” of Galus Paroh (the root of all exiles), into “חמישית לפרעה” of le’umas ze (the side of impurity), into the “אף” of kedusha, “חמישית לפרעה” of kedusha of “אתפריעו ואתגליין מיני’ כל נהורין”.