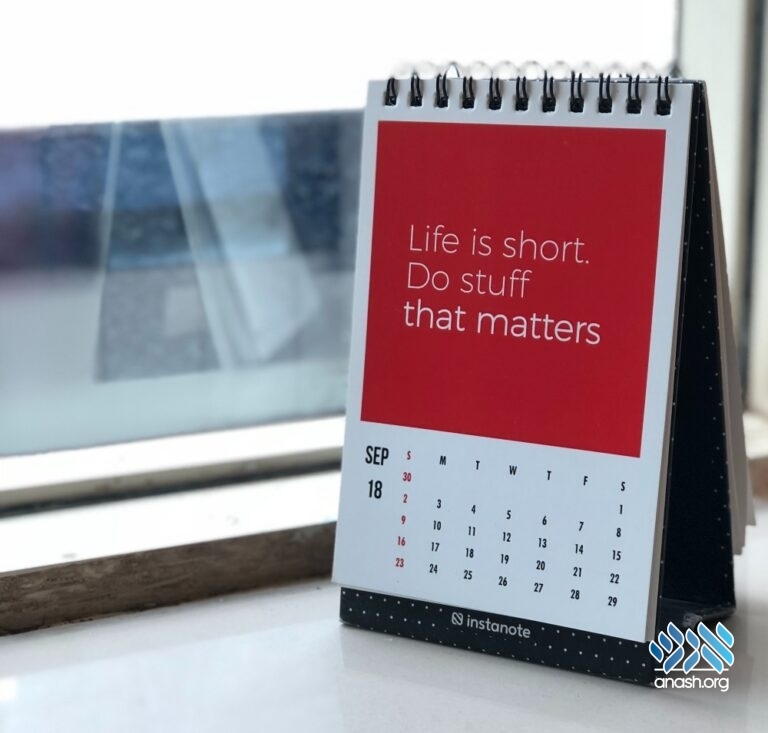 We begin each year telling ourselves, “This is going to be the year!”. And then? Comes the end of the 365-day cycle and – surprise. Turns out, it was not the year. Nothing special, just another year. So, how do we break this cycle?

You know what “hackneyed” means? It means a phrase that is so overused that it becomes cliché and unoriginal. It’s “that” vort that you roll your eyes and nod your head at when you hear a speaker begin to say it.

During this time of year, one big hackneyed vort is:

The פסוק says “מראשית השנה ועד אחרית שנה”, “From the beginning of the year to the end of the year”. The question is, why does the פסוק begin with “השנה”, “the year” and end with “שנה”, “year”?

And then? Comes the end of the 365-day cycle and – surprise. Turns out, it was not the year. Nothing special, just another year, adding to the collection of all the other years that have passed in my life. Just “year”.

That is the vort.

Great. So, how do we break this cycle?

For real though. We are about to start another year – הקהל no less! – and I Do. Not. Want. this to be just another year! How do I make this truly be the year?

The answer (Ok fine, maybe not “the answer”, but “an answer”) lies hidden in a דקדוק lesson on a פסוק in this week’s הפטורה. Bear with me; it is fascinating.

For the past six weeks, we have been reciting הפטורות known as “שבעה דנחמתא”, seven הפטורות of consolation. From after תשעה באב, we have been strengthening our spirits and seeking solace for our saddened souls in the soothing sections of ישעי’ הנביא. Prophetic pesukim such as “נחמו נחמו עמי”, “שאי סביב עיניך” and “כי נחם ה’ ציון” were pumping on our playlists, providing powerful positivity for the past month and a half.

This week’s הפטורה is the final one of the seven. In the glowing rays of the sun setting on 5782, we wrap up the year and read “שוש אשיש בה’!”.

Personally, I have always connected to a certain פסוק in this הפטורה. It reads: “…ושנת גאולי באה”, “…and the year of my redemption is coming”.

The end of a year naturally evokes a certain sobriety. I recall shivers running up my spine many a year while hearing this פסוק, thinking, “Yes! This coming year will be the year! Hashem, this past year had its ups and downs, but I’m looking forward to a year of redemption!”

What an inspiring פסוק; a hopeful optimism for a better tomorrow! Right?

There is a fundamental רש”י in פרשת ויצא (כט, ו), explaining the difference in דקדוק between the two times “ורחל באה” mentioned in those פסוקים: If the word “באה” is מלעיל, meaning the emphasis is on the earlier letter (the ב), it is past tense; meaning “רחל came”. If the word is מלרע, meaning the emphasis is on the later letter (the א), it is present tense; meaning “רחל is coming”.

So, one year, as I was reading our פסוק in the הפטורה, it finally hit me. באה. Literally, the same word as in פרשת ויצא. So, after double-checking the רש”י there to ensure I recalled the rule correctly, I went back to see how it is written in our הפטורה.

Mind-blowing. In our הפטורה, the word is מלעיל. Meaning, the נביא is saying, “…and the year of my redemption came”!

You see, this פסוק, read on the eve of the new year, is not a forecast for a fantastic future. It is clarion call for the current. The redemption is here! It is not “coming” – it already came! The year of redemption already began some 360+ days ago, on ראש השנה תשפ”ב.

Yes, this is the last Shabbos. Yes, there are only a handful of days left to this year. But, as faithful Jews, as vibrant Chassidim, we adamantly cling to our stubborn belief that “אחכה לו בכל יום שיבוא”, and as the רבי repeatedly explained, we believe, every day, that משיח will come today. Today.

Redemption, personal redemption, takes place in the rote and routine of regular today; not relying on the ruse of respite in rosy tomorrow.

A few weeks ago we read, “תמים תהיה עם ה’ אלקיך”, live a wholesome, simplistic life with Hashem. How does one do so? In רש”י’s words there, “לא תחקור אחר העתידות”, “Do not inquire into the future”. While the calendar still reads תשפ”ב, even if for just one more day, then תשפ”ב – not תשפ”ג! – is the year of redemption, growth, action, and change. Why are you peeking ahead and wistfully dreaming of a better tomorrow?! Wake up today and קער א וועלט היינט!

Perhaps that is the answer of how to make this year be the year.

By not dreaming for the perfect opportunity to arise in the future, and instead, by recognizing that the opportunity already came in the past, and is waiting in the present to be utilized.

You have a goal? Don’t start tomorrow. Don’t wait for “next year”. Start it now. Start חת”ת/רמב”ם today, even if it is in middle of a cycle.

Indeed, the Rebbe advised at Farbrengens, when one wants to translate their inspiration into action by taking on a החלטה, they should begin their החלטה טובה immediately after the Farbrengen.

Like when you set a new password and want to remember it, they advise not to wait for the next time you will need to use it, rather to practice using it right away. It helps concretize it into your routine.

How to make this year be the year? By making each moment be the moment. By aligning long-term goals with short-term commitments, utilizing every individual day.

Do not wait around for the year of redemption to come. Redeem the year that already came.