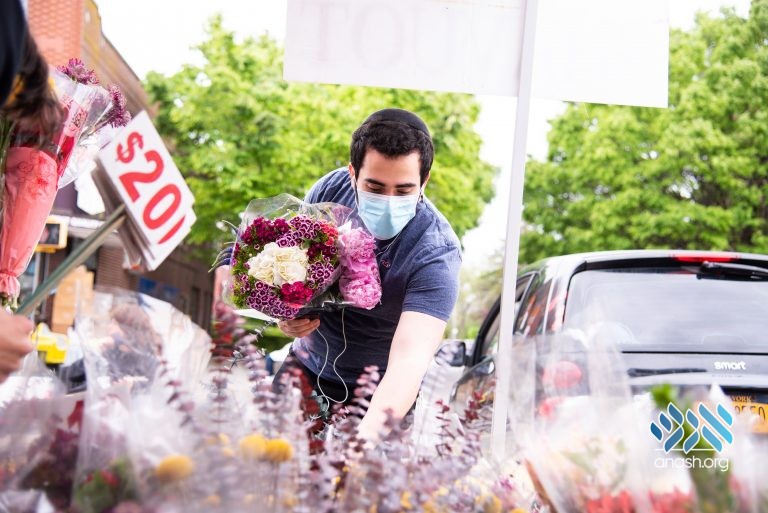 From the Anash.org inbox: A Crown Heights resident writes his concerns over the lack of face coverings in public, and why it is important that the community wear them.

I am a baal teshuva who has called Crown Heights home for several years. Far more than a physical home, this has been my first true spiritual home as well. Words cannot describe the debt of gratitude I owe to the many families, mosdos, rabbonim, mashpiim, and countless kind souls that have welcomed me and my family with open arms.

My love for this community grew even stronger when I saw Anash confront the COVID-19 pandemic head first with achdus, compassion, and decisive action. We locked down well before the rest of the City. Rabbonim made swift but difficult decisions to close the spaces we cherish so much. A volunteer service sprang up on WhatsApp to coordinate errands for people in quarantine. While we lost some 53 chassidim during this difficult period whom we will never forget – I am confident that our community has emerged from the pandemic stronger than ever before.

Precisely because of my love and passion for the shchuna must I discuss something that has bothered me in recent weeks – the lack of face coverings in public. Let me explain:

New York State currently requires face coverings to be worn in public where social distancing is not possible. Practically, most of the City’s population has become accustomed to wearing a mask or other face-covering at all times when outside, and in a store or other place of business.

For the most part, communities around New York City are abiding by this requirement. I have seen this on my many walks and bicycle rides around the City. There are always exceptions here and there, but the majority of people are walking on the street with some covering over their face.

One of the exceptions to this rule I have seen has been in heimishe communities, where it seems like the majority of people are not wearing masks. Therein lies my concern: We Yiddin are supposed to be examples for the rest of the world. And for the most part, we are. For example, I rarely here foul language in Crown Heights, Baruch Hashem. I notice this difference when I spend time with my non-Jewish or non-religious acquaintances. Similarly, the extra focus on honesty in daily life that I see in Crown Heights – including returning lost objects, not overcharging others, and similar practices – are a constant reminder of why I’m proud to be an observant Jew and to call Crown Heights home.

Therefore, I believe that the lack of mask wearing must be rooted in certain attitudes or opinions that are not, Gd forbid, solely about rebuking the authorities or disregarding the concerns of others. So I would like to offer responses to three common arguments that I have heard against mask wearing, with the following preface:

The purpose of a basic face covering is not to protect yourself, but rather to protect others around you. When the vast majority of people are wearing masks, that creates an additional layer of protection for people in a crowded space. As I understand it, the only mask that would protect a virus from coming into you would be one of the N95 strength masks, which are really meant for hospital workers.

With that being said, let’s address some of the concerns and objections to face coverings:

1) Masks don’t do anything – they’re useless
It is true that large-scale scientific studies on humans have not been conducted to allow us to say with 100% certainty that the mask will “do its job.” That being said, reputable studies on animals with masks have been done which show positive results. But more importantly, there’s a certain basic svara – logic – that goes into wearing a mask that we can all connect to, as follows:

Think of when you’re sitting around other people in conversation – occasionally you’ll get a small drop of spit from someone in your face when they speak quickly. Or, you may notice they have what to work on in terms of maintaining a good-smelling breath. It’s basic logic that when you put on a face covering, you’re stopping at least some of the particles inside you from being released right in front of you. COVID-19 is a respiratory virus, and all agree that that is the primary method of transmission.

I’ve heard this one a few times. People sometimes say that the mask or face covering will prevent your carbon dioxide from being properly expelled when you exhale, and could harm you. I haven’t seen any credible evidence that this is the case, but I’m all ears to learn more. Maybe I’m naïve, but I think that if this was a real concern, you wouldn’t see the majority of health organizations, doctors, and epidemiologists advocating face coverings for the healthy.

3) I already had COVID. So did everyone in Crown Heights. We have antibodies, so why should we wear masks?

This is a compelling argument, even though we don’t know for sure whether antibodies are a sign of long-lasting immunity (I pray and hope it is). The issue is that we live among non-Jews and others who pass through our streets, and they’re not all aware of this. I have personally overheard non-Jews muttering to themselves about how it’s a shame that many people in the neighborhood aren’t wearing masks.

Moreover, if sizeable numbers of Crown Heights residents aren’t wearing masks, and some people visit our community and adopt a similar behavior as a result, there may still be the risk of new infection spreading.

On a positive note, I think the lack of mask wearing may show how we are truly ein mishpocha of Chassidim. Just like you wouldn’t wear a mask among your family members at home, so too do Chassidim see each other as brothers and sisters with an eternal bond.

And nobody disputes that we are living in an alma d’shikra – a world of falsehood. This is galus, plain and simple. It’s a world where politicians can harshly threaten religious communities for opening shuls or holding funerals, while praising large gatherings of protesters (including several maskless ones).

That being said, we can still do our part to make a Kiddush Hashem and lead by example by covering our faces as much as possible in public, just like we lead by example in so many other facets of life. With Hashem’s help, the rule on the books requiring masks will be short-lived as this virus will be eradicated from the Earth. Then, the suffocating and oppressive mask of galus will be lifted from us once and for all, with the coming of Moshiach speedily.