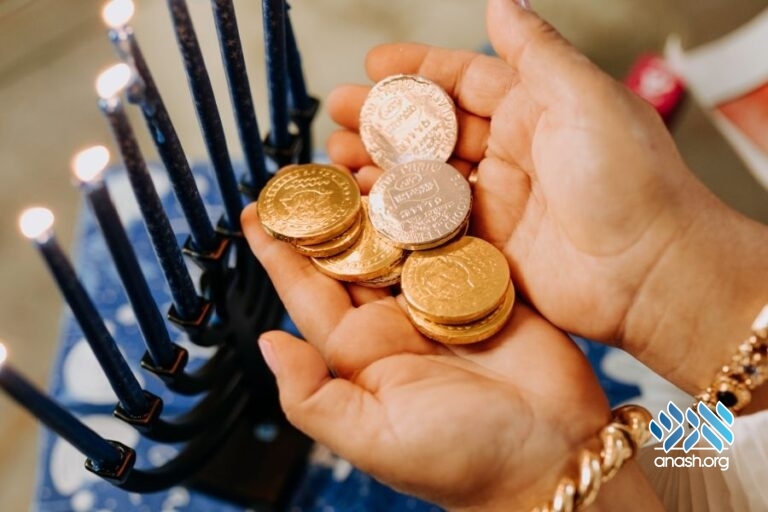 Is there a reason to give Chanukah gelt over gifts? The Yevanim were happy for Yidden to have lots of money, as long as it translates into more materialism. Chanukah gelt is the antidote to Yevani gelt.

Is there a reason to give Chanukah gelt over gifts? If the objective is to increase joy, why not give gifts, like the Shulchan Aruch says to do for other yomim tovim? Money seems especially meaningless for children from affluent families who already have all the money they need or want.

During the days of Chanukah 5735 (1974), the Lubavitcher Rebbe sent his chassidim to visit Israeli army bases and outposts to share the light of Chanukah. Several weeks later, an Israeli soldier wrote a letter to the Rebbe thanking him for the visit and for the two Chanukah gelt coins which the Rebbe sent to all soldiers. In the Rebbe’s response letter [1] to this soldier, he shares a very rich insight into the minhag of giving Chanukah gelt.

The Rambam describes what the Yevanim did to the Yidden:

“The Greek kingdom issued decrees against the Jewish people, [attempting to] nullify their faith and refusing to allow them to observe the Torah and its commandments. They extended their hands against their money and their daughters; they entered the Sanctuary, wrought havoc within, and made the sacraments impure.”

The fact that they defiled the Beis Hamikdash and didn’t destroy it captures the essence of what they wanted with all their decrees. The ultimate objective of the Yevanim was not to take Torah away from us, but to strip Torah of its holiness. Study Torah as you would any other intellectual work, but not as a G-dly wisdom. Similarly, they didn’t want to kill the Jewish girls but rather desecrate their sanctity. Be married and have families, but do it the same way we do it, devoid of any holiness.

And likewise with regards to the Jews’ money. The Yevanim didn’t want to steal our money, they wanted to corrupt it.

Money is the symbol of materialism. After all, it’s the means by which to acquire all material goods. The Yevanim are happy for Yidden to have lots of money, as long as this money translates into more materialism. They want us to focus on money and worship it. They know that a strong focus on gashmius results in becoming desensitized to kedushah. They want our money to make us self-absorbed, thus creating barriers between us and our fellow Yid.

Chanukah gelt then is the antidote to Yevani gelt.

The objective of giving gelt is to teach the true value of money. Along with the money, the recipient should receive an education on how best to spend it. Chanukah gelt is their introduction to the materialistic world and this is an opportunity to give them the guidance they’ll need for life.

We can begin by teaching our children which purchases are appropriate for a Yid and which are not. This is also an opportunity to teach them about tzedakah. This is when they’ll learn that money doesn’t have to create distance between us and others but, on the contrary, it can bond us. Now’s the time to explain that through giving tzedakah we not only elevate the money given but also the money remaining. If the money we give is relative to how much we have, i.e. ma’aser or chomesh, then the money we have is the facilitator of what we give.

Gifts lack all the above richness, no pun intended. They’re about the recipient and don’t have as much potential of sharing with others that money has. To be sure, the Yevanim would probably not feel as threatened by Chanukah gifts as with money that’s earmarked “Chanukah gelt.”

And so, the more affluent a child is, the more crucial and meaningful the lesson of Chanukah gelt becomes.

This message is especially pertinent in a year of Hakhel when we’re encouraged to bring unity amongst Yidden. The more we give in the right way the more unity we foster.

May Hashem bless all Yidden with an abundance of gelt to be spent on good, holy, and happy things and may we be zocheh to see the lighting of the menorah in the third Beis HaMikdash this very Chanukah!