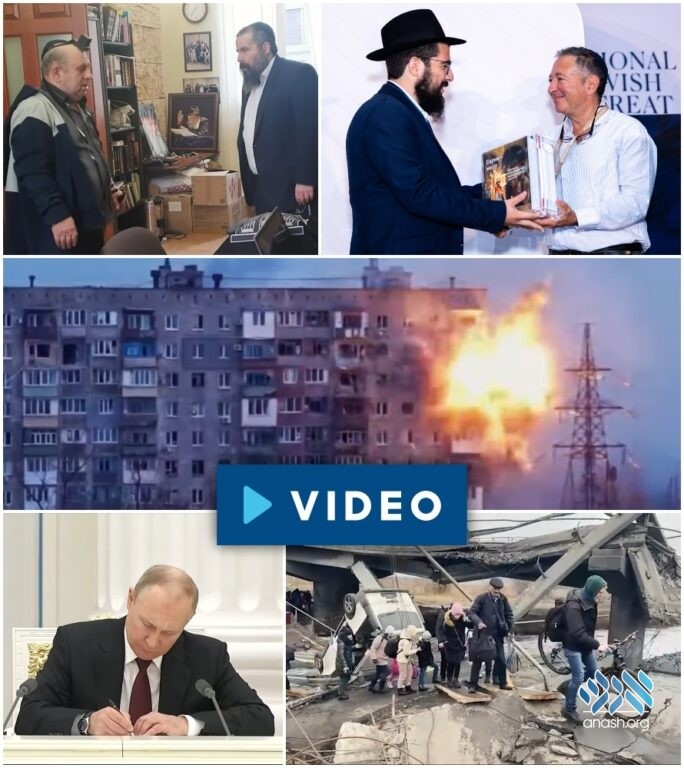 Shliach Rabbi Mendel Moskowitz told the attendees of the National Jewish Retreat of his family’s harrowing experience in Kharkiv, Ukraine, as bombs exploded overhead, and the secret of their continued dedication.

In the throes of the war that is still tearing through Ukraine, Rabbi Moshe Moskowitz can be found walking the streets of Kharkiv, giving an encouraging word to one beloved community member, a medicinal or food package to another, and helping yet another don tefillin.

The second largest city in Ukraine, Kharkiv was the target of terrible bombings and devastation and is also the city that the Moskowitz family has called home for more than 30 years.

When war struck Ukraine, the network of nearly 200 Shluchim, already providing spiritual and physical resources to their communities, sprang into action. With dedication and the financial assistance of fellow Jews worldwide, they arranged and led buses, trains, and convoys of escaping refugees. Those who remained behind were provided with the basic necessities they were lacking: food, water, and shelter.

Rabbi Mendel Moskowitz joined the National Jewish Retreat in Miami and shared a chilling account of the bomb that fell only feet from his family’s home, forcing them to flee the city, although never once dropping their efforts to help the Jews of Ukraine.

As Mr. George Rohr presented him with a beautiful set of JLI courses translated into Ukrainian, Rabbi Moskowitz answered the question he is most commonly asked when speaking to spread awareness for the situation in Ukraine: Why? What keeps his family going, risking their lives and extending tireless efforts to help the Jews of Ukraine?

“The US was asking its citizens to leave, Israel was asking its citizens to leave. We knew that there were 150,000 soldiers stationed near our home,” Rabbi Moskowitz said. “One man, the Lubavitcher Rebbe, taught us what it means to truly love and care for another Jew. The Rebbe cried bitterly at farbrengens for the Jews left behind the Iron Curtain”

In the spirit of the Rebbe’s care and concern for every yid, shluchim like the Moskowitzes continue this mission and provide light and assistance to the darkened streets of Ukraine.

The poignant session concluded with a blessing for the safety and peace of the Moskowitzes and all Jews of Ukraine.