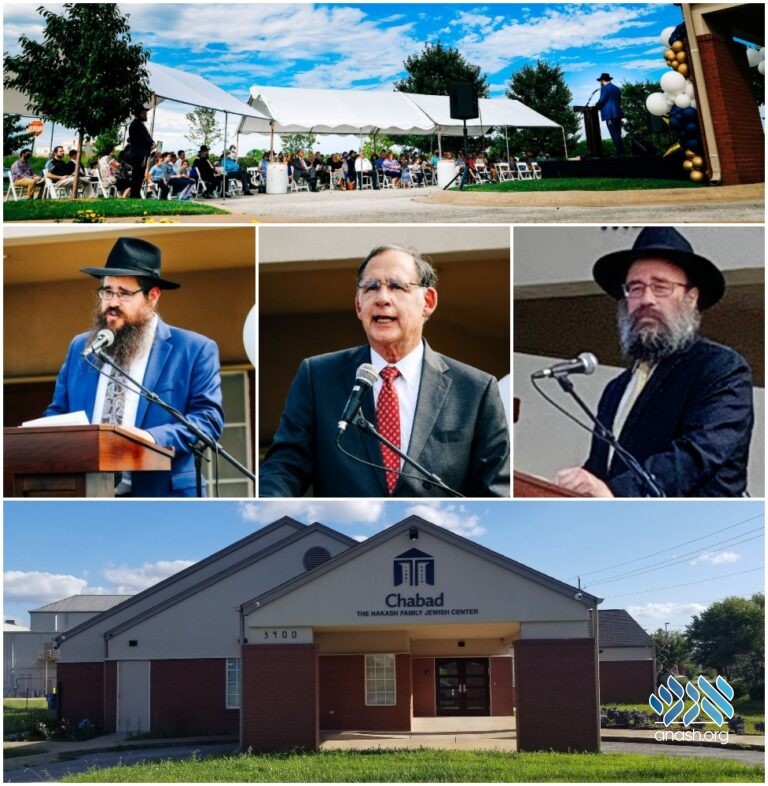 As US Senator John Boozman put it, it was a “very, very good day for Northwest Arkansas.”

A large crowd gathered this past Sunday to dedicate the brand new Chabad House and Jewish Center servicing the needs of the growing Jewish community of Northwest Arkansas. Chabad, directed by Rabbi Mendel and Dobi Greisman, has been providing services to the local community and visitors since 2005. And now, the new Chabad House – the Nakash Family Jewish Center, will host all of their programs and activities.

“For many years, we have been operating out of our home and renting different venues,” said Greisman, “to finally have a permanent home with so much space and versatility is a true blessing.”

Launched in 2017, Greisman and the local Chabad community held a campaign to raise funds to construct the new center. Many local families contributed, as well as visiting Walmart vendors who conduct business with the giant retailer, whose corporate headquarters are located in Bentonville, Arkansas.

While construction concluded some time ago, the pandemic has delayed the dedication and opening. The community, eager to finally be able to emerge from the shadow of the coronavirus pandemic and safely celebrate together, was visibly excited during the Grand Opening event. In addition to the local community, celebrants included Chabad representatives from throughout the region, elected officials including US Senator John Boozman and Bentonville’s Mayor Stephanie Orman, local lay leaders and guests from as far as Sonoma County, CA. Congressman Steve Womack sent a congratulatory letter.

Dr. Joel Spalter, a leader in the community, spoke of the unique Chabad approach to embrace the authentic tradition of our timeless heritage, welcoming every single Jew and cherishing every opportunity to create a Jewish connection and Mitzvah. Referring to the Synagogue’s beautiful furniture imported from Kibbutz Lavi in Israel, where he and his wife Irene volunteered as newlyweds, Spalter noted that “this synagogue is a place where you can spiritually and literally touch the land and people of Israel, [and] this connection is an absolute necessity for the thriving of worldwide Jewry.”

Several participants profusely thanked the Nakash family of New York, who generously contributed to this new Shul, dedicating it in their family’s name, stating that “the investment of the NY vendors in our community’s Synagogue, is the embodiment of the adage that “all Jews are guarantors for one another.”

Senator John Boozman opened his public remarks by saying that this celebration is a way for all of us to dedicate ourselves to the power of community, the power of tradition and the power of faith. The senator mentioned how our national motto, ‘E Pluribus Unum – out of many, one’ means that while we all come together with our different backgrounds, it is fundamental that each of us retain the right to believe and live as we wish, and that brings us to “the vision of Chabad of Northwest Arkansas, to build the infrastructure for Jewish people to identify with and enhance their Judaism with, and I say Amen to that.”

The senator concluded his remarks with a quote from the Lubavitcher Rebbe that “to be kind is more important than to be right. Many times, what people need is not a brilliant mind that speaks but a special heart that listens.”

Speaking to the many in attendance, Rabbi Greisman was ebullient. “By divine providence, today is the day on the Hebrew calendar that the previous Lubavitcher Rebbe dedicated the first—and still current—Chabad world headquarters, in Brooklyn, back in 1940.” Greisman then continued, “the Rebbe’s vision and confidence that Judaism will thrive in this country well after the embers of the Holocaust have burned rings truer now than ever. That a sprawling complex, replete with a synagogue, social hall, classrooms and library should exist in this corner of our country is a testament to the success of the Rebbe’s efforts.” He then continued to describe the sacred honor and privilege it is to be a part of what became a spiritual home to so many in the community and experience lifecycle moments and holidays with each one of them.

The community has been anticipating the opening of this Synagogue for a long time and the Grand Opening, just days before the Jewish New Year and Rosh Hashanah, breathes a fresh life of a new spiritual beginning and excitement for what the future holds. As Mrs. Dobi Greisman commented “I am full of gratitude for the past, for what G-d has blessed us to be able to accomplish, and I am very excited for what the future of our community holds. We hope that you will come in and participate on a regular basis and thus create a much stronger bond and connection with our Jewish heritage.”

To participate in the grand opening campaign for Chabad of Northwest Arkansas, please visit Jewishnwa.org/opening.