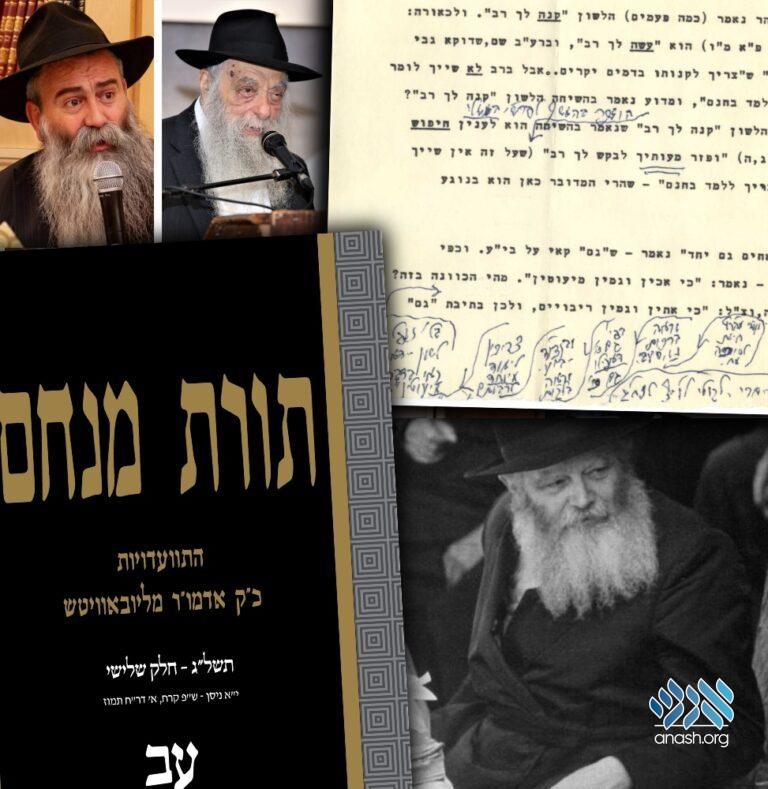 As Toras Menachem volume 72 went to print, a phone call arrived which stopped everything in its tracks. A answer from the Rebbe had arrived, forty-seven years after it was written.

In recent months, the team of Chozrim and Manichim at Lahak Hanochos have been working around the clock to prepare Toras Menachem volume 72 for release before this coming Yud Alef Nissan, which will mark the beginning of the Rebbe’s one-hundred-twentieth year.

This Yud Alef Nissan also marks another important milestone: It is the fortieth anniversary of the formation of Lahak Hanachos, the organization established with the goal to publish all the Rebbe’s Torah in Lashon Hakodesh in an organized fashion. The first pamphlet released – after their official formation – was the Farbrengen of Yud Alef Nissan 5741.

The pages of volume 72 had already begun to pass through the printing machines of Yad Hachamisha in Eretz Yisrael under the able supervision of Reb Bentzy Sheinberger, when an urgent call came in from 770. It was Rabbi Chaim Shaul Brook, the director of Lahak Hanochos, who breathlessly instructed him to “stop the presses.”

In an amazing event of Hashgacha Pratis, a certain member of Anash had appeared at Lahak’s office holding a selection of kisvei yad kodesh which he had collected over the years. He had decided to donate them to Lahak for the purpose of sharing those invaluable texts with the public. A quick glance at the papers caused Rabbi Bruk to miss a beat.

It was a note written to the Rebbe by Reb Yoel Kahan, the Rebbe’s Chozer, asking about unique wording the Rebbe used at a certain Farbrengen “kinei lecha rav,” while the original term in the Mishna is “aseih lecha rav ukinei lecha chaver.” Another question was regarding a phrase the Rebbe used during a recent Maamar, “ki achin vigamim miutin,” which perplexed the chozrim at the time. On the note, in a zigzag fashion going back and forth, the Rebbe wrote his answer in detail.

Unbelievably, those very Sichah and Maamar were included in the newest volume that had just gone to print!

Apparently, the answer had never reached Reb Yoel Kahan and was therefore not included as a footnote in the transcript of this farbrengen. A decision was quickly made to stop the presses and reorganize the farbrengen based on the newly discovered answers.

The team at Lahak was overjoyed to make such an unbelievable discovery at just the perfect moment – 47 years after it was written, but right before the sefer went to print. Rabbis Yisroel Shimon Kalmenson, Mendel Kaplan and Aharon Leib Raskin began to immediately work on deciphering and understanding the answer, along with chief editor Rabbi Dovid Feldman. They were also assisted by Otzar Hachassidim editors Rabbi Eliyahu Matusof and Rabbi Dovid Olidort.

Despite the unexpected but exciting delay, great efforts were invested to move on with the printing so that the first copy would make it to the Ohel on Yud Alef Nissan.

With Hashem’s help, the new volume will be available for purchase in Eretz Yisrael and around the world after Pesach. Members of Lahak’s subscription club will receive it directly to their homes.