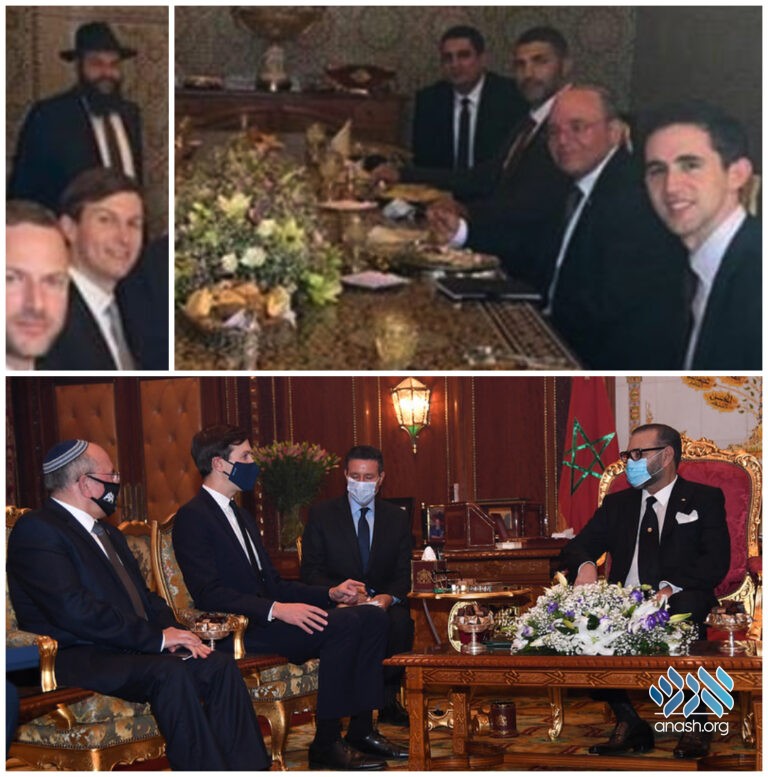 In keeping with true Arabic Abrahamic tradition, King Mohammed VI of Morocco wished to serve kosher food for the recent delegation from US and Israel. To do so, he needed some help from the local shliach…

Following true Arabic Abrahamic tradition, King Mohammed VI of Morocco extended the royal treatment, literally, to the delegation of American and Israeli dignitaries who visited the palace in the capital of Rabat for an overnight stay last week. Wishing to give his guests the full Moroccan experience, the king insisted that the kosher meals served be prepared by the palace chefs.

To do so, the palace contacted Rabbi Levi Banon, who has served as Chabad-Lubavitch emissary in Morocco since 2008 to kosher the royal kitchens and oversee the food preparations for the two banquets served.

A picture of the dinner, in which Banon can be seen standing behind the guests, was shared on social media by Avi Berkowitz, who serves as assistant to the president and special representative for international negotiations and is a close aide to senior White House adviser Jared Kushner.

To the delight of those assembled, Israeli national security adviser Meir Ben-Shabbat, who is a native of Casablanca, spoke at the dinner in the local dialect of Arabic while proudly wearing a kippah on his head.

Morocco is now the fourth Arab nation to agree to the normalization of ties with Israel in recent months following the Sept. 15 signing of the U.S.-brokered Abraham Accords with the United Arab Emirates and the Kingdom of Bahrain. Sudan followed suit a month later.

The Jewish community of Morocco, which has had a Chabad presence since the late 1940s, is home to 3,000 Jews. While there are kosher restaurants and catering services in Casablanca, where the majority of the Jews live, there is none in the capital city of Rabat.

In a 1985 correspondence with King Mohammed VI’s father, King Hassan II, the Rebbe wrote: “May G‑d continue to bestow His generous blessings on your Majesty and royal family, and all the people of Morocco, for a full measure of health and prosperity, both materially and spiritually.”