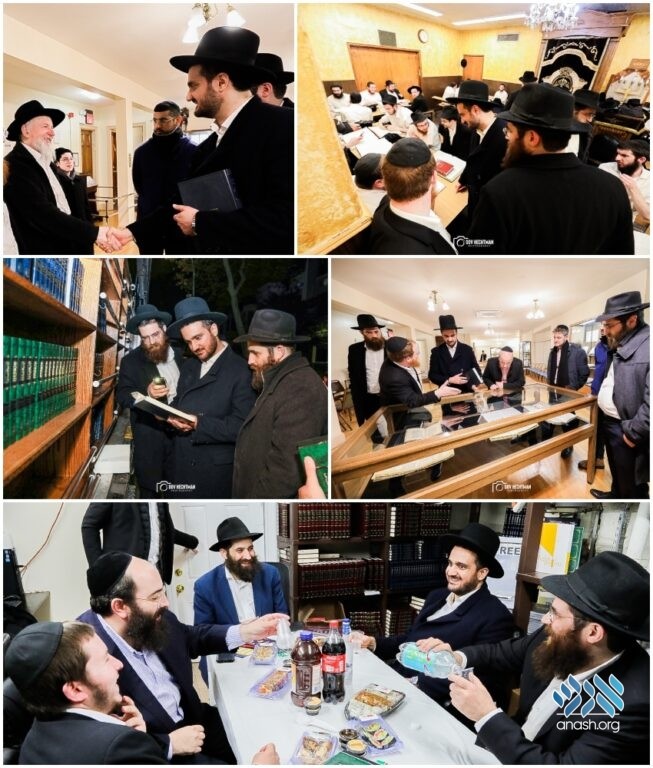 During a meeting with a Crown Heights-based organization, Rabbi Yehuda Gerami, the Chief Rabbi of Iran, urgently called his secretary in Iran despite it being after midnight.

Rabbi Yehuda Gerami, the Chief Rabbi of Iran who is currently visiting New York on a special visit coordinated by Merkos 302, visited the yeshiva at 770 Eastern Parkway, the Rebbe’s library, and the offices of the Or Hachasidus.

The Chief Rabbi visited the upstairs zal of 770 and engaged with the bochurim in learning. He was then given a tour of the WLCC room by Rabbi Chaim Boruch Halberstam, and a tour of the Rebbe’s library by Rabbi Mendel Eisenbach of WLCC, accompanied by Rabbi Zalmy Lowenthal from Merkos 302. At the library, he was greeted by chief librarians Rabbi Sholom Ber Levin.

At the offices of Or Hachassidus Rabbi Gerami was moved when Rabbi Avraham Mann, director of the organization presented him with the daily letter from the Rebbe that is sent daily on WhatsApp in many languages, and offered to translate the daily letter into Persian.

Instead, Rabbi Gerami himself asked for a sheet of paper and a pen, chose one letter from the daily letters, and translated it on the spot into Persian. He then called his secretary to share the news about the new project initiated by the Merkos 302 and Or Hachassidus, while praising the great encouragement that the Jews of Iran will draw from the Rebbe’s letters.

Rabbi Mendy Drookman gave the chief rabbi an overview of the activities of Or Hachassidus and the Baderech truck which brings Sifrei Chassidus to frum Jews of all backgrounds who might not have access to it. Rabbi Gerami shared his excitement at the use of modern technology for holiness through the giant screens advertising the books all over Jewish New York.