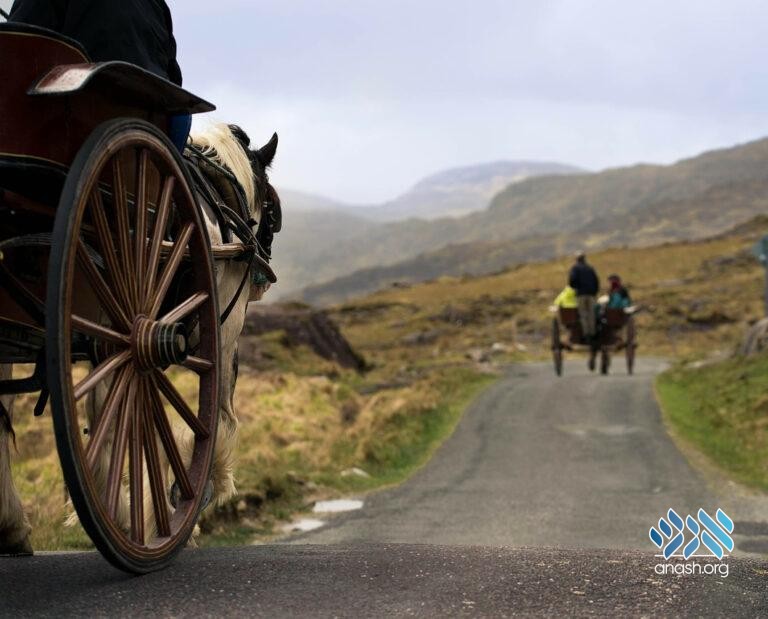 Motzei Shabbos Story: Zelig felt distant from his Judaism and contemplated his next move. Then he took a trip to his Rebbe. But a well-intentioned shout almost had him abandon Yiddishkeit.

Zelig was a simple, unlearned Jew, who lived in a small isolated village and earned his livelihood by running an inn. Now and then, he would travel to the righteous Rabbi Mordechai of Neshchiz (Niesuchojeże), one of the leading Chassidic rebbes in Volhynia.

Zelig chanced on a good business deal one day, which yielded a hefty profit. With this profit, he invested in other ventures, each of which was quickly successful. Within a few months, the humble innkeeper was on his way to becoming a magnate.

As Zelig was now far busier, the trips to his rebbe became less frequent, and then stopped entirely. His once-warm heart began to cool, and he became disconnected from Torah study and mitzvah observance.

In the deep recesses of his heart, he was still drawn to his old way of life, but he acted like the gentile nobility with whom he now rubbed shoulders. Dissatisfied with having one foot in each world, he decided to renounce his Judaism and convert.

Before acting on impulse, he decided to visit his rebbe, whose reaction would determine his next move. “If the Rebbe rejects and scorns me, I will know exactly how to proceed,” he thought. “But if he accepts me despite my shortcomings, I will change course and remain a Jew.”

One morning, the Rebbe summoned his beloved and devoted student, Reb Naphtali Tzvi of Ropshits (Ropczyce), who spent time studying under the guidance of his master, and instructed him to pack his bags and go back home. Reb Naphtali began to cry. “What did I do wrong? Why are you sending me away?”

“Do as you are instructed!” the Rebbe replied.

Distraught, Reb Naphtali Tzvi approached Reb Mordechai’s wife and begged her to intercede on his behalf. She asked her husband for an explanation for the sudden expulsion of his beloved student.

“Not everything is revealed to me; I myself do not know why,” Reb Mordechai responded. “But I remain firm in my wish that he go home.”

The rebbetzin continued pleading until Reb Mordechai gave in. “I see Naphtali is heartbroken, and you are advocating for him. I will retract my instructions and he may stay.”

Zelig arrived a few days later, his wagon loaded with gifts of choice produce and delicacies for his rebbe.

When Zelig entered, the Rebbe was not in his house but at the adjacent synagogue. Reb Naphtali Tzvi greeted Zelig, and, sensing his spiritual decline, immediately began to rebuke the newcomer: “How dare you show your face here in the holy court of our Rebbe when you are sullied in sin? Have you no shame?! Repent, and only once you have cleansed yourself, should you return to this sacred place!”

Suffering through Reb Naphtali Tzvi’s “welcome” was more than enough. Zelig made an about-face, climbed back onto his wagon, and headed out of town in a cloud of dust. “That’s it, there is nothing left for me among the Jewish people,” he thought.

With the wagon still in sight, Reb Mordechai exited the synagogue looking pale-faced and stricken. “Who was the person who just left?” he asked.

“What did you do?!” cried Reb Mordechai in shock. “Run after him with all your strength and tell him that I long to see him, longing with all my heart.”

Setting aside his churning thoughts, Reb Naphtali Tzvi sprinted after the wagon that was quickly receding into the horizon.

“Zelig! Come back. The Rebbe is calling you.” Reb Naphtali Tzvi bellowed with his remaining strength. “The Rebbe longs to see you! With his whole heart, he is longing for you.”

Zelig heard the cry and stopped his wagon, turned around and rumbled back into Neshchiz.

Reb Mordechai himself stood at the door and greeted Zelig with open arms and a radiant face.

“Shalom Aleichem, my dear Zelig!” he beamed as he ushered him into his office. A long time passed before Zelig exited the Rebbe’s office, his face was aflame and his eyes wet with tears.

After Zelig departed, Reb Mordechai called in Reb Naphtali Tzvi and said, “I see my hunch to send you home was correct.” Naphtali did not dare raise his eyes. “Do not take it the wrong way,” continued Reb Mordechai. “I love you like a son. But today you almost expelled a Jew from the Jewish nation with your words.”

Reb Mordechai became pensive and explained. “The Jewish nation is like a tree with many branches. All the branches receive their life from the trunk, which in turn draws its life from the ground. Sometimes there may be an obstruction, a distant branch stops receiving nourishment and slowly withers up and can break off from the tree.

“Zelig recently began disconnecting with his life source. The Jewish vitality in his soul had dried up, and he was about to crack off the tree. If I had not showered him with an enormous amount of love, Zelig would have converted. By miracle, his soul was saved, and he is now firmly reattached to the Jewish family tree.”