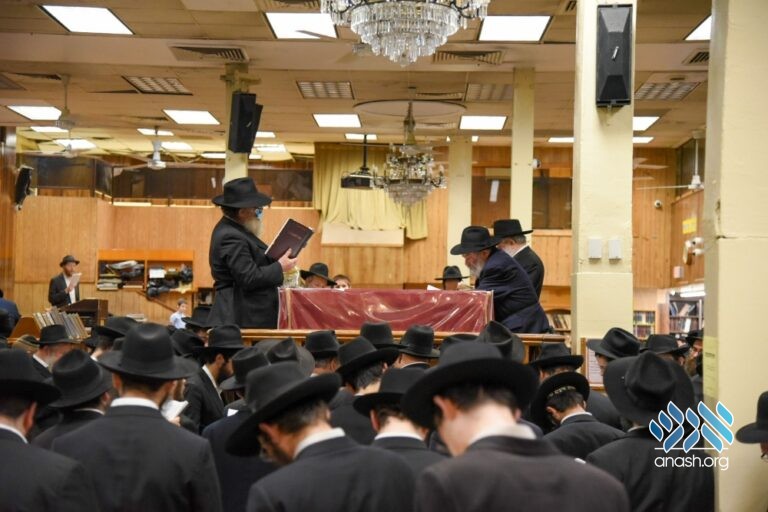 This past Shabbos, as the crowd at 770 waited for the Aron Kodesh to open, they were surprised to hear a bang on the bimah. Turning around, they saw that the bang came from the mara d’asra Harav Yosef Braun, who had a message to relay.

Why was the Aron Kodesh not opened for Krias HaTorah?  Instead, there was a bang on the bimah.  Everyone turned to the mara d’asra Harav Yosef Braun on the bimah.  The shul has become silent as he begins to speak, and although people might wonder at the interruption, the subject matter should not come as a surprise.

“The sicha of thirty years ago today,” the Rav cried out, “shook the Chasidim to the core.  It trembled through the entire Jewish world!”

“When this day comes around every year, we Chassidim wake up, remind ourselves of the sicha, organize events to commemorate the date, and then move on. However, the Rebbe warns us that just reviewing and studying the sicha is not the objective.

Regarding the takeaway from Rebbe’s words, the Rav divided the message into three distinct parts:

“In the weeks and months following, the Rebbe provided many suggestions,” Rabbi Braun continues, “But the most important thing is to actually do something, even a small thing. As the Rebbe expresses at the end of the sicha of 28 Nissan: he will now do something extra and give everyone a Shlichus, and gave all those present two dollars to give to tzedakah, so that perhaps this small act will be the maaseh echad—the last small thing—that is needed to make Moshiach come l’poel.

What small thing can we do? Say hello to someone you don’t usually greet….stay quiet during the reading of the Torah…. Or “do something additional in the realm of goodness and kindness,” as was the Rebbe’s message to the world through a CNN reporter—it can be something “good”  bein adam l’Makom or bein adam l’chaveiro.  Similarly, the next Shabbos the Rebbe spoke about adding in learning Torah and doing mitzvos b’hiddur to bring Moshiach.

Although the Rebbe speaks about the importance of strategizing in the sicha, he also makes it clear that we need to have akshanus. Translated into practical terms, this means doing something with persistence.

The doctor wraps up the yearly checkup with a warning that their patient’s health is suffering; they must stop smoking or perhaps go jogging every day. Some people would listen for a week or two, and then it’s too much for them and peters out or just stops. But some will stick with it—get up every morning despite the difficulty, ignore those who mock their efforts, even get their friends to join. What motivates them to do this? To be so consistent on a daily basis?

“Well,” they’ll tell you, these patients who have internalized their doctor’s message, “this is about my health—my life! How can I not take it seriously?!”