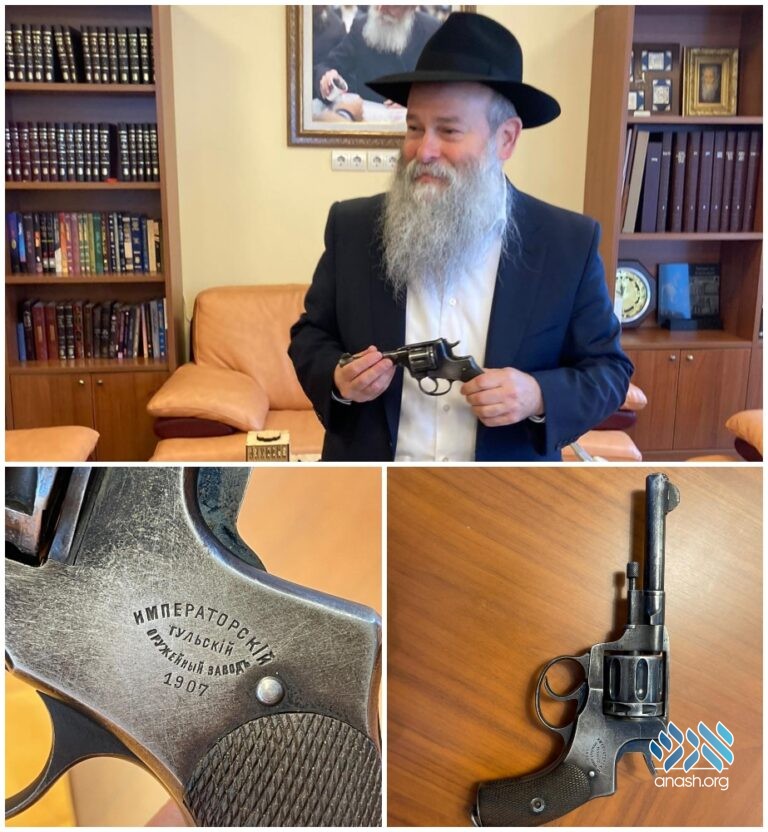 When a group of girls from the Swerdlov Program visited the Menorah Center in Dnepropetrovsk, Ukraine, Shliach Rabbi Shmuel Kaminetsky chose to show them a 114-year-old revolver he had recently acquired, and share the fantastical story behind it.

The girls walked in, and the rabbi pulled out a gun…

A group of Lubavitch girls, who were touring Ukraine as part of the Swerdlov Program, visited the Menorah Center in Dnepropetrovsk, where they met the country’s Chief Rabbi and Head Shliach Rabbi Shmuel Kaminetsky.

After they were treated to a tour of the building and sat down to speak with Rabbi Kaminetsky, he chose to show them an 114-year-old gun he had recently acquired, together with the fantastical story behind it.

The gun had first been discovered in the early 1990s in the central shul of Dnepropetrovsk, where Harav Levi Yitzchok Schneerson had served as rov, and his son, the Rebbe, had davened as a child and bochur. It had been concealed in the shul by a group of Jewish vigilantes, who had organized to protect the Jewish community from roving mobs and the Red Army and White Army, who were fighting for control of Russia following the Russian revolution of 1917.

But the revolver was more than just an interesting artifact from the city’s Jewish past.

According to residents who had lived in the city during that time period, the Rebbe, as a 17-year-old bochur, had joined the Jewish battalion, and had even served as a commander! Rabbi Kaminetzky shared with the girls that according to testimony he had heard from residents who had been in the brigade, the Rebbe had taken an active role in recruiting young teenagers to join the battalion, and residents called the group “Mendel’s Army.” And whilst the gun could have been used by any member of the battalion, the location where it was found, near the spot where Harav Levi Yitzchok and the Rebbe sat in shul, could perhaps be indicative that it was used by the Rebbe himself.

Following its discovery in the 1990s, the gun had been acquired by a collector. Recently, the collector passed away, and his widow gifted the gun to Rabbi Kaminetsky. The girls’ visit was the first time the gun has been showed to the public, each YTT camper got a chance to handle the gun.

Despite the fact that many would be delighted to acquire a piece of history as unique as this one, Rabbi Kaminetsky has no plans of letting the gun be lost to history. The revolver will be added to the collection of the Jewish Museum in the Menorah Center, and not be offered on auction, or make its way into the hands of another collector.