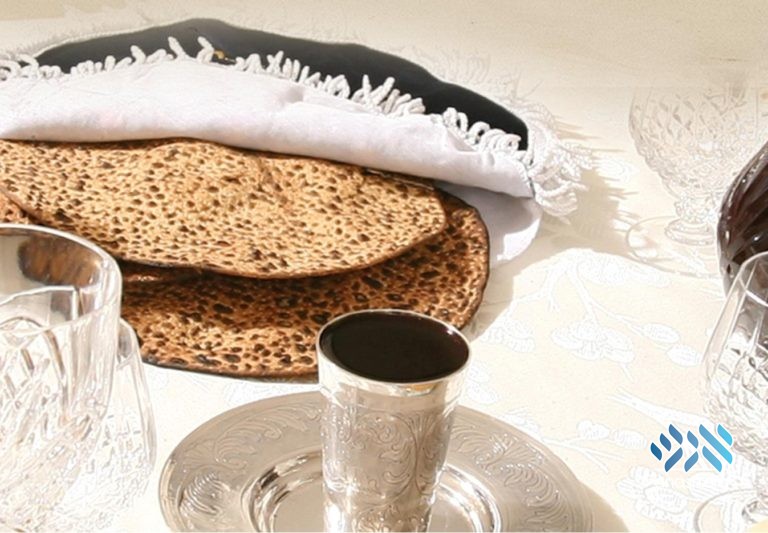 Rabbi Aryeh Citron explains the origins, customs, and significance of the Moshiach Seuda that we eat on the last day of Pesach.

It is customary among many Chassidim to have a meal towards the end of the last day of Pesach which is called in Chabad circles Moshiach’s Se’udah (feast). This feast and its name originated from the Ba’al Shem Tov and was publicized by the Rebbe Rashab and subsequent Chabad Rabbe’im.

The Gaon of Vilna had a similar custom. He would make a meal at the end of Pesach to fulfill the mitzvah of eating matzah one last time (Ma’aseh Rav 185). This was based on his opinion that when one eats Matzah anytime during Pesach, one is fulfilling a positive Mitzvah. As such, he wished to savor the mitzvah one more time. As such he did not have similar meals at the end of the other holidays as this which do not, obviously, have the mitzvah of matzah.

Many Chassidim who customarily have a festive meal at this time do so to celebrate the fact that the holy Ba’al Shem Tov was saved from a shipwreck on this day (Minhag Yisra’el Torah 490:8). The full story is recounted at the end of Nitei Gavriel, Pesach, vol. 3. The idea of celebrating on the day that a miracle occurred to one’s Torah teacher (Rebbe) is based on Orach Chaim, Siman 218. (See there in Sha’arei Teshuvah based on the Zohar and the Shela. See also Nitei Gavriel ibid, pg. 127.)

This article will discuss the meanings and details of the Moshiach’s Se’udah. It is based on the talks of the Lubavitcher Rebbe at various of his Moshiach’s Seudot (the years 1960, 1962,  and 1965).

Why the Ba’al Shem Tov?

Why was the custom of having a Moshiach’s Seudah first founded by the Ba’al Shem Tov and not earlier? The Zohar (vol. 3, 124b in the Raya Mehemna and Tikunei Zohar, end of Tikkun 6) says that Moshiach will arrive when the book of the Zohar will be learned and understood. Although Kabbalah was taught and disseminated by the Arizal and his students, it remained beyond the comprehension of the average person until the Ba’al Shem Tov and his followers taught it in a language that was comprehensible to everyone.

In truth Moshiach could have come immediately after the destruction of the Bait HaMikdash (see Eicha Rabba, 1:51), but such an arrival would have been considered an early arrival. Whereas once the Ba’al Shem Tov began spreading his teachings, Moshiach’s arrival is considered in “its time.” The Talmud (Sanhedrin 98b based on Isaiah 60:22 ) says that Moshiach can come Achishena (early) or B’ita (in its time). When Moshiach comes in its time, the revelations of the Messianic era will be of a higher quality than had he arrived earlier. This is a result of the increased amount of mitzvot and Torah revelations that took place over the extended exile which elicited and contnue to elicit a greater Divine revelation. As such, in earlier generations when it was not yet Moshiach’s time, there was no need to have a Moshiach’s Seudah. But now that we are awaiting a higher level of Messianic revelation, we need to prepare for him more vigorously. This feast is part of that preparation.

The Ba’al Shem Tov would invite everyone to the feast that he conducted at the end of Pesach. He would distribute some of the matzah he had personally baked (or matzah that had been baked for him) to all of the assembled, including the simple people.

One time during this meal he announced, “We need to place the angel Michoel (Malach Michoel) on the side. This angel is the guardian (sar) of the Jewish people as well as of the entire world. In his capacity as guardian of the Jews, he will always find something good to say about them even if it’s not so obvious. But in his capacity as guardian of the world, he sometimes stutters a bit (i.e., if there’s no obvious way to defend the world from Divine prosecution, he is sometimes silent.)

“According to my teacher [the Ba’al Shem Tov’s teacher was the prophet Achiya HaShiloni who would descend from heaven to study with him], we must also be involved in helping the world. As such, [at this time] we need to put Malach Micho’el on the side [so that the world will be judged favorably without any “stuttering”].” (Sicha of Acharon shel Pesach 1948, Sefer HaSichot 5708, pg. 220.)

How Is a Feast a Preparation for Moshiach?

The Divine revelation in the Messianic era will be unique, for then we will naturally see and comprehend G-dliness fully. The prophet (Isaiah 40:5) said, “All flesh will see that the mouth of G-d has spoken.” When a person sees something, he is (usually) able to immediately grasp the nature of that thing without needing to work hard. Similarly when Moshiach comes, our perception of the deepest levels of G-dliness will not take any effort but will be natural and part of who we are.

As such, it is appropriate that we prepare for this revelation with a feast of food and drink which are parts of the natural world. Consuming these physical things channel intense spiritual revelations to our physical bodies  to prepare us for the great upcoming revelations.

Why on the Second day of Yom Tov?

In general, one of the differences between Shabbat and Yom Tov is that Shabbat is a day which is Divinely ordained as a holy day. The Yamim Tovim, on the other hand, are days that would otherwise be weekdays but which are sanctified by the Jewish people who established (and who maintain) the calendar.

The concept of transforming a weekday into a holy day is even more pronounced concerning the second day of Yom Tov.

Concerning the second day of Yom Tov, the Midrash says (Shir HaShirim Rabbah 1:6), “Rabbi Yochanan says, the Jewish people said to Hashem, ‘Because I didn’t observe Yom Tov properly in the Holy Land, I was exiled and I have to observe two days of Yom Tov. I thought I would receive a reward for [observing] the extra day but in fact I only receive a reward for one day.’ Rabbi Yochanan applied the following verse (Ezekiel 20:25) to this, ‘I, too, gave them statutes that were not good and ordinances through which they should not live.’”

The Alter Rebbe in Likutei Torah (Maamorim on Shmini Atzeret 98c) explains the reason why those in the Diaspora only receive reward for one day. The Divine revelations related to each Yom Tov are absorbed in the Holy Land in one day because the air there is (spiritually) pure, but in the Diaspora, it takes two days to absorb these same revelations because the air outside of Eretz Yisroel is impure.

Despite this explanation, the fact remains that the second day of Yom Tov is a day which is a weekday by Biblical law, but the day has been transformed to a holy day by the strength of Jewish custom which was then enacted into law by our sages.

It is therefore appropriate to have Moshiach’s feast on the second day of Yom Tov as Moshiach represents the very nature of the world proclaiming G-dliness as explained above.

The expression “the last day of Pesach” signifies that this day is an opportunity to make up for any deficiencies that we may have had in our observance or in our spiritual experience of the previous seven days of Pesach.

The idea that the last day can “make up” for any deficiencies in the previous days is similar to what Moshiach will accomplish.

One of Moshiach’s tasks will be to gather all of the Jews who are scattered across the globe and bring them back to Israel. This physical accomplishment is a mirror image of a corresponding spiritual accomplishment which he will also do as he will gather and repair all of the lost spiritual energy in this world. During the present era, every time a Jew misuses his power of thought, speech, or action and commits a sin, he diverts his tremendous spiritual energy and channels it to unholy forces. Moshiach, who will inspire us all to do teshuvah, will bring about the release of all of this energy (in Kabbalistic terms called “sparks of holiness”) from the forces of impurity and return it to the realm of holiness. It is therefore appropriate that the day of the year associated with Moshiach, the last day of Pesach, is a day which can repair previous days which may have been lacking in their spirituality.

Customs of this Meal

Here are some of the customs that the Lubavitcher Rebbe introduced or encouraged regarding this meal (from Otzar Minhagei Chabad):

May Moshiach come immediately with Divine kindness and mercy!