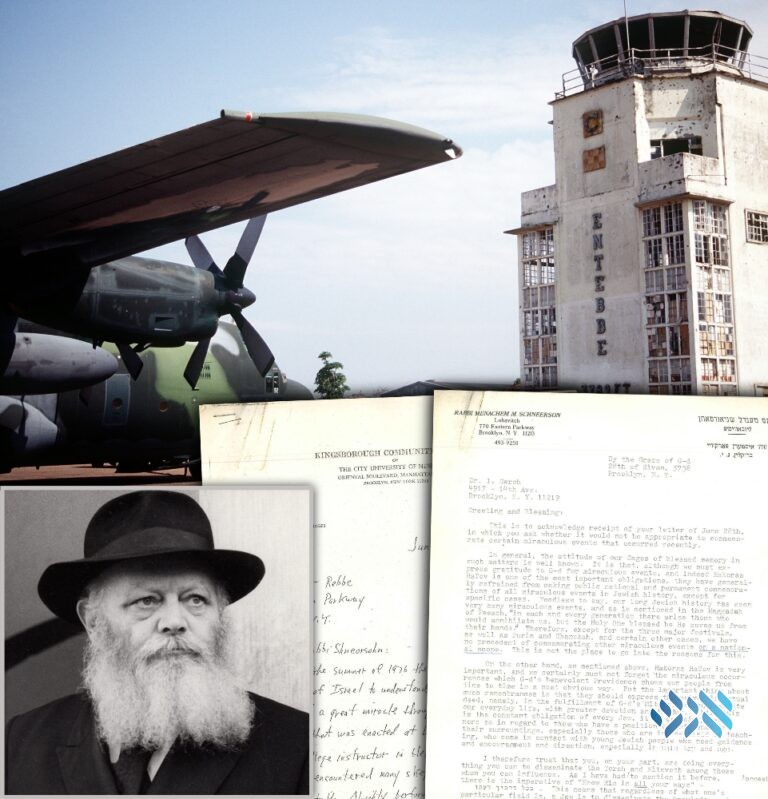 Two years after the miraculous events of Operation Entebbe, a frum college professor wrote to the Rebbe suggesting the establishment of a day of commemoration. The Rebbe responded with a detailed letter in English. Pirsum Rishon.

Tammuz 5736 was an euphoric time for Jews worldwide. A group of Jews slated to be murdered by terrorists were miraculously saved in the fantastic Entebbe military operation. But there were voices who brazenly denied this was an act of Hashem, and the Rebbe made it his business to prove the fallacy of this ludicrous claim in a most original way.

Approximately two years after this saga, which was widely reported in the Jewish press, a frum college professor named Yitzchak (Irving) Gersh wrote to the Rebbe, wondering if it would perhaps be appropriate to establish a Yom Tov in commemoration of this event.

“I have been a college instructor in Hebrew studies for many years and have encountered many skeptical students who expressed doubts of the Almighty performing miracles on behalf of the Jewish people. When I referred them to the miracles recorded in the Bible, the response frequently was that they doubt their historicity and actuality. However, since the Entebbe rescue many of my skeptical students have come to recognize the miraculous feats of the Almighty,” he wrote.

“I think the miracle of Entebbe can be very helpful to Lubavitch in its great work in bringing back Jews to faith and fear of Heaven. I also feel that it is wrong to allow the great deeds of the Almighty to be forgotten so quickly. I am therefore asking the Revered Rebbe about the appropriateness of finding a way to commemorate the Entebbe rescue day,” he continued in a letter dated June 28th, 1978.

The Rebbe responded with a detailed answer in English, explaining why no national commemoration was established, despite the requirement to recognize and thank Hashem for the great miracles which took place.

The letter was published for the first time in this week’s Beis Moshiach magazine, along with an fascinating overview of the Rebbe’s approach to the entire operation and its aftermath.