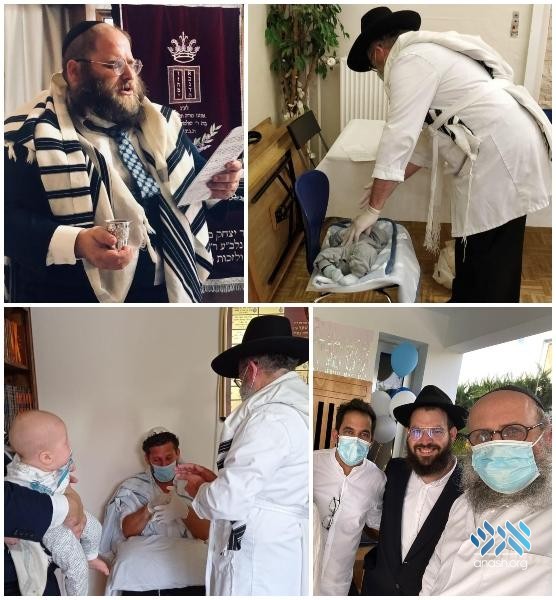 What Rabbi Yossi Simon thought would be a quick trip to Cyprus to perform a single Bris Milah, turned into a whirlwind four-day trip, to four countries, performing four Bris Milahs.

After a busy month of Tishrei, we thought we would have some time to get reorganized at Chabad Golders Green.

Rabbi Yossi Simon gets a call from a family in Larnica, Cyprus, “can you come and do a bris?” A few days later, Rabbi Yair Baitz called from Limassol, Cyprus, “another family has had a boy. When you come, can you do this bris, too?”

What we thought would be 2 Brissim ended up as 4 days. 4 Countries. 4 Bris Milahs.

That certainly hadn’t been the plan when Rabbi Simon boarded the plane to South Cyprus on Monday morning.

Immediately upon arriving in South Cyprus, Bris Milah number one was performed in Larnica.

Within a few hours, he hit the road to Limasol, over an hour away, to do a Bris for baby number two.

The trip was supposed to end there, with the return flight scheduled for Tuesday. 2 Brissim and home in 2 days. But life is not so simple.

A local couple had given birth to a baby boy six months ago but due to the Israeli Covid lockdown, they have been unable to arrange the Bris Milah for their son. Rabbi Azimov asked if Rabbi Simon would come. Of course he said yes.

(Fun fact South Cyprus and North Cyprus were at war with each other until 1974 and it is still not easy to travel from one to the other).

As he arrived at the government quarantine hotel, his phone rang!

It was Rabbi Yitzi Loewnthal from Denmark to say that an Israeli family had given birth to a baby boy last week and would Rabbi Simon be able to get to Copenhagen, Denmark to perform the Bris on Thursday.

Arriving back in London, Rabbi Simon went shopping for kosher food for the family in Denmark, whom he had actually done a Bris for three years earlier and left back to the airport. Rabbi Simon arrived a few hours later to meet the family who traveled in from a town called Aarhus, three hours away, and performed Bris number four.

So summary of the week:

You will be pleased to know that according to the authorities in London, North Cyprus, South Cyprus and Denmark, Rabbi Simon does not have Covid-19! More importantly, four Jewish children have been entered into the covenant of Abraham.