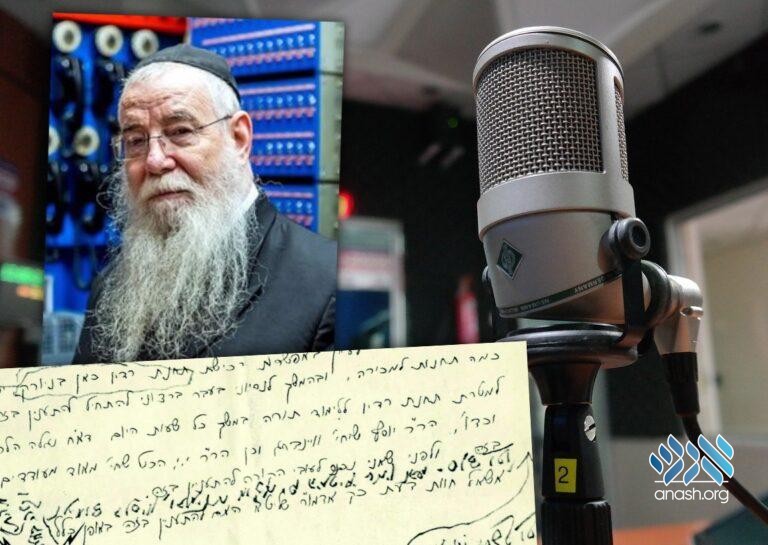 Rabbi Chaim Baruch Halberstam, director of ‘WLCC’ asked the Rebbe about purchasing a local New York radio station to broadcasts shiurim. How did the Rebbe react?

In 5743, Rabbi Chaim Baruch Halberstam, director of ‘WLCC’ – the broadcasting network tasked with transmitting the Rebbe’s farbrengens in real-time to tens of thousands of Chassidim worldwide – considered purchasing a local New York radio station for the broadcasts.

In a letter first published this week by Lahak, bearing the date 25 Nissan “the Hilula of my ancestor, the Divrei Chaim of Sanz,” Rabbi Halberstam wrote to the Rebbe:

“For several years now, I’ve been dealing with recordings and broadcasts in all kinds of ways, radio etc., here at 770 and elsewhere.

“I would like to look into the possibility of buying a radio station in New York. Following my experience, I would consider using it for Torah classes at all hours of the day, Chassidus, Nigleh, Halacha and so on. But before I take an active interest in it, I would like to ask the Rebbe Shlita his view whether I should look into it.”

The Rebbe circled the words “radio station here in New York” and then wrote:

“Ultimately, it pulls a person into broadcasting things that are prohibited (sometimes -biblically), and it is very difficult to withstand the test, and one, therefore, finds heteirim that have no basis, etc.

“Why should you put yourself into this great test which has only questionable gain etc.?”

The Rebbe also circled the opening line in the letter, in which Rabbi Halberstam noted the date being the Yahrzeit of his grandfather the Divrei Chaim of Sanz, and wrote “Specifically?”

The Rebbe seems to be expressing his wonderment how is it that precisely on the day of his grandfather’s yahrtzeit did he find it appropriate to raise such a proposal that could lead to problems.