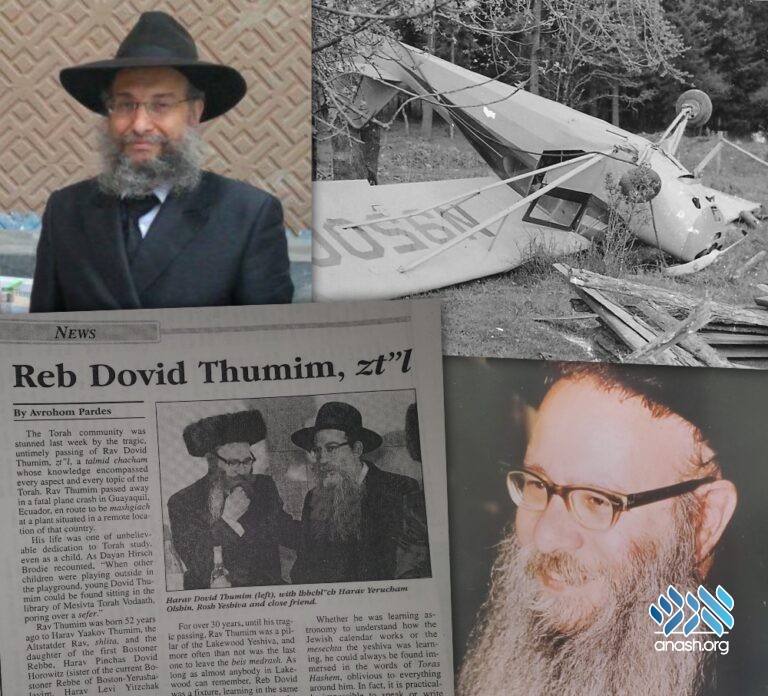 The family of Rabbi Dovid Thumim who was killed in a plane crash while overseeing Kashrus operations in Ecuador, writes about the help they received from Shliach Rabbi Shneur Zalman Blumenfeld a”h, during their time of grief.

Thumim family pens a letter of tribute to the Blumenfeld family

Our father, Rav Dovid Ben Rav Yaakov a”h, was traveling as a mashgiach kashrus in Ecuador when the small craft taking him to the remote factory site crashed.

The shock and trauma we had upon receiving the news were overwhelming. We could only imagine the harrowing ordeal that must have been his final moments.

The immediate and significant concerns of how to access his body and ensure kavod hames in these remote circumstances were daunting. In addition to the distance to where the accident took place, the differing laws, customs, and intra-country diplomacy issues all made the process even more difficult and complicated. Last, but certainly not least, was the fact that Ecuador required autopsy by law before releasing a body in these circumstances.

We had no one to turn to. To say that we were at a loss is an understatement.

What we didn’t know was that there was a Malach Hashem living in Peru, who immediately upon hearing the news, began working miracles for our father.

Rav Shneur Zalman Blumenfled a”h of Peru, took leave of his family with only an empty bag in hand. Well aware of the local laws and the web of bureaucracy he would need to cut through to release the body for kevurah, he jumped right into action, asking his family to say Tehillim for the success of his mission.

The crash site was completely closed off, but Rav Shneur Zalman pulled every string, every connection, and every avenue he had to obtain access.

Baruch Hashem, he was successful and arrived as the scene was unfolding. He was able to identify the body, collect our father’s personal belongings, paying special attention to ensure he had his tefillin.

Rav Shneur Zalman did not stop at that. He worked intensively with the authorities to obtain a release for the body, personally signing the death certificate, recruited local bachurim to help him so that only yidden would handle the body and ensure that proper respect and minhagim would be kept. His ability to charm those he came in contact with, induced the airline and airport authorities to allow them to load the coffin directly into the aircraft hold so that kavod hames could be ensured.

At the last minute, upon realizing that the coffin would travel alone, with no other yidden on board to New York, and then be handled by non-Jews upon arrival), Rav Shneur Zalman bought a ticket and took the long trip back to the US without a proper goodbye to his own family and after a day of intensive work.

His selfless decision to fly and the relationships he employed ensured that our father was not alone. He was allowed off the flight first and personally handled the coffin, until handing it over to the Chevra Kadisha in New York.

Rav Shneur Zalman did not know us, our father, or have any connection to our community at all. He was outstandingly a yid that would not let another suffer if he could alleviate that pain.

He was a dedicated shliach that did not think of personal considerations or costs when rushing to do a complicated, difficult, lengthy chesed shel emes. He did not seek shortcuts or pass on responsibilities. He was fully, totally dedicated to the needs of another yid.

As he was accompanied to the airport he was questioned about the kosher meal he had requested. He had been provided with food for the long return flight. At that very moment, he had noticed that one of the Peruvian flight attendants was of Jewish descent. “I will offer her the kosher meal and perhaps this will facilitate her return to her people,” was his response.

Rav Shneur Zalman was in his early 30s, young in years, yet wise in ahavas yisroel.

Unbelievably, despite his many responsibilities and work in his own kehilla, and all the other yidden he met and helped in myriad ways, Rav Shneur Zalman stayed in touch to give us continued chizzuk over the years.

We are saddened by the loss of such an Ish Kodosh as Rav Shneur Zalman. The continuing efforts of his wife & family on behalf of the South American Jewish community will surely bring great kovod shamayim and kavod for the neshama of Rav Shneur Zalman Blumenfeld.

A charidy campaign has been established to help the family continue his holy work and legacy.