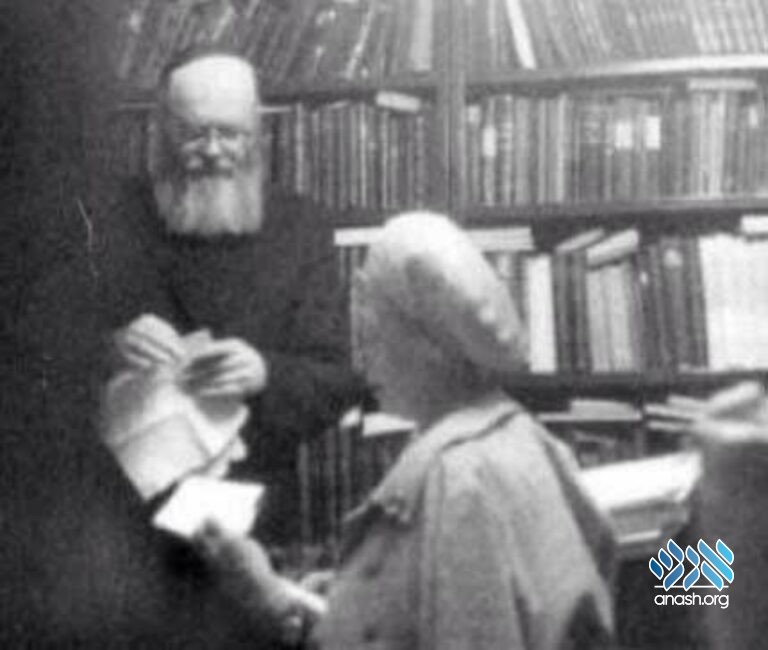 Before Yom Kippur of 5748, the Rebbetzin made a seemingly unexceptional comment, which, when looking back, actually foretold her passing later that year. An incredible story about the Rebbetzin’s exalted and holy character, written by Alaska Shliach Rabbi Yosef Greenberg.

After the Rebbetzin’s passing, we merited to hear from the Rebbe — and from the chassidim who merited to be acquainted with the Rebbetzin — about the Rebbetzin’s unique and exalted character; head and shoulders above us all. We heard about her intelligence, holiness, wisdom, wit, humility, modesty and incredible middos. Her self-sacrifice for the Rebbe, for chassidus and for chassidim, the way she cared for shluchim and chassidim like a mother; the brachos she gave and miracles she performed, etc.

In the sichos following the Rebbetzin’s passing, the Rebbe expressed many times that in addition to her personal greatness, she has a unique connection to her father the Rebbe Rayatz. Chazal tell us that “when a man bears seed first, a daughter is born,” meaning that a daughter has the father’s strength more than a son does. This is especially true of the Rebbetzin’s father, the Rebbe the Nosi Hador.

The Rebbe added that her family name ‘Schneerson’ expresses that the Rebbetzin’s connection with the Alter Rebbe, is in the way of a “son,” and Chazal tell us that a father bequests his son with five things as soon as the son is born: beauty, strength, wealth, wisdom etc., and the Rebbe concluded “to the extent that the son inherits everything.”
(It is interesting to note, the Rebbe Rayatz makes reference to this special connection between a father and daughter regarding the Alter Rebbe and his daughter, Rebbetzin Devorah Leah and her son the Tzemach Tzedek).

R’ Zalman Gurary had a very close connection with the household of the Rebbeim, to the extent that he was raised in the Rebbe Rayatz’s home as a young orphan. He used to describe the Rebbetzin as having inherited the ‘intellect’ of the Frierdiker Rebbe, and that she had the wherewithal to be a ‘Rebbe’ in her own right.

One year ago, Vaad Or Vechom hosted a Zoom farbrengen, and Rabbi Yehuda Clapman related a story about the Rebbetzin that illustrates the Rebbetzin’s greatness and the the Rebbe’s words about her.

As soon as he mentioned the Rebbetzin, the Rebbetzin immediately interrupted him and said, “Now is the time to speak in general terms, not in specific terms.” The Rebbetzin went on to say that this was the time to give a bracha that everyone should be healthy, have ample parnasa, Yiddishe and chassidishe nachas from their children; now was not the time to mention specific names.

Incredibly, something very similar happened to her father the Rebbe Rayatz on the final Erev Rosh Hashanah before the histalkus..

With this note the Rebbe implies that the Rebbe Rayatz’s words hinted to the histalkus. The very same occurred with the Rebbetzin, who said similar words on the final Erev Yom Kippur of her life in this world, that ‘today on Erev Yom Kippur is a time to speak about general matters, not specific matters’, now was not a time for personal brachos. In saying this, the Rebbetzin alluded to her passing.

Before Pesach 5710, the chozer R’ Yoel Kahn asked the Rebbe whether he should observe Pesach for one day, because he intended to possibly return to Eretz Yisroel, since the Rebbe Rayatz had passed away. The Rebbe told him, “The Rebbe [Rayatz] knew everything, and if he told you to come from Eretz Yisroel to 770, he certainly knew that there would be the histalkus, and he did not intend that you come here for two weeks.” The Rebbetzin, too, like her father the Rebbe Rayatz, knew in advance of her passing.

The Rebbe Rayatz speaks of the mesiras nefesh that Rebbetzin Devorah Leah had in giving up her life for chassidus, for chassidim, and for the Alter Rebbe.

The Rebbe added that each and every one of us must show that “her children are alive” — which means that “she is alive” — by learning from the way she acted and to follow in her ways of mesiras nefesh.

The Rebbe concluded that those who follow in the Rebbetzin’s ways merit brachos in all things, physically and spiritually; such brachos that each bracha brings another in its wake.

May we merit very soon the fulfillment of the prophecy that “Those who lay…shall awaken and rejoice,” and we will merit to celebrate the Yom Hilulah together with the Rebbe and Rebbetzin joyfully, with the coming of Moshiach.