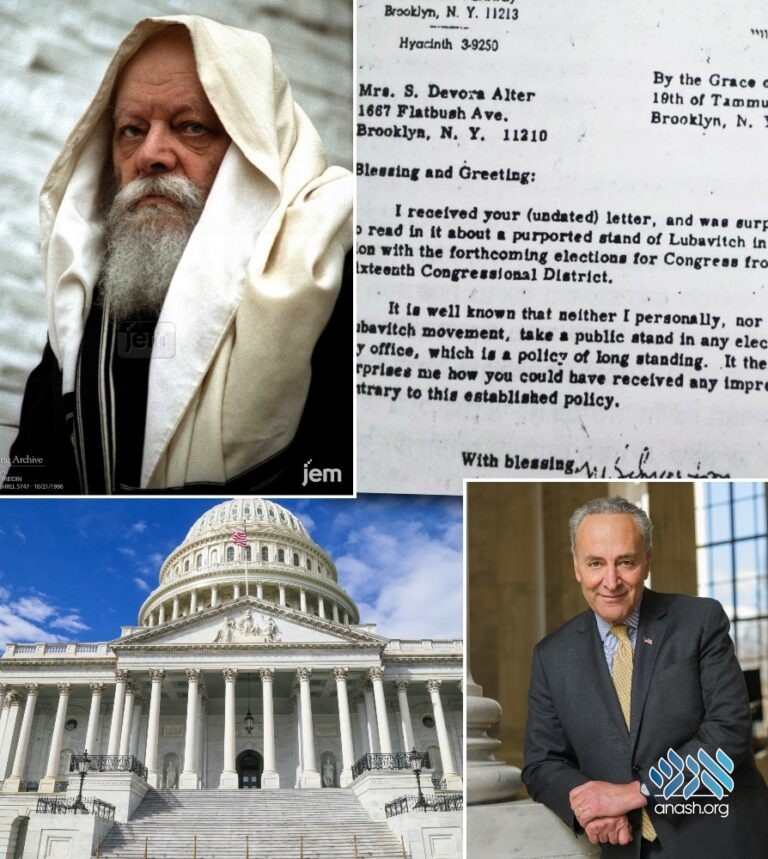 In 1980, Susan Alter, a frum woman from Boro Park ran for Congress against Mr. Chuck Schumer. Quoting the “stand of Lubavitch,” she wrote to the Rebbe for support, who took his consistent position.

Susan Alter was the first and only frum woman to serve on the New York City Council, where she served from 1978 to 1993. In 1980, she ran against Mr. Chuck Schumer for a position in Congress from the Sixteenth Congressional District.

A newspaper clipping from that time reports:

“Mr. Schumer, a 29-year-old, five-year veteran of the state Assembly, started running for office the morning after he graduated from Harvard Law School. Mayor Koch and Miss Holtzman have endorsed him.

“Susan Alter, a City Council member since 1978, who is in an unusual position as a woman representing an Orthodox Jewish community (in Borough Park), is financing half of her $100,000 campaign from the insurance she collected when her husband died.”

During that time, Mrs. Alter reached out to the Rebbe regarding a “stand of Lubavitch” she had received about the elections. It is unclear whether those rumors where in support of herself or of Mr. Schumer.

Regardless, the Rebbe took his consistent stand of keeping Lubavitch above politics.

The Rebbe responded with a letter, one that bears keeping in mind as the election season riles up Jewish communities in New York and across the country.

I received your (undated) letter, and was surprised to read in it about a purported stand of Lubavitch in connection with the forthcoming elections for Congress from the Sixteenth Congressional District.

It is well known that neither I personally, nor the Lubavitch movement, take a public stand In any election to any office, which is a policy of long standing. It therefore surprises me how you could have received any impression contrary to this established policy.