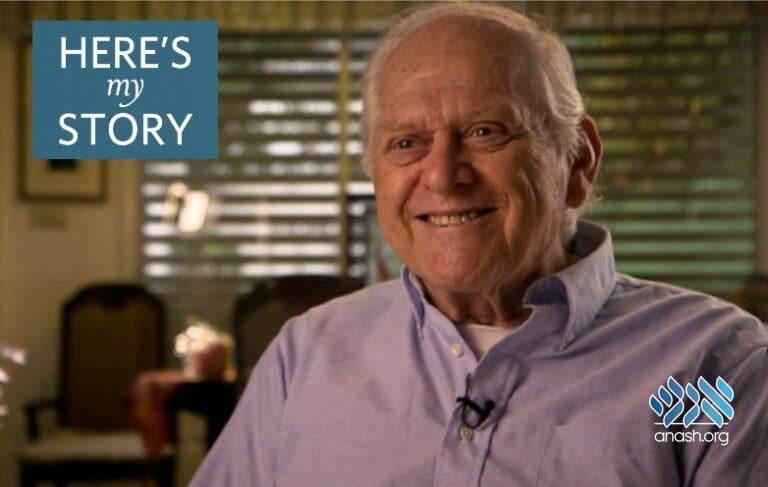 As a senior officer in the Mossad, Mr. Eitan Lev always kept true his identity a secret. He was shocked when the Rebbe suddenly called for him at a farbrengen.

Mr. Eitan Lev served in the Mossad for many years. In the 1960s and 1970s, he filled confidential positions in North America and South America. He was interviewed in his home in Tel Aviv, in December of 2013.

For close to twenty years, during the 1960s and 1970s, I was stationed in New York, serving in a senior position with the Mossad, Israel’s intelligence agency.

During one of these years — I believe that it was in the end of 1967 — a few of my colleagues at the Israeli consulate in New York invited me to join them on an excursion to Brooklyn. They explained that they were going to visit the Lubavitcher Rebbe’s synagogue to participate in the celebration of Simchat Torah there.

“Who? What? What is this about?” I asked, but they assured me that it would be a very nice, festive event. “Can I bring my wife?” I asked, and to my delight they said that she could join. I was so totally unprepared for where we were going and what was going to happen.

When we got to Chabad Headquarters, we saw a big commotion. It turned out that the hakafot — the dancing with the Torah — had not yet begun, but a farbrengen with the Rebbe was taking place, and it seemed that the place was too small to accommodate the thousands of chasidim who had shown up. However, our visit had been arranged in advance, and seats had been saved for us inside.

We were led into the big hall where the excitement was palpable — the crowd was singing with great joy, and the Rebbe was beating out the rhythm on his table.

Suddenly a chasid approached me, saying, “The Rebbe would like to speak with you.”

I was very surprised. The Rebbe? Speak to me? How does the Rebbe even know who I am?

“There must be a mistake,” I said. But he insisted that the Rebbe wanted to converse with me.

I turned to my colleagues and asked if anyone had informed the Rebbe’s secretariat that I would be coming. Of course, due to my position, I always made sure to keep a low profile. No one was supposed to know my identity nor my location. But they all shrugged their shoulders, as if to say, “We didn’t say a thing. We have no idea what this is about.”

I was led to the platform where the Rebbe was sitting. “It is nice to see you here,” he greeted me, speaking Yiddish. Beyond the surprise of being summoned to the Rebbe, I was shocked that he was talking to me in Yiddish.

“How do you know that I speak Yiddish?” I asked the Rebbe.

I realize that it was audacious of me to interrogate him like that, but he just smiled and began to shower me with blessings that I should succeed in the work that I was doing, that I be healthy and have a good livelihood. “Be careful and take care of yourself. Your job is very important for the Jewish people,” he said. As a member of the Mossad, I suddenly felt very exposed. I was bewildered and didn’t understand what was going on. I was not used to being surprised — usually the only surprises that I experienced were the ones that I had orchestrated myself. So I was convinced that my colleagues had told the Rebbe about me. They must be lying to me, I thought. After all, they are trained experts at hiding the truth! I resolved to take care of them later.

Of course, my wonderment only grew. It started to feel like someone was mocking me. Maybe the connection between the consulate and the Rebbe ran so deep that they worked together to play a prank on me. I simply didn’t know what to think.

Another question that the Rebbe asked me was, “How do you feel as a Jew?” I assume that he was asking me this because I didn’t look Jewish, which was one of the reasons that I was able to work in intelligence. But I felt Jewish in every fiber of my being, and I told the Rebbe so.

He then asked me how it felt to travel the world as a Jew.

I answered that, while stationed in the United States, I made sure to send my children to a Jewish school. As far as keeping kosher, I have been careful in this regard my whole life, and when my work put me in a challenging situation, I avoided non-kosher foods by claiming to be vegan.

I don’t know exactly how long this conversation with the Rebbe continued, but I am certain that it seemed longer to me than it actually was. I felt that I was standing there for at least a half hour, but it must have been much less, probably just a few minutes. At a certain point, sensing that the whole crowd was waiting for me to finish, I started to feel uncomfortable. So I tried to wrap up the conversation by saying, “We have been speaking for a long time and everyone is waiting…”

I know this was another audacious statement on my part — who was I to be telling the Rebbe what to do — but he was in no rush to finish talking.

At the end, the Rebbe gave me a piece of cake and then blessed me again that I should succeed in everything I do and that I should be healthy and strong. This blessing held special meaning for me because I had gotten injured a few times during my service.

As I made my way back to my seat, everyone along the way asked me for a small piece of the Rebbe’s cake, so that by the end, I had barely a few crumbs left.

When I reached my colleagues I demanded, “Guys, what’s going on here?” But they seemed just as puzzled as I was.

I continued to interrogate them the next day until they finally convinced me that none of them had spoken to the Rebbe or his secretariat about me. So I still do not understand how the Rebbe knew that I spoke Yiddish, or how he knew what I was doing. And my sense was that he knew even more than he revealed.

All this was very strange for me. Was I so transparent? That would pose a serious problem. But, if I really was so transparent, why couldn’t everyone see it? Why only he?

These questions were on my mind for a long time and I didn’t find any answers until I met a Chabad chasid who explained it to me in three words: “That’s the Rebbe.”

The fact that until today, more than fifty years later, this event is still engraved in my memory is testimony to how impressed I was by the experience. I left feeling that I met a brilliant man, with vast knowledge and understanding, and exceptional analytical thinking power. I also learned from the Rebbe how to listen. When he asked me something and I answered, he was silent, letting me speak while he listened attentively.

He was an outstanding person, one in a generation. There is a lot to learn from him, and I feel too small to truly understand this great man. I was fortunate to meet a true leader, and I thank G-d for that.