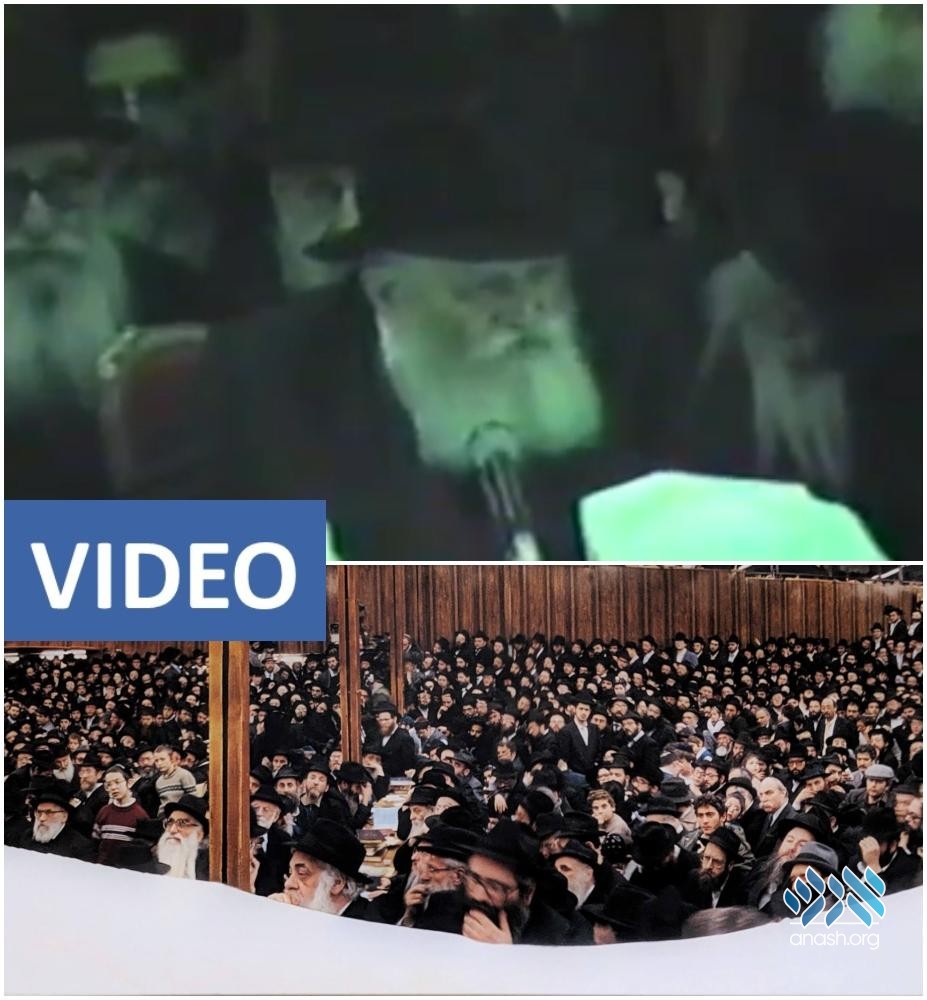 Watch: On Zayin Cheshvan 5746, the Rebbe spoke about the pandemic that took place in the time of Dovid Hamemlech, the reason it had stopped, and the lesson for us today, in a time where “unexplainable events are happening.”

On Zayin Cheshvan 5746, 35 years ago to the day, the Rebbe spoke about the pandemic that took place in the time of Dovid Hamemlech, the reason it had stopped, and the lesson for us today, in a time where “unexplainable events are happening.”

In Shmuel II, the Novi relates how there was a plague in the days of David Hamelech, and how the plague stopped. The Radak explains that the plague happened because the Yidden did not demand the Beis Hamikdosh.

The Rebbe quoted the Radak, and added that in recent times there have been events about which there is no natural explanation. “What I can do,” said the Rebbe, “is to publish the words of the Gedolei Yisroel about the need to wait and demand Moshaich.”

The Sicha starts at 2:28:34.
An English translation of the Sicha follows below.

Courtesy of Sichos In English.

3. The Chida (Rabbi Chaim Yosef David Azulai), was a posek (halachic authority), and Kabbalist, who is often quoted by later scholars in matters of Halachah as well as the esoteric teachings of Torah. In his 18th century encyclopedic work, “Midbar Kdeimos,” under the entry “Kevui — hope,” the Chida writes:

In Yalkut Shimoni on chapter 40 of Tehillim we find: Even if the Jewish people only have the merit of hoping [for the redemption] and striving after the L‑rd, they are worthy of being redeemed. And if you should say, “There were times in the past when we hoped and expected the redemption to come and we were not saved,” (see Yirmeyahu 8:20 and commentaries loc. cit.) “Hope in the L‑rd, be strong and let your heart be valiant, and hope in the L‑rd.” (Tehillim 27:14) This means that although you have hoped and have striven after G‑d, but your supplications were not heard, still you must hope, again and again.

Based on this commentary of the Yalkut, our great teacher, Rabbi Yosef David, in his wonderful book “Tzemach David,” writes the following explanation on the text of the blessing in the Amidah: “Speedily cause the scion of David Your servant to flourish, and increase his power by Your salvation, for we hope for Your salvation all day”: It appears to be quite puzzling. Why is ourhope a reason for bringing Mashiach? If we are worthy, the redemption will come without our hopes, and if we are not worthy, why will our hoping help?!

But the explanation is:

We must pray to G‑d: “Please bring the scion of David, and if you will say that we are truly not meritorious and we are not worthy, nevertheless bring the redemption, because we hope for Your salvation all day.” If we have the merit of such longing and striving, in that merit alone we are worthy of being redeemed!

We find a related commentary in the writings of Radak (Rabbi Dovid Kimchi — 12th century) whose authoritative commentary on Tanach has been accepted and included in many editions of Mikraos Gedolos including the very first edition.

In the Book of Samuel II, the last chapter tells of the census which King Dovid ordered and the sin which was thereby incurred. As a result, many thousands of Jews died in a sudden plague. King David repented, and G‑d accepted his remorse and led him to purchase the barn and threshing floor of Aravnah the Jebusite, where he built a Mizbeach (altar), and where the Holy Temple would eventually be built. After Dovid offered sacrifices on the Mizbeach, Scripture tell us:

.. G‑d accepted the prayer of the people of the land and the plague ceased from the Jewish people. (II Shmuel 24:25)

Rabbi Dovid Kimchi in his authoritative commentary on this verse comments:

There is a homiletic interpretation [in the name of Rabbi Shimon bar Yochai], that so many thousands of Jews died in the days of Dovid only because they did not pray for and demand that the Bais HaMikdash (Holy Temple) should be built in their time. From here we derive an important lesson, a minori ad majus: These people never had the Bais HaMikdash, nor was it destroyed in their time, yet, they perished because they did not strive for it, how much more so, we, who had the Bais HaMikdash and saw it destroyed in our times, must truly pray, hope and demand that it be rebuilt.

For this reason the Elders and the prophets made the rule that we must train ourselves to pray three times every day: “Return Your Shechinah (glory) and Your Kingdom to Zion and the Order of Your Divine Service to Jerusalem,” Amen, so may it be Thy will, Selah!

With these words the Radak concludes his commentary on the book of Samuel II.

What action do I seek? From the questions and arguments that I hear concerning our sincere hopes and demands for the true and complete redemption through our righteous Mashiach, it seems clear that there are many who are unfamiliar with these aforementioned teachings.

It is therefore appropriate that these vital words be printed and publicized in the media. May I stress that it should not be published in my name. There are those who find opposing opinions whenever something is said in the name of certain individuals. But more to the point, in matters of redemption we have the classic rule of our sages:

Whoever says a thing in the name of its author brings redemption to the world. (Avos 6:6)

For this reason it is appropriate to propagate these words in the names of the Radak and Chida. Let the words be quoted verbatim and the sources be cited. Hence, even our fellow Jews who may not possess these books will be able to study their words.

Another point on the same subject: I have recently received a troubled and frightened letter from a woman. She wrote that she received a “chain letter” which demanded that she should make ten copies of the letter and send them to ten people. The letter went on to say that if the recipient of the letter would do as told she would receive great blessing and if not “terrible things” would happen to her, and those who did not follow these instructions in the past “suffered terribly.” The letter was not signed and it was full of foolishness and ridiculous words.

The recipient of this “chain letter” did not know who had sent it, nor how her address had been found, but she still asked me what to do in the face of such a “threat.”

Understandably, I answered her to destroy the letter and I added:

Even when referring to the “signs of the heavens” a Jew has nothing to fear.

Later I thought to myself; I don’t know this woman who wrote to me nor does she know me, she just heard my name and came to seek advice. Now why would such a case come to my attention? I realized that I had to utilize this phenomenon for an aspect of holiness.

We find an example of this in the case of gold. The Midrash says:

The world was really unworthy to have the advantage of gold, but it was created for the sake of the Tabernacle and the Temple. (Shmos Rabbah 35:1)

This was true despite the fact that for 26 generations gold was used for idolatry! When the Temple was built the true reason for gold’s creation was realized.

Seeing that there is a practice of sending out “chain letters,” we must use this phenomenon to propagate a good thing among our Jewish brethren. In our case: To spread the words of hope and striving for Mashiach. This can be effected by sending such letters to ten Jews with the suggestion that they each send copies to ten other Jews, and so on.

Now, if there are those who see themselves as “Shpitz Chabadniks” (elite Lubavitchers) and want to stop all their activities and send out hundreds of such letters let them know that all I ask is to send ten letters and nomore! If they have spare time let them study Torah.

Of course there should be no threats in the letters, only blessings! Where do you draw the potential to bless Jews? Simple. Every Jew is a son of Avraham, Yitzchok and Yaakov; a daughter of Sarah, Rivkah, Rochel and Leah upon whom the promise of G‑d applies: “I will bless those who bless you.” (Bereishis 12:3) Thus when you bless others you will also be blessed.

The letters should be written in a pleasant and friendly manner citing the sources of our great sages about the great importance of praying and demanding of G‑d to speed our redemption. In this vein and spirit you make the request of the recipient, to copy the letter and send it to ten other Jews and ask them to do the same. The letter should conclude with a prayer that they be blessed with all the blessings of the Written and Oral Torah which will come through this action of bringing the redemption closer. This activity should also bring an increase in Torah, brotherly love and Jewish unity.

For those who wonder: What happened that these old ideas are suddenly being projected? The answer is that by Divine Providence these ideas have come to my attention now.

It may be added that recently some actions and occurrences have come to light which are surprising and strange. No one would have thought that certain people would do certain good things, or the opposite. To me these are signs of Mashiach.

When actions and ideas are clarified so that all can see the good in them, this is a sign of Mashiach’s times, as we find in Daniel

They will be selected and clarified and many will be refined. (Daniel 12:10)

When the Holy One, Blessed be He, saw that our “sleep is pleasant and sweet” it was obvious that we needed a new “sign.” So G‑d revealed the good of some and the evil of others, in cases where we would never have imagined it.

We must do what we can, to inform as many Jews as possible of the writings of our sages, including the Rambam who writes:

In that era … Israelites will be very wise, they will know the things that are now concealed and will attain an understanding of their Creator to the utmost capacity of the human mind as it is written: “For the earth shall be full of the knowledge of the L‑rd as the waters cover the sea.” (Laws of Kings 12:5)

This will come about at the time prior to Mashiach, through the spreading of the wellsprings of Torah to the outside.

And through our actions and our Divine service in all these aspects, the Halachah of the Rambam will surely be fulfilled that:

The tenth red heifer will be made by the King Mashiach, may he speedily redeem us. Amen, so may it be Thy will.

By studying these matters and praying for Mashiach with all your heart and soul G‑d will bring Mashiach speedily. Amen so may it be.