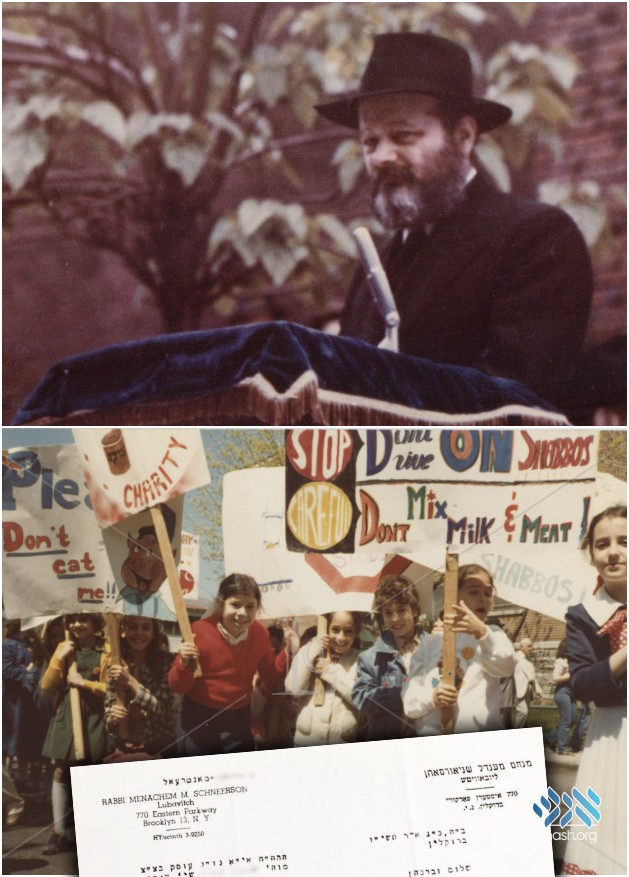 In a newly revealed letter, the Rebbe gives an incredible bracha to a couple who was active in the Lag B’omer Parade: healthy children of their own.

The Lag B’omer Parade of 5717-1957 was special. For the first time, a large, regal platform was installed in front of 770 from which the Rebbe addressed the children and watched the parade march by. It was the first Lag B’omer parade that took place in its current format.

Great significance was attributed by the Rebbe to the Lag B’omer Parades. At numerous farbrengens the Rebbe spoke about their value, and he personally participated in the central parade at 770, standing in the blazing sun for hours — all while fasting in preparation for his visit the Ohel.

A recently discovered letter reveals another dimension to the parades: the spiritual powers for those involved in the activities.

In that same year that the first major parade was held in New York, a parade was held in Montreal as well. One of the organizers, apparently, had yet to be blessed with children, and a letter, the Rebbe affirms that the merit of his participation in the activities would draw down Hashem’s blessing for his deepest desire.

The following is the full text of the Rebbe’s letter:

“I was pleased to be notified by telephone regarding the parade on Lag B’omer, Rashbi’s Yom Hilula, and I have also just received your letter of good news about the above. The merit for all those involved cannot be overstated. Hashem repays measure for measure, but immeasurably more—with healthy and viable children from whom you will receive an abundance of true nachas, that is, chassidishe nachas.

“No doubt, you have retained the addresses of the students who participated in the parade; it would be good to reach out to them in an appropriate manner and bring up, to them and their parents, the subject of their education for the upcoming school year, and about furthering matters of Torah and Mitzvos in general. You will no doubt deliberate the matter amongst yourselves; as it has been said [Mishlei 11:14], ‘the advice of many brings salvation.’

“With blessings for good news in all the above and, very soon, in the fulfillment of your and your wife’s hearts’ desire, for good.”