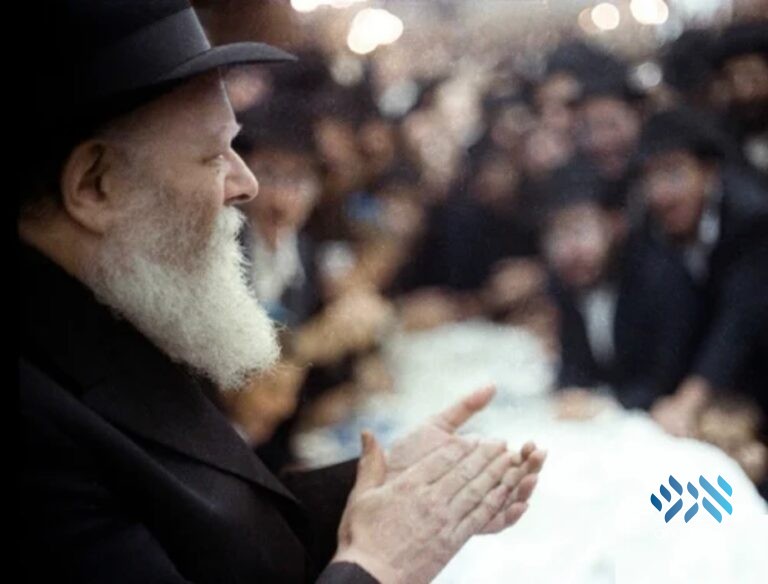 Motzei Shabbos Story: A young woman recently separated from her husband, came to 770 to receive lekach from the Rebbe, but then the Rebbe asked her a surprising question that ended up changing her life.

A young woman from Miami Beach, Florida, recently separated from her husband, was on line to receive the traditional lekach (honey cake) from the Rebbe.

At the onset of the Jewish new year, the Rebbe would distribute lekach twice, while wishing each recipient with a sweet new year: once on the eve of Yom Kippur, and once on the last day of the holiday of Sukkot, known as Hoshannah Rabbah. This story took place on Hoshannah Rabbah, which is also the day that precedes the holiday of Simchat Torah, one of the most joyous holidays on the Jewish calendar.

Her turn finally arrived. As she stretched out her hand to receive the cake, the Rebbe asked her if her husband, Louis, was also in New York. She responded that to the best of her knowledge he was not.

Louis had sadly become a drunk and had drifted away from family life.

“Alti Bukiet is a close friend of his, and he might know how to reach him,” she said, referring to my brother Alti, who was then one of the older students learning at the Lubavitch school in Miami. (Today he is the shliach in Lexington, Massachusetts.)

The Rebbe turned to one of his aides and asked if he could find Alti Bukiet. The aide ran downstairs to the study hall at Lubavitch World Headquarters, searching for Alti. He found him and explained that the Rebbe wanted him immediately.

Alti dashed to where the Rebbe was distributing the cake, and the Rebbe asked whether he knew how to contact Louis.

“I would like for Louis to attend tonight’s hakafot,” the Rebbe said.

Alti immediately contacted Louis and asked that he take the next flight out to New York. Louis responded that he had no interest in attending, and would definitely not make the trip to New York. Alti pleaded with him, explaining that the Rebbe had personally invited him to attend. After an hour of discussion Louis consented.

He arrived in Brooklyn minutes before the holiday.

That night and on the following night, Louis immensely enjoyed the dancing and singing. The Rebbe made eye contact with Louis and smiled at him numerous times, nodding his head, acknowledging Louis’s presence amongst the thousands gathered.

After the holiday, as Louis passed by the Rebbe, the Rebbe with a loving smile said, “I was happy to see you in good spirits during the holiday. Try to work out your problems and do not be foolish about it…”

Shortly thereafter Louis sobered up and reunited with his family.