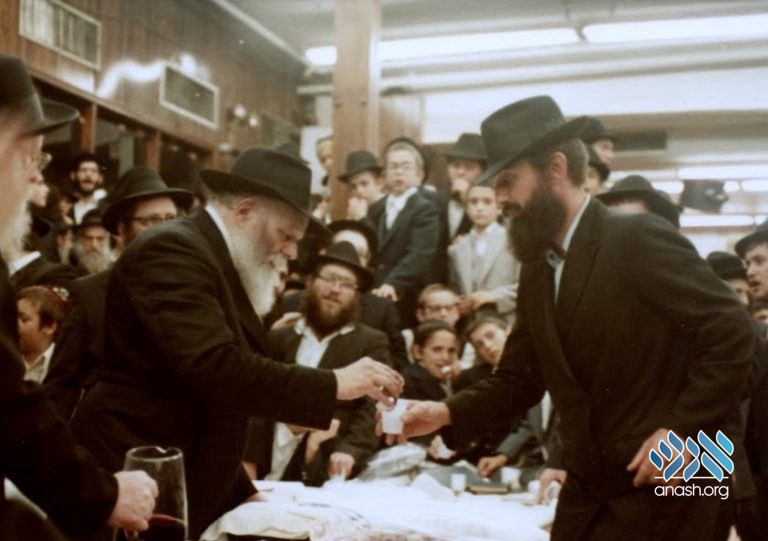 During Tishrei 5732, many newly immigrated Russian Jews finally have a chance to spend time in the Rebbe’s presence. Throughout the special month, the Rebbe showed special attention to the Russian chassidim present at Farbrengens and Kos Shel Bracha.

On Motzei Simchas Torah, while the Rebbe distributed Kos Shel Bracha for hours, Reb Berel Zaltzman sang many Russian melodies, and the Rebbe requested that he teach one of the lesser known tunes to all the Chassidim in time for Shabbos.

On Thursday night before Shabbos Bereishis, news spread throughout 770 that the Rebbe was going to hold a special Farbrengen on Motzei Shabbos in honor of the departing guests. Rumor had it that there would be another distribution of Kos Shel Bracha as well.

That Shabbos, being Shabbos Mevorchim, the Rebbe held a Farbrengen, and the song the Rebbe requested the Chassidim learn was sung to the Rebbe’s encouragement.

On Motzei Shabbos, as expected, the Rebbe entered the Shul in 770 for another special Farbrengen. The entire event was a lively conclusion to the unique month the Chassidim had merited to spend with the Rebbe, and many Freiliche Nigunim were sung, including the Russian songs sung throughout Tishrei.

Amongst the themes discussed at the Farbrengen was the subject of אל יפטר אדם מחבירו אלא מתוך דבר הלכה, saying a Ma’amar on the subject.

At the Farbrengen’s conclusion, the Rebbe explained the meaning of the Russian words in the Nigun צמאה לך נפשי, and the Nigun was sung. The Rebbe also led the Chassidim in singing (the slower) צמאה. Then the Rebbe led the Bentching, and distributed Kos Shel Bracha to all the assembled guests.

This special end of Tishrei Farbrengen has now been restored by Ashreinu.app from the Goldstein family collection. The quality of this version of the Farbrengen greatly surpasses what was previously available, and this recording includes an additional 40 minutes of content.

Listen to the Farbrengen here.