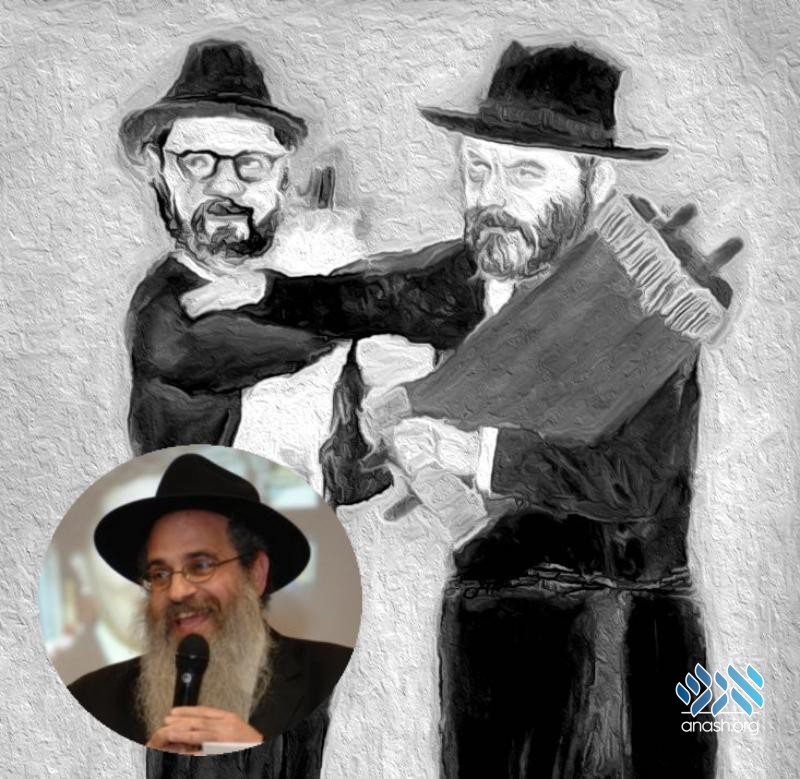 Rabbi Raphael Tennenhaus relates of the time that the Rebbe danced with his father, arm over each others shoulders, for 45 minutes, on Simchas Torah 5712.

On Simchas Torah 5712, (1951), which was the first formal Simchas Torah of the Rebbe’s nesius (leadership) the Rebbe didn’t dance with the Rashag (his brother-in-law) as was his custom in later years, but with older chassidim.

My father was upstairs in 770 on a table along with other chassidim from Montreal, where services and Hakafos were held, when suddenly the table collapsed, and he landed on the floor. As he got up, he felt an arm on his shoulder — it was the Rebbe’s arm. He then put his arm on the Rebbe’s shoulder, and they danced together for 45 minutes to the tune of what later became כמופת הייתי. After 45 minutes my father stopped because he was tired.

I was later told by one of my Melamdim (teachers) that he remembers how my father danced with the Rebbe, but that he wouldn’t have put his arm back on the Rebbe’s shoulder, had the Rebbe put his arm on his shoulder.

Yet my father (originally a Viznitzer Chossid) didn’t hesitate for a second, put his arm on the Rebbe’s shoulder, and was זוכה (merited) to the holy touch of a צדיק , for forty five minutes! We see from the Hayom Yom how special it is when a Tzaddik (See Hayom Yom 14 Teves, regarding the Baal Shem Tov and the Shpole Zayde) places a hand on someone.

When this story was briefly published in the Kfar Chabad Magazine in 1994, the late Rabbi Leib Kramer ז״ל, came over to me and said, “The story of your father dancing with the Rebbe for 45 minutes was not adequately described. There was so much detail, so much simcha, so much intensity, the story must be rewritten.”

For whatever reason, (probably because my father never made a big deal out of it) I never asked my father’s contemporaries for the details of that 45-minute dance. Certainly, one day, the details of the dance will be told.

Either way, there’s no doubt that the Rebbe dancing for 45 minutes with my father Hakofos vividly made an everlasting Chassidishe vibrant, warm, and joyous impact on my father and on anyone he influenced.