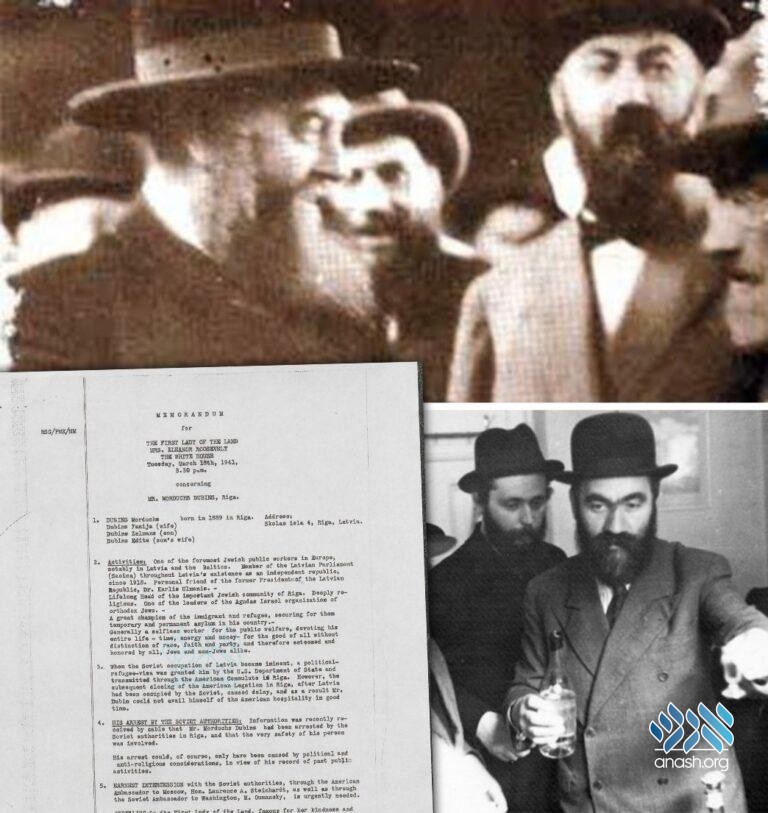 Reb Mordechai Dubin was a most fascinating figure; devoted chossid, successful statesman and powerful diplomat. In honor of his birthday on 28 Teves, Chabad historian Rabbi Nochum Zajac sheds light on the efforts undertaken to free him after his arrest by the Soviets.

The Chossid Reb Mordechai Dubin was a most fascinating figure. Dubin was a statesman, diplomat, and powerbroker in inter-war Latvia, whose influence and impact was felt widely within the Jewish world. At the height of his public career, he walked the corridors of power with a bearing seldom seen in a Jewish lay leader. He was the founder and leader of the traditionalist Agudath Israel political party in Latvia, but represented Jews far beyond his natural base and served as a uniquely inclusive chairman of the Riga Jewish Community.

He commanded — but never demanded — respect, and in life and death he was lauded by both his closest allies and most bitter political opponents for his proactive willingness to help anyone — especially his fellow Jews — at any time and in any place, his assistance always of great efficacy.

Yet the story ended tragically; his wife and daughter-in-law perished in the Riga ghetto, his son in a Nazi camp and he, years later, died destitute and alone in Soviet captivity.

Reb Mordechai Dubin was born on this date the 28th of Teves in 5649/1889 in the city of Riga, Latvia, to Schneur Zalman Ber and Rivkah Rochel Dubin. The family had seven children; four sons and three daughters, Mordechai being the second oldest son. Zalman Ber, a successful timber merchant, was among the first Russian Jews to settle in Latvia and helped found a number of Shuls, Mosdos Chesed, Chadorim, and schools that contributed to the development of Jewish life in Latvia in general and the religious community in Riga in particular.

A Lubavitcher Chossid, he took his son Mordechai at a young age to see and be bentched by the Rebbe Rashab.

At a young age, he married Feiga (Fania) Jacobson, the daughter of Reb Dovber Jacobson, a respected merchant from Jelgava (Mitau) a city in central Latvia about 25 miles southwest of Riga, and went into business.

He was by all accounts active in public affairs throughout this time, however during the refugee crisis caused by World War I, it became his full-time occupation. At that time many pressing Jewish communal issues arose, such as the procurement of matzah. From then on, he became a full blown Askan, working on behalf of the Jewish people in general, and Latvian Jewry in particular. Until 1940 he was the heart and soul of Latvian Jewry.

Dubin was a man who wore many hats in Latvia. He was the Rosh HaKahal of the Jewish community of Riga, the leader of the Agudas Yisrael Party, head of Machane Yisrael, and an executive member of both Keren Ha-Chinuch Be-Latvia, and Tzeirei Agudas Yisrael. This was in addition to the assistance he gave to the streams of people who would line up before him in shul and outside his door each day. He was a selfless worker for the public welfare, devoting his entire life – time, energy and money – for the good of all.

He went on to help the Frierdiker Rebbe on many occasions with various communal matters, including rescuing him once again from Poland and bringing him to Riga at the beginning of World War II.

Dubin went out of his way to help out the Rebbe on various occasions.

If one would want to better acquaint himself with the life and times of Mordechai Dubin, I would suggest reading Rabbi Dovid Margolin piece here, where he presents an English translation of Avraham Godin’s short memoirs of Dubin.

In honor of Rabbi Dubins birthday, I would like to shed a drop of light in regards to a specific event.

When Dubin’s life was in danger (twice), both the Frierdiker Rebbe and the Rebbe left no stone unturned trying to save. I would like to focus on one of the occasions.

After the Soviets occupied the Baltic in June 1940, they deported Dubin and other Lubavitchers, along with tens of thousands of non-Jewish Latvians, from Riga to the Soviet Union, where many of them disappeared.

At that time, Dubin endured terrible hardships. Citizens of the former Latvian Republic sat in agony as the arrests began. The first to go were the former politicians and members of the deposed government. Of course, Dubin feared that he too would fall into this web of arrests, and every morning he would meet at the Shul and discuss it. Dubin understood well that the Soviets had old accounts to settle with him, for in his time it was he who had torn the Frierdiker Rebbe from their grips, and thereafter had often traveled to Russia to work on behalf of its Jews.

Dubin’s only son, Zalman, closely resembled his father, and one morning as he left his house, he was snatched off the street and stuffed into a car. The agents immediately realized they had caught the wrong bird and released him, but it sent a clear message to Dubin as to what he could expect of his former Soviet “friends.” A few days later, this was in Feb. 1941, Jewish Riga shuddered from the frightful news: Mordechai Dubin had been arrested.

Visitors to him at the central prison were prohibited. From time to time the procurator allowed kosher products to be passed on to him, including a small amount of matzah for Pesach. Through other arrestees and those who were later freed we soon learned that Dubin ate nothing but dry bread in prison. Obviously, the packages never reached him.

It seems, that when the Soviet occupation of Latvia became imminent, a political refugee – visa was granted him by the U.S. Department of State and transmitted through the American Consulate in Riga. However, the subsequent closing of the American Legation in Riga, after Latvia had been occupied by the Soviet, caused delay, and as a result, Dubin could not avail himself of the American hospitality in good time. (Though it seems that Dubin delayed leaving Latvia till the last second, as he wanted to stay with his flock).

With Dubin and others in mind, the Rebbe sent a delegation to the White House in March 1941 to obtain emergency visitors’ visas. The Soviet authorities had apparently sent most of those named by the Rebbe to concentration camps. Because they were Soviet citizens and had opposed the communist regime, their rescue would prove difficult, despite the Soviets’ close diplomatic ties with the United States. With the help of Clarence E. Pickett, executive secretary of the American Friends Service Committee in Philadelphia, a meeting was arranged with the First Lady Eleanor Roosevelt, who unlike her husband was a great lover and helper of Jews.

Pickett wrote to Mrs. Roosevelt on 5 March, saying, “Three distinguished rabbis of the bearded sort pled with me to ask you to see them.”

She agreed to a meeting, and on 18 March 1941 Judge Philip Kleinfeld (of the New York Supreme court, and a great friend of Lubavitch who helped out the Frierdiker Rebbe in those years), the Rashag, and Rav Efraim Eliezer Yolles of Philidelphia visited her at the White House.

Although they mentioned many names, their primary focus was Mordechai Dubin, who had done so much to help the Rebbe over the years. They presented her with a two-page memorandum. The first page appealed to the “First Lady of the Land, famous for her kindness and great humanitarian work, to kindly intervene in behalf of a distinguished public worker and humanitarian, Senator Mordechai Dubin, through the above mentioned channels, with a view to securing the early release of. . . Dubin, and his deportation together with his family to this country, where asylum and refuge are awaiting him.”

(2) The family of Reb Shmuel Levitan, namely his wife Sheine Levitan and his sons Gershon, Sholom, and Avraham.

The outbreak of the present war severed him from his family. Information had been received by cable that his family is a very difficult position, that hie son Sholom had been arrested and was in the Vilna prison. He had been arrested with several other divinity students from the “Tomche Tmimim” Yeshivos.

The memorandum concluded by stating, “Intercession is earnestly appealed for in behalf of the above mentioned victims of intolerance with the view of procuring their release and deportation from the Soviet Union to this country, where hospitality and refuge has been offered to them.”

It is not clear how far meeting managed to accomplish.

What we do know is, that Mrs. Roosevelt tried to be helpful. She presented the matter to Undersecretary of State Sumner Welles, her husband’s friend, and asked him to approach the Soviet ambassador. Welles responded on 31 March that he had brought the matter to the ambassador’s attention but could not intervene for non-American citizens, “since the Soviet Government consistently refuses to entertain representations from this Government on their behalf.” However, the Critical point is, that Sumner Welles confirms that the Soviet ambassador said they’ll review the matter in a sympathetic manner.

What seemed to have turned out was, that it was partially helpful.

As it turned out, Dubin had been held in Riga’s Central Prison until the end of June, 1941, when Nazi troops began making their approach to the city. He and his fellow political prisoners were then evacuated into the depths of the country. In Dec. 1941 he was told he was free to go, but that his papers had all been lost in transit. What seems to have happened was, that the pressure from around the world form those that had appealed to the Soviets with the request that Dubin be freed, and at the time the Soviet Union wished to appear decent in world opinion—their allies in the anti-fascist coalition—and they therefore freed Dubin and offered him to settle in Kuybyshev. However, he was not completely released, and he remained under the ceaseless watch of Soviet authorities, who figured they might need to arrest him again and wanted him near at hand.

This sheds light to only one of acts of involvements of the Frierdiker Rebbe in regards to attempting to rescue Dubin.

He would years later be arrested a second time. Again, the Frierdiker Rebbe tried again to help him, but this time, it seems to have been unsuccessful.

On Jan. 12, 1952, Dubin was sent to the Tula Psychiatric Hospital for “compulsory treatment in conjunction with isolation (Psychiatric treatment for those who did not need it was a common form of punishment and indoctrination in the Soviet Union), where he later died. Reb Mordechai Dubin passed away in 1957, and the Jews of Tula buried him. Thirty years later his remains were reinterred in the Jewish cemetery in Malakhovka, a suburb of Moscow, and a gravestone erected.

His wife, son and daughter in law were killed by the Nazis.