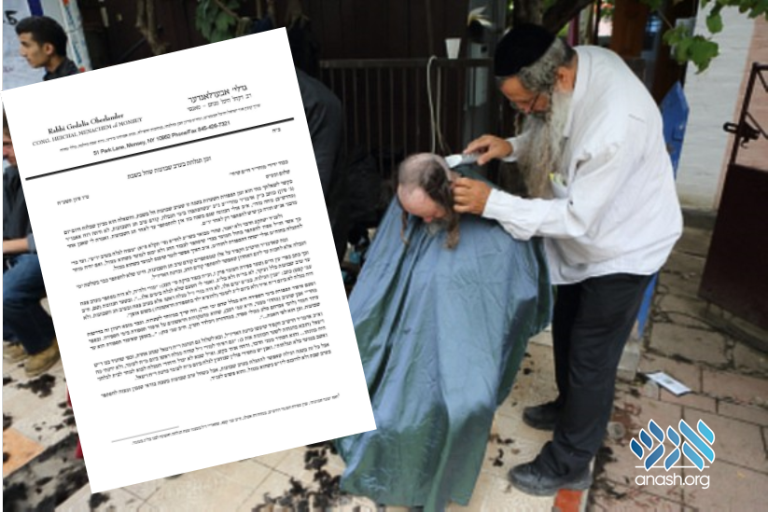 In Hayom Yom for 3 Sivan the Rebbe quotes the Frierdiker Rebbe: My father (the Rebbe Rashab.) was not pleased when people would cut their hair during the Three Days of Preparation, before Erev Shavuos.

But what do you do when Shavuos falls on Sunday? Should you take a haircut on Friday (the day before Erev Shavuos) or not take one at all?

Harav Gedalia Oberlander, rov of Heichel Menachem in Monsey and author of halacha seforim, wrote a tshuvah (halachic responsa) about this. His conclusion: take a haircut on Friday, Erev Shabbos, 4 Sivan.

Chazal say that it’s a mitzvah to get a haircut on Erev Yom Tov. So much so, that they forbade getting a haircut on chol hamoed of Pesach and Sukkos so that a person would not go into Yom Tov when he is unkempt (menuval). If a person could cut his hair on chol hamoed, he might put it off until then and thus be “menuval” on Yom Tov proper.

The reason the Rebbe Rashab was not pleased by haircuts prior to Erev Shavuos was because of the AriZal’s opinion that one should avoid cutting hair during sefirah since they are days of are days of judgement, which manifests itself mostly when it comes to hair. Since there is no need to take a haircut specifically on 3 or 4 Sivan, it is preferable to wait to take a haircut until the last day – in most years, Erev Shavuos.

The Rebbe Rashab was also negating the opinion of Reb Chaim Vital, the Arizal’s prime talmid, who for an unknown reason had the custom to take a haircut on day 48 of sefirah (as recorded in the writings of his son, Reb Shmuel Vital).

However, this is all relevant when speaking about a year where Erev Shavuos is on a weekday. But in a year like this one, when the last day to take a haircut would be Erev Shabbos, one should take a haircut then to enter Shavuos respectfully.

It is also worth noting what is related that in the town of Lubavitch they would take haircuts on a year like this on Erev Shabbos. It is also said in the name of Rav Zalman Shimon Dworkin, rov of Lubavitch in Crown Heights, that once in a year like this, while waiting to get a haircut at the barber’s, the barber got a phone call from mazkirus that the Rebbe asked that he come to 770 to give the Rebbe a haircut.