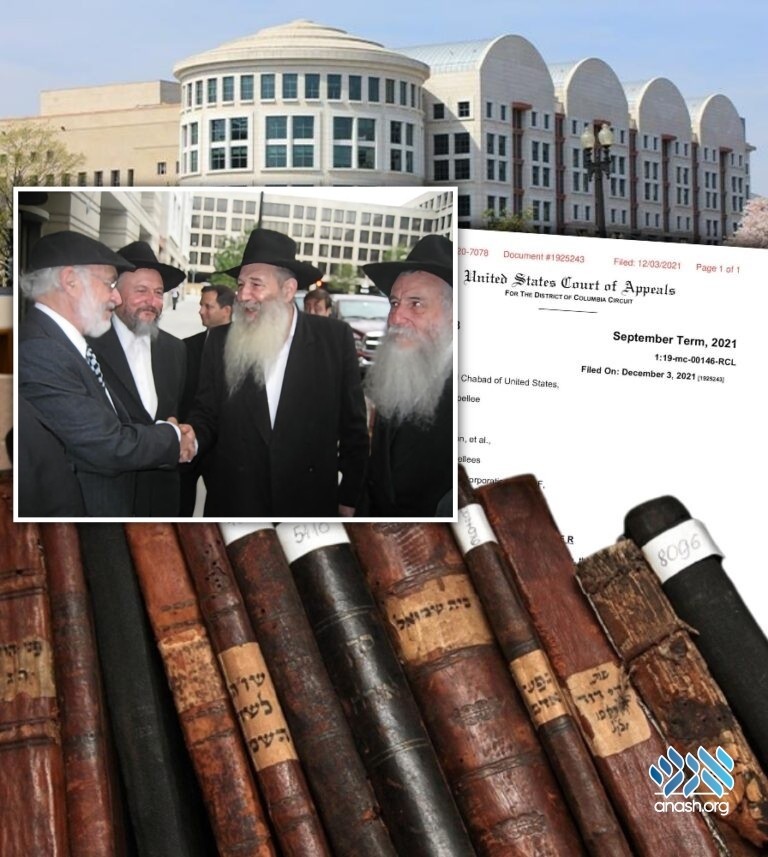 In 2008, Russia tried to justify its refusal to return the stolen books of the Rebbeim by claiming the victory of Hey Teves did not apply to the books in their possession. The judge had something to say about that.

Hey Teves celebrates the return of the seforim to the Rebbe’s library in 5747, after they were removed in an attempt to claim them as the property of one individual. Thirty-six years later, another battle is still ongoing, to return another stolen library to the hands of its rightful owners, the Rebbe and his chassidim.

Ever since the 1980s, attempts have been made to have Russia return the ‘Schneerson Collection,’ a library of thousands of books and manuscripts, collected by the Rebbe Rashab and the Frierdiker Rebbe. The books were transferred to Moscow by the Rebbe Rashab when he left Lubavitch, and after his passing, the Frierdiker Rebbe attempted to retrieve them, to no avail. After World War II, the Soviets nationalized the library, making it part of the Russian State Library.

In 5748, the Rebbe appointed a delegation to travel to Moscow and attempt to identify and return the seforim. The delegation included Rabbi Sholom Ber Levine, Rabbi Nissan Mindel, and Rabbi Shlomo Cunin. In a later delegation, the Rebbe added Rabbi Yosef Yitzchok Aharonov and Rabbi Yitzchok Kogan as well.

After attempts of working through diplomatic channels failed, Chabad turned to American courts to try and reach a successful conclusion. At first, the Russian Federation responded to the courts, and attempted to prove that the books legally belonged to them.

In one of their attempts, made on March 17, 2008, in the United States Court Of Appeals For The District Of Columbia Circuit, the lawyers for the Russian Federation made a shocking claim: They said that while US courts had determined that the Frierdiker Rebbe’s library had belonged to Agudas Chassidei Chabad, his earlier library which had been nationalized by Russia, was “personal property.”

“…When the Library was taken in the 1920’s, when it was expropriated and nationalized by the communist government of the then Soviet Union, it was the property of the Fifth or the Sixth Rebbes, it was the personal property of those Rebbes…” James H. Broderick, Jr., Esq. told the court on behalf of the Russian Federation.

The judge immediately interrupted him, invoking the court case of Hey Teves.

“I don’t really understand that claim at all. You appear to rely heavily on the Gourary case…Chabad won completely against its adversaries there,” Judge Williams said.

In addition to the judge’s interjection, the claims were responded to by Chabad’s lawyer, who was none other than Attorney Nat Lewin, who had himself represented Agudas Chassidei Chabad in that famous case.

“…I did have the honor of representing Agudas Chasidei Chabad both in the trial court and the Court of Appeals in the Gourary case, and let me say in that regard, Judge Williams, that what you said to counsel is absolutely true. We won the Gourary case totally,” he told the court.

As a result of the successful arguments of Attorney Lewin, the judge ruled that Chabad can go ahead with the case, and they were eventually successful, and in 2010, a US court ruled in favor of Agudas Chasidei Chabad and ordered Russia to hand over the treasured books. They also ruled that Russia would have to pay a $50,000-a-day civil contempt sanction until the books were returned.

As a result of the proceedings, Russia withdrew from the trial, claiming that US courts have no jurisdiction over the case. As a response, Chabad sued to identify and seize Russian assets in the USA to pay the sanctions, focusing on Tenex-USA Inc. (“Tenam”), a Maryland-based corporation that is owned by Russia’s state nuclear agency, Rosatom.

More recently, they brought the battle to Israel, with Agudas Chassidei Chabad requesting that the Israeli government halt the transfer of the Alexander Nevsky Church in the Old City of Jerusalem to Russia, which the Russians claim as their own. Efforts continue to this day, with Chabad seeing significant victories in their battle to pressure the Russians.

“In 5752, the Rebbe tied the victory of Hey Teves to the redemption of the rest of the library in Russia. What is especially amazing about this case was how we saw the clear connection between the two, and how the previous victory brought us closer to the upcoming victory b’ezras Hashem,” one of the individuals involved in the efforts told Anash.org.

“We will continue our efforts until the Rebbe’s wish is fulfilled in its eternity: that all the seforim, kesovim v’chafetzim – holy books, manuscripts and artifacts, are returned to their rightful place – the Rebbe’s library in New York,” he said.

The full transcript of the 2008 court case:
Download here.