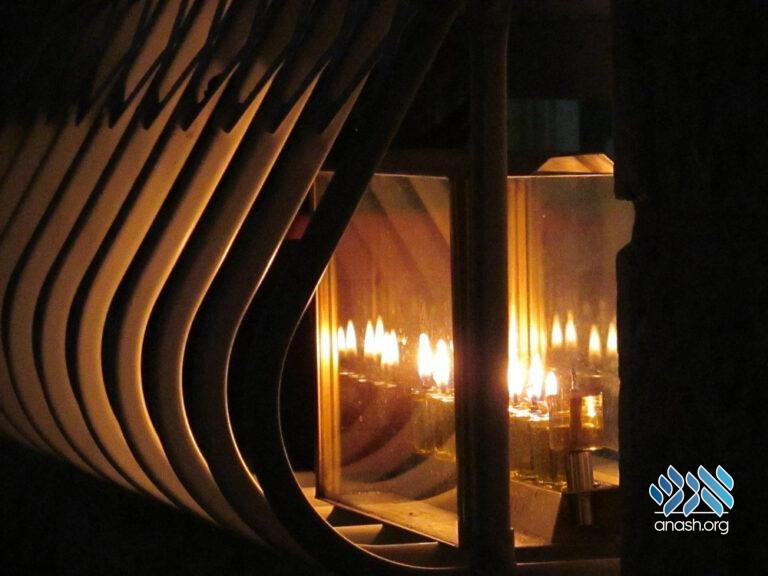 Motzei Shabbos Story: When Chanukah approached in the Obronic labor camp, a group of boys from the Chassidic Yeshiva of Gur were unsure if they should give up their clandestine nightly study to light the menorah.

The following account was shared by the late Rabbi Yoel Frankenthal, a Holocaust survivor, who went on to rebuild a full Jewish life in the Holy Land.

By the time the war ended, I had worked in about ten Nazi labor camps. The first one, in Obornik, about 30 km north of Poznań, is where we had a ten-day Chanukah.

We were a group of boys from the Chassidic Yeshiva of Gur, living in the Pabianice Ghetto. We managed to gather daily on the roof of a private house near the market square, hidden from sight, to study and pray. Even as our bellies were empty, our hearts were full of spiritual nourishment.

Many others were forced to labor for the Nazis, but we stayed in our little hideout and studied Torah and prayed.

The sadistic soldiers loved to abuse the Jews during their forced labor and came up with all kinds of creative ways to do so. For example, they derived perverse satisfaction from humiliating the workers who were cleaning the streets. To that end, any Jew who was assigned to street cleaning had to walk through the streets with a large broom over his shoulder. This gave me an idea. I got hold of a large, bulky broom, and early in the morning, when many others were out cleaning the streets, I would quickly make my way to the hideout with my broom over my shoulder. Now and then I’d pause to sweep, pretending to be engrossed in my cleaning task, until I made my way safely to my destination.

Things could only carry on for so long, and in the end our little hideout was raided and we were transported, as a group, to the Obronic labor camp. In the camp we were forced to labor from morning to night; there was no room for shenanigans.

Only our bodies were enslaved, however. Our spirits remained free. Our dank barrack was without windows, and our only companions were insects and rodents. At nights we were not closely supervised by the guards and this worked to our benefit. Every night we were provided a small amount of oil, which we placed in an ink container and used to provide a single flame of light. Every evening, as soon as the flame was lit, we would make the best of our short time before darkness prevailed and held a nightly Talmud class.

There was a fellow Jew named Yankelowitz who smuggled in a small volume of the Talmudic tractate Shabbat. As soon as the wick was lit, Yankelowitz would begin his lecture.

How he was able to make out the tiny words with that weak light, I do not know. Maybe the letters jumped out at him, or perhaps he knew the tractate by heart. Either way, we would listen to every word he said. When the light sputtered out, leaving a puff of smoke in the velvety blackness, we’d discuss and review what we had learned.

Chanukah was approaching and naturally, our minds turned to the subject discussed in the second chapter of Tractate Shabbat: which oil and wicks one may, or may not, use to light Chanukah candles.

The problem was that we had no wicks or fuel to light, save our nightly ration of oil, which was tiny enough as it was.

Furthermore, we could not use the same flame for both a Chanukah lamp and to provide lighting, since one may not benefit from the light of the Chanukah flames. But giving up our daily Talmud class, which gave so much spiritual satisfaction and meaning to our lives, was not an option either.

We decided to begin saving a few drops of oil every night in the lead up to Chanukah so that we’d be able to have our class and light a candle each night of the festival. We stored the oil in the empty shoe polish jar we had, hoping we’d have enough.

Now another problem arose. When did Chanukah begin? We were not sure which day of the Jewish month it was to begin with, and our problem was compounded by the fact that the month of Cheshvan, which precedes Chanukah, can have either 29 or 30 days. We decided to play it safe and add an extra day on either end of the eight days we thought would be Chanukah.

The first night, based on our calculation, arrived. With great excitement, our hearts filled with pride as Yankelowitz lit the first candle.

We continued this practice for ten nights. In lieu of fulfilling the mitzvah properly, with rows of flickering flames for each of us, we enthusiastically learned the laws of the Chanukah candles n our precious volume of Tractate Shabbat.

Our small flames only burned for a few short minutes each night, but at least we fulfilled the mitzvah to publicize the miracle of Chanukah, feeling deep in our hearts that miracles could still happen to us and that all was not lost.