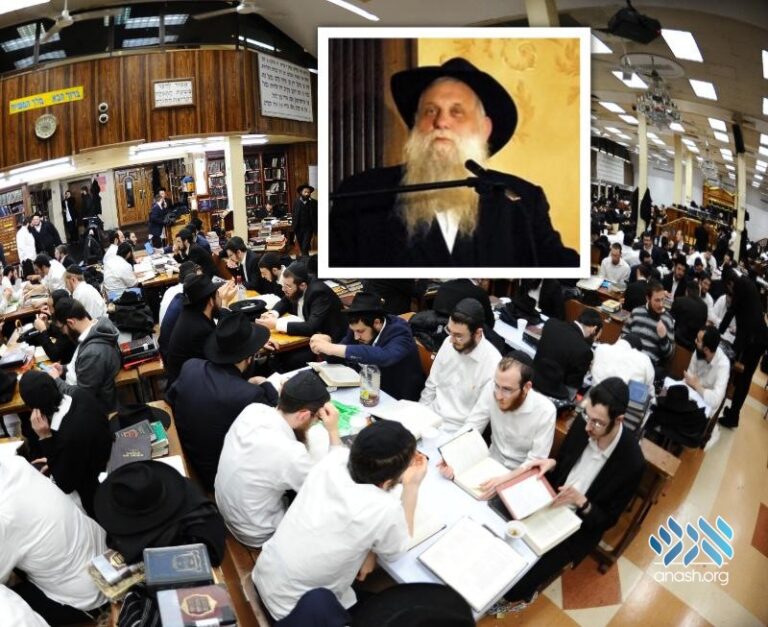 Rabbi Shimon Raichik, rov of Anash in Los Angeles, remembers the Rebbe’s campaign 50 years ago to conquer the world through Torah study and the impact that it had.

Fifty years ago, the Rebbe started a campaign to conquer the world through the study of Torah.

On Tu- B’Shevat 5731/1971, upon returning from the Ohel, the Rebbe held a farbrengen. In those times such a farbrengen was not common. The Rebbe said a ma’amar of Chassidus and then he launched a campaign that everyone should add in learning Torah: Not only that the students in Yeshivah were to add in quantity and quality, but that also the business people were to add in their time of learning and the quality of this learning.

The Rebbe used the expression, “To steal the time:” even in the time when according to Halacha a person is exempt from learning since he is involved in business, the Rebbe said we should even take time from that. The farbrengen lasted an hour and a half.

I was then learning in the Lubavitch Yeshivah in Montreal, and we heard the farbrengen through a hookup. No one knew why the Rebbe, upon coming back from the Ohel, launched such a campaign.

Shabbos HaGadol of that year it became clear. I was there at that farbrengen.

At the farbrengen the Rebbe told two personal incidents. First, he told a personal story. Later on, he explained why he had seemingly suddenly started this campaign of learning.

During the Shabbos farbrengen it was a custom of the Rebbe to take a Rashi from that week’s Torah portion and explain it. The Rebbe started this custom in the winter of 5725 (1964), after the passing of his mother Rebbetzin Chana. That week the Rebbe said he saw an explanation of this Rashi in Ohr HaMeir, which was written by R’ Meri Schapiro, the founder of the Yeshivah Chachmei Lublin. The Rebbe continued, “Everything is divine providence. My wedding was in Warsaw and the Lubliner Rav, Rabbi Schapiro attended the wedding and the Sheva Brochos. He gave me a present for the wedding, the Sefer Ohr HaMeir. I looked through the sefer then and saw the explanation for the Rashi we are discussing here. My father in law, the Frierdiker Rebbe, wanted me to speak with R’ Schapiro in learning but I didn’t, as is my custom. My father in law was very respectful towards the Rav. I looked into the Sefer then and I’m speaking from memory. No one should accuse me of being fluent in all the shailos and teshuvos of the acharonim.” (The wedding was in 1929 and the sichah was said in 1971)

The Rebbe spoke about why the campaign was launched, and from what I remember this is a synopsis of what was said. The Rebbe said, I was at the Ohel on Tu B’Shevat and I was urged to farbreng: there are not so many ma’amarim on Tu B’Shevat. We started the campaign of adding in the learning of Torah, and conquering the world through the study of Torah, now we see why it was. [That winter there was a big debate in the Congress of the United States, that they should nullify the status of the exemption of the draft for students. (This was during the Vietnam War.) This would include also rabbinical students, bochurim of the Yeshivah.] The Rebbe was saying that the campaign in adding in Torah would combat the decree of the draft. This was the reason for the unexpected farbrengen, and we saw the successful outcome of this campaign. Then the Rebbe demanded that this year Pesach, since there was a full week of chol hamoed, everyone should add in learning by day and night.

That year Yud Alef Nisan started the seventieth year of the Rebbe. Coming back from the Ohel the Rebbe again made a sudden farbrengen between minchah and ma’ariv. This was the beginning of the custom of the Rebbe’s giving a farbrengen on his birthday.

The Rebbe said a ma’amar about the eleventh day of Nisan which is connected to the nasi of that day. It was a very long ma’amar and it was later edited by the Rebbe for Yud Alef Nisan 5749 (1989).

Later the Rebbe thanked all those who wished him good wishes for Yud Alef Nisan; since there was no time to answer each person individually, he was taking this opportunity to do it at the farbrengen. At that farbrengen, the Rebbe once again reiterated that on Pesach we should each add in learning Torah. The word Pesach is made up of two words “Pe Sach” – a mouth that speaks (Torah).

When I came back from Los Angeles, for the last days of Pesach, 770 was full of people learning.

At the farbrengen on Acharon Shel Pesach, (and also at the farbrengen the Shabbos after Pesach) the Rebbe explained the brachah that every person, even a child, makes before drinking a glass of water. He explained that in this brachah lies the depths of Chassidus and this is what we teach even a young child. The purpose of speaking about it, is that each person should know the meaning of the brachah we make and think about it when you recite it. We tell a small child before you taste anything you have to make a brachah.

Why do we have to make a brachah? We have to ask permission from Hashem to eat since the whole world belongs to Hashem, and if not, it’s as if we are stealing from Hashem. The word “Boruch” comes from the word “to draw down”: we tell a child that before he eats he must thank Hashem and draw G-dliness into the world.

“Atah” – “you”– can only be said to someone who is presently here, not someone who is above in the heavens or someone in another room, so we are telling the child that he must know that the Aibeshter is here with you.

“Hashem” – Yud Kei Vov Kei – represents that Hashem (past, present, and future) is everlasting, as opposed to the world which decays. The word Havaya means creator, we must know that the water which we are drinking was created by Hashem.

“Elokeinu” – Elokim means G-d who is powerful; Elokeinu means that He is our strength and our life. We tell the child “Before you drink you must remember that your strength and the strength of your parents is all from Hashem.”

“Melech Haolam” – “the King of the World” – not like those who say the Aibeshter created the world and left it, and that he is somewhere in the seventh heaven, but He is the King of the World, and we are His servants and we accept His yoke as a King. This is expressed in every brachah a person says before he drinks or eats anything, even a child expresses it.

When it comes to the brachah on the Sun, which is said once in 28 years, everyone gets up early and prepares themselves for it, says Tehillim for it, etc. All this to make a brachah on the sun, but for a simple brachah people don’t realize what depth lies in the brachah we are saying, even before we drink a simple glass of water.

That year there was a change: till then the Rebbe ate the Yom Tov meals upstairs in the Frierdiker Rebbe’s apartment and the seder was conducted there with a minyan of elder chassidim, and after the second seder the Rebbe used to come down to the shul with the haggadah and spent hours explaining different passages of the haggadah. That year Rebbetzin Nechama Dina had passed away, so the Rebbe conducted the seder at home.

On Shabbos Parshas Shemini, the Rebbe opened up his siddur to the haggadah and started to explain different passages, (to make up for not doing it the second night).

One of the highlights that I remember from that farbrengen was how the Rebbe explained the Rashi, “this is the animal you are allowed to eat.” Rashi explains that Moshe Rabeinu had living examples of all creatures while in the desert. When he told the Jews the laws of kashrus and which animals we are allowed to eat, Moshe held up the animal he was referring to, even the birds and fish.

The Rebbe went on to explain that Moshe Rabeinu had to explain to the Yidden which animals they were allowed to eat. Therefore, he had to show them which animal was which. Yidden were then in the desert, and normally there were only snakes and scorpions present, and now Moshe Rabeinu had to teach a Parshah in the Torah about animals, so all the animals of the entire world came, yet no one comments about this miracle. Why don’t people comment on it? This is even a greater miracle than the flood where Noach did not have to take in any fish, and here Moshe had to bring even the fish from all over the world to the desert.

The answer is that even a child understands that if Hashem wants Moshe to teach the Yidden what they can and cannot eat, He must provide Moshe with visuals so that the Jews can clearly understand the laws. Concerning the greatness of learning Torah, all miracles connected with it are really secondary to it, since there is nothing greater than learning Torah.

The Rebbe connected this with the original sicha of Tu B’Shevat concerning how we must conquer the world through the study of Torah.

There is nothing in the world that can or should stop us from learning Torah.