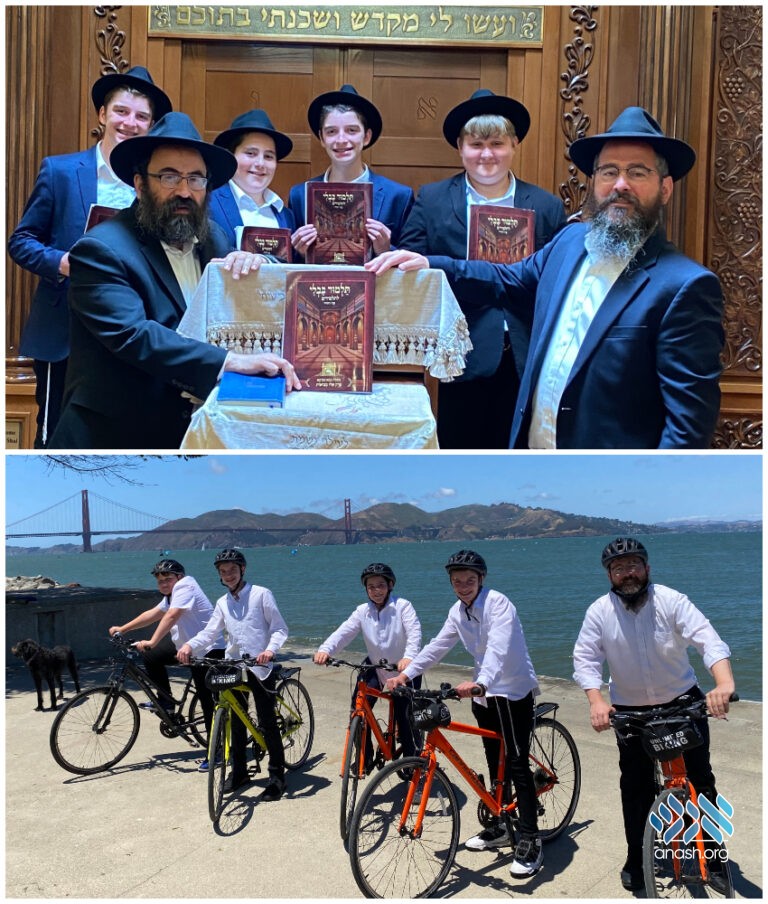 Rabbi Gedalia Potash, Shliach in Noe Valley, California was on a trip with a group of students from Bais Menachem Yeshiva in S. Francisco when suddenly one student asked him for the keys to his car. The reason surprised and delighted him.

The school year at Bais Menachem Yeshiva Day school was coming to a close. With a mixture of nervousness and excitement, the 7th and 8th-grade students were preparing for their test on the entire Perek of Ailu Metzius (Gemara and Rashi). Finally, the day arrived.

Early Tuesday morning the students piled into the car for a 50-mile drive. This would enable them to meet up with Rabbi Mendy Cohen of Chabad of Sacramento who drove 40 miles from the other direction. The meeting point in the middle was Chabad Of Vacaville where the local Shliach, Rabbi Chaim Zaklos, graciously hosted the test at his beautiful Chabad Center.

The boys were well prepared and Rabbi Cohen was impressed. “The boys were incredible!”said Rabbi Dayan Mendy Cohen “It was very heartwarming to see budding Talmidai Chachomim of such a caliber who have grown up in SF!” “ I want to bless them they continue to use their talents and continue to grow” “they are amazing young boys”

After the test, the boys were driven back to SF for a beautiful bike ride along the stunning S. Francisco Bay and over the Golden Gate Bridge. The continued to Limonnana, a new Kosher restaurant in downtown SF where they enjoyed a delicious lunch in the parklet in front of the restaurant. As we got ready to say Birchas Hamozon, one of the boys excitedly announced “we have a mezuman” “who wants to lead”? The next thing I heard was another student say “Can I have the keys to the car?”

Not sure why he would want my keys, he obviously noticed the surprised expression on my face. He immediately explained that he wanted to get his hat and jacket from the car so he could bench properly. Indeed, within a few short moments, all the boys had gotten their hats and jackets and were saying birchas hamazon proudly and joyously.

As I was watching what was going on in front of my eyes, I started to ponder the significance of this moment. Here we are in downtown SF and a bunch of born and bred San Franciscan early teens are sitting with their hats and jackets benching so carefully and beautifully. After spending all morning being tested on an entire Perek Of Gemara! It is no coincidence that it was 28 Sivan as well. The day the Rebbe came to America not just to escape the horrors of the Holocaust, but to build Yiddishkeit in America in an international way! Oy Rebbe! How did you know? Who would have thought that as we celebrate 80 years since your arrival in America, a place like SF wouldn’t just tolerate Yiddishkeit, but be a source of Yiddishkeit. A place where young boys joyously and successfully study gemara every day and pursue a life of growth in their chassidishkeit and connection to you. All in such a joyous and thoughtful manner.

Mendel! Yasha! Yosef! and Zalman! Chazak Vematz!! May you continue to grow and conquer the world with Torah and Yiddishkeit!

Under the dedicated leadership of Rabbi Gedalia Potash and Mrs. Chani Zarchi, Bais Menachem Yeshiva Day School continues to be a cornerstone of Yiddishkeit for hundreds of children and families in the SF Bay Area.

Through incredible hashgacha pratis, Bais Menachem was given the opportunity to purchase the current school building.

After several years of uncertainty, Bais Menachem finally managed to make financial arrangements to purchase the school building for $1,500,000. If you would like to support this endeavor, please do so by clicking the link below. What better day than before Gimmel Tammuz? What better time than now!