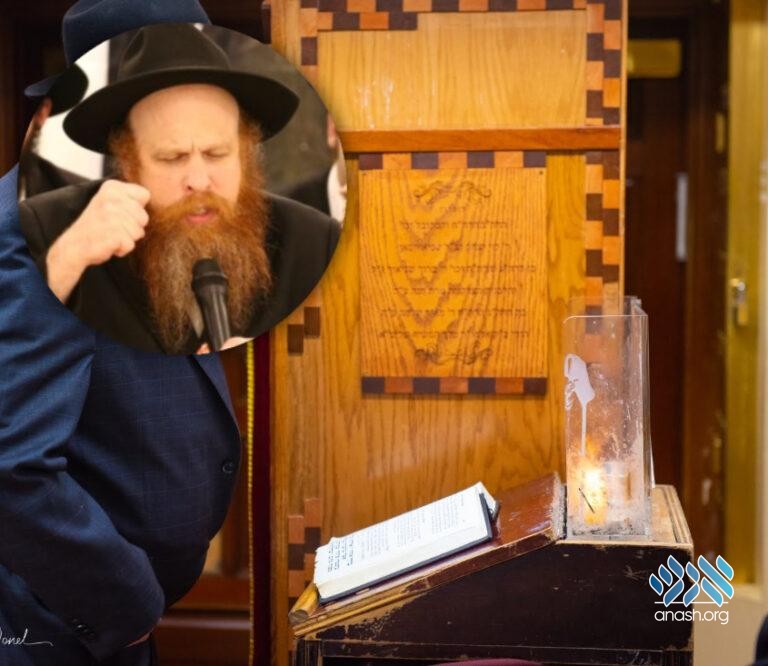 “It is much too common that I’ll be in a Lubavitcher minyan, in which the baal tefilah is flying. What is most disturbing is the notion that there seems to be that this is an inyan, that this is the chassidishe way to daven!”

Reb Peretz Chein, also known as ‘Reb Peretz Hagodol’, was a prominent chosid, who first came to the Alter Rebbe (in his youth), and was subsequently from the respected chassidim by a few Rebbeim (he was even, for a time, a chavrusa with the Rebbe Maharash), as well as a chassidisher rov.

Reb Peretz was known, specifically, for his avodas hatefilah, which was done with his entire being, and invariably lasted for many hours.

One Shabbos morning, the Tzemach Tzedek, his Rebbe, called him over. “Peretz”, he instructed him, “I am requested of you today to daven a bit quicker, because I would like you to be present by the farbrengen (after davening)”.

Undoubtedly, Reb Peretz tried to hasten his davening. But he wasn’t ready for kidush until just before the shkia!

The other chassidim were scandalized. “Peretz”, they admonished him, “How could you disobey a clear directive from the Rebbe?!” He replied: “If the Rebbe had told me not to daven, I would have had no problem complying. But the Rebbe told me to daven quickly, and that I found myself unable to do.”

In a beautiful sicha, the Rebbe addresses the Rashi on the words ויצעקו בני ישראל אל ה’, on which Rashi writes תפשו אומנות אבותם, – that the Yidden at that time were continuing the occupation of their forefathers. The Rebbe – after posing many very tough questions on the Rashi – explains that the Yidden were not worried, because they had complete faith in Hashem that he would redeem them (especially after the tremendous miracles that they had already witnessed).

Rather, their davening at that time was as a continuation the legacy of their forefathers, the avos, who davened as a form of occupation. This is what a Yid does, he turns to the Eibishter and connects to the Eibishter through davening. Not out of fear or worry or concern or need. But because this is what defines him, it is who – and what – he is. This is why all of the pesukim that Rashi brings regarding the avos is when they were davening not for any particular reason (in contrast to earlier examples, which Rashi did not bring, in which their tefilos were for a specific purpose or need), but because that was their occupation.

These days, it often seems that many chassidim are chagrined by the response of Reb Peretz Chein, in the above-mentioned story. They seem to feel that his behavior was inappropriate, and that if he didn’t listen to the Tzemach Tzedek (or to the Rebbe Maharash), then at the very least we should make up for it by following those instructions instead of him…

But I think this sicha helps us understand his conduct better. For a Yid, davening is not something he does to fulfill an obligation (or as a burden, ch”v, as we learn in the Mishna אל תעש תפלתך קבע), in which case when he is instructed to speed it up, he will rejoice over his exemption. Rather, it is his occupation. It is what he does because that is who he is and what he is all about. It is unavoidable for him. Everything else in life is out of necessity, to enable him to get back to his davening.

And, if this is what is said (and what Rashi teaches, to a ben chomesh lemikra!) about every single Yid, how much more is this true about a chosid, for whom much extra emphasis is placed on the importance of davening. And, especially, for a Chabad chosid [after, all, we all know the story of how the Alter Rebbe had a dilemma about whether to travel to Vilna to learn (Torah) from the Vilna Gaon, or to Mezritch to learn (davening) from the Magid, and the Alter Rebbe decided to travel to Mezritch to learn how to daven. Imagine how we would look if davening had not been that important to the Alter Rebbe…].

For all of us, we need to view davening as a crucial part of our existence. It’s what we do, it’s our occupation, and we can’t manage without it. It’s not something that we are looking to get over with, to be done with. [The story is told of a Jew who, lo aleinu, deserted the way of Yiddishkeit and adapted an irreligious lifestyle. Once, he met a friend who asked him, ‘After all of this, what did you gain by abandoning Torah umitzvos?’ He explained: ‘These days, I wake up every morning, un ich bin shoin a opgedaventer’]. Rather we treasure every moment that we are able to spend connecting with the Eibishter through davening.

I’m not talking about avodas hatefilah for many hours every day (or whenever possible). That may be the ultimate goal. but I’m talking about basic davening, saying all the words (for one thing), saying each word clearly, and thinking about the basic meaning (which is so much easier these days, with the numerous new siddurim that came out in recent years). I’m referring to approaching davening as something that we appreciate, that is what we are all about, about obeying the basic Mishna אל תעש תפלתך קבע אלא רחמים ותחנונים לפני המקום!

Contrary to what some people seem to think, – this is something that chassidim do, and that is extremely important to us.

In a Yeshiva in Eretz Yisroel, there was once a disagreement amongst the members of the hanhala. They knew that avodas hatefilah was something that the Rebbe had already made clear is demanded from our generation just as it was demanded from previous generations. But they still argued. Some said that since the Rebbe puts such emphasis on kabolas ol, and the most important thing these days for bochurim is strict adherence to shmiras hasedorim of the yeshiva, it is therefore not fitting for a bochur today to daven ba’arichus, if that will affect his ability to come on time to seder. Others disagreed.

It was decided that the Rebbe would resolve their conflict, and one of the members of the hanhala, who was travelling to NY, would present the views to the Rebbe. During a yechidus, the member of the hanhala presented the sides of the argument, and received the following response:

And the Rebbe concluded: “But Tomchei Temimim without avodas hatefilah, that cannot be!”

Perhaps I will be transgressing the commandment ofמצוה שלא לומר דבר שאינו נשמע  now, but I need to say this: I daven in many different places (not now, in Covid, ch”v…. but over the years…). It is much too common that I’ll be in a Lubavitcher minyan, in which the baal tefilah is a Lubavitcher bochur (or yungerman…), and he’ll be flying. Way beyond the speed limit!

What is most disturbing is the notion that there seems to be that this is an inyan, that this is the chassidishe way to daven! It is (usually) not that he is in any real rush. After davening I will see him sitting around leisurely, solving the worlds’ problems… But during davening, he needs to rush.

Rushing through davening like that is not davening. We’re not discussing the levels of avodas hatefilah or arichus hatefilah (which have to also, eventually, be achieved, at least at times). We are discussing basic davening (and, for sure, basic chassidishe davening).

Firstly, in some cases the baal tefilah (and many of the people in the minyan…) is simply not saying all of the words at such speeds. It’s easy to see this: when in the parts of the davening in which you have to say every word out loud (such as chazoras hashatz etc.) you are not able to keep up with your own speed in the other parts of the davening, then you know that you are simply not saying the words in the rest of davening.

And even those accomplished speed readers who may be saying the words, are in most places not thinking about (even) the basic pirush hamilos, or even about the basic (mandatory) idea that we’re standing before the Eibishter. Most of us are not Rogatchovers; to learn a Gemara, or a ktzos, or a maamar takes us time. It’s not possible – for most of us (at least I can definitely speak for myself) – to have any meaningful concentration or focus at such speeds.

And if you are able to think about your davening, still that is something we can always improve in. This our daily – thrice daily – connection with Elokus, and – especially if we were privileged to learn Chassidus and be able to appreciate what this means – we need to treasure this and cherish it. If you give a little more attention to your davening, it doesn’t need to make a big-time difference. An extra 5 or 10 minutes would make a huge difference to your davening.

It’s time for us, all of us, to apply the brakes to our davening. Davening is our אומנות, our occupation, it’s what we’re about and what we’re into. And we each need to work harder to make sure that that shows more.

We are coming now from Yud Shvat, and every chosid is focused on how to assure the continuity of the inspiration of the recent weeks, and of how to extend our focus on hiskashrus and on giving the Rebbe nachas. There is much that can be done and that needs to be done, but a part of everything needs to be to put more effort into our davening. Whatever else we do, what keeps everything together, what makes every part of our Yiddishkeit and chassidishkeit be more real and more alive for us, is our avodas hatefilah. Unquestionably, this is something that will give increased nachas to the Rebbe.

And this applies to chassidim and ovdim as well. Sometimes you see people who daven ba’avoda and ba’arichus on Shabbos or in special times and special places (or at least they daven way after the minyan…). But on the rest of the days they compete with the speediest daveners. We need to ensure that every davening meets the basic requirements, pronouncing every word properly and thinking about what we’re saying.

This is something that all hanholos need to also put more emphasis on (if I may humbly suggest so). It needs to be ingrained in our youth and in our bochurim that a chosid, and especially a Lubavitcher chosid and bochur has a higher bar for davening, and it needs to be an important part of our preoccupation.

We need to reverse the trend! Everyone should know and see (beginning with ourselves) that a Lubavitcher minyan and a Lubavitcher baal tefila is slower and more involved and with more fervor (as we learned in today’s Hayom Yom – with a burning fire) than anywhere else. We are not the ones speeding ch”v, we are the slowest. [You are afraid people in your minyan will start pinching you if you’re too slow? The chassidim in Russia endured much worse than some pinches in order to carry out the rotzon ho’elyon!]

Through our renewed and increased focus on our davening we will improve every aspect of our Yiddishkeit and chassidishkeit and strengthen our connection with Elokus. And this should hasten the ultimate connection between the world and Elokus, with Moshiach now!