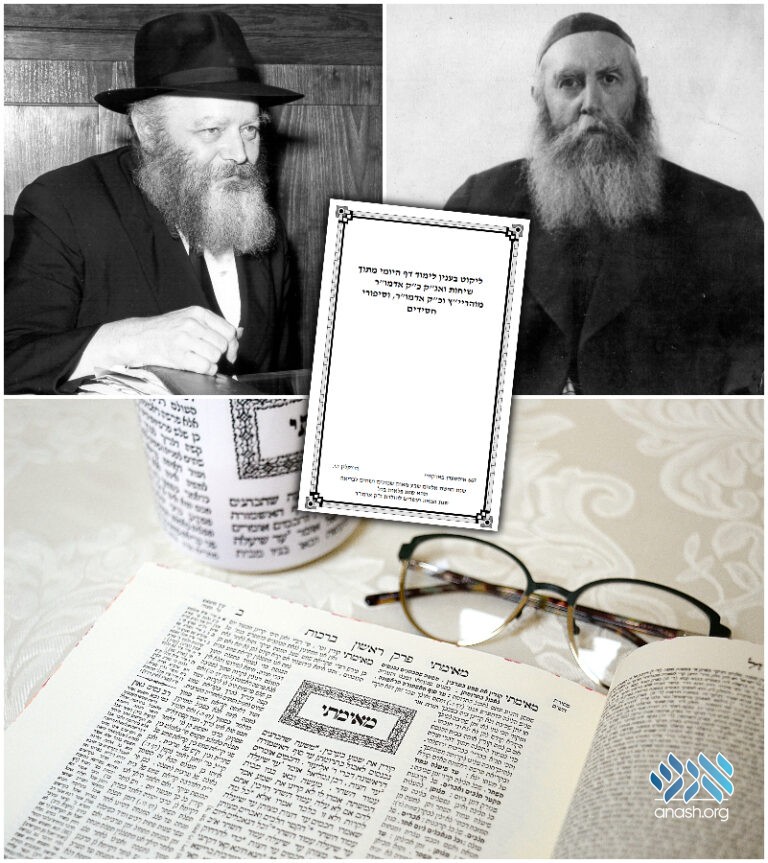 From the Anash.org Inbox: For years, I knew that Chabad chassidim don’t learn Daf Yomi at the Rebbeim instructions. But when I looked into it, I found out more.

It all began around the last Siyum Hashas.

Until then, I somehow knew that “Chabad chassidim don’t learn Daf Yomi.” Though the topic was certainly discussed many times before, as the Siyum Hashas approached, the conversation surrounding it resurfaced.

The Shabbos before the siyum, I was at a Kiddush in the basement of 770, and a heated discussion took place about the topic. As a bochur, I was listening and trying to make sense of it. I had heard about a maaneh from the Rebbe to Reb Peretz Mochkin about the Daf Yomi Shiur in Montreal, among other conflicting opinions, and I was eager to get to the bottom of it: Is it or isn’t it true?

At the farbrengen, there was this one yungerman excitedly shouting: “Hayitochen that someone could have any association with it when there’s befeirush a sicha from the Frierdiker Rebbe against it!”

When I heard that, I thought “Wow, if there is indeed a sicha against it, then there’s no more room for discussion.” I asked him which Sicha, and he told me it was Simchas Torah Tzadik Beis (5692). After looking for it, I soon realized that it was in “The Missing Sefer Hasichos” which only recently joined its friends on the shelf and had not yet been printed at the time.

So instead, I turned to Otzar Hachachma. I selected all the Chabad Seforim and searched “Daf Yomi.” To my surprise, besides that Sicha, there were quite a few results. I began collecting and sifting through them.

Another source often quoted against learning Daf Yomi was a Sicha from Parshas Shlach 5748. That portion of the sicha was not included in the printed version, but there is a transcript available that was missing pieces, and it was hard to even understand the phrases, let alone the overall point the Rebbe was making. After comparing all the Hanachos of that farbrengen – using the wonderful Mafteiach app with all the Hanachos under the same tab – I was finally able to understand what the Rebbe was saying.

Having gone through all the above-mentioned sources and more, I would like to lay out in short what I discovered:

1. Regarding the objection (mentioned by the Rebbe in the Sicha of 5748) against learning fixed amounts (“halomed Torah liprakim“):

The Rebbe, as well as previous Rebbeim, encouraged Chassidim to have a set study cycle of Gemara and other Nigleh Shiurim. Several months prior to the establishment of Daf Yomi, the Frierdiker Rebbe said that Chassidim should learn an Amud a day. In addition, in the Hatomim journal, the Frierdiker Rebbe writes that the Alter Rebbe had instituted in his time the study of a Daf a day.

Furthermore, the Rebbe was supportive of the Daf Yomi in Yerushalmi started by the Gerrer Rebbe – which is also fixed learning – yet the Rebbe never said that everyone should take it on. What the Rebbe was explaining in the sicha, as can be clearly understood by looking inside, was why Lubavitch didn’t embrace the takana and instate it as a widespread custom. This does not however mean that no one should learn it.

I should mention that if you find an issue with learning in this format, learning it one day off wouldn’t help.

2. Regarding the quote from the Rebbe that since the Frierdiker Rebbe didn’t instruct bochurim to follow it shows “tachlis hashelila bazeh” – “clear rejection of it”:

Although that line is written in one incomplete transcript, in all other hanachos it has it the other way around: that although the Frierdiker Rebbe didn’t reject it explicitly, he never instructed the bochurim to do it.

Moreover, a careful examination of the Sichos shows that the Rebbeim didn’t oppose Daf Yomi at all. The Rebbe mentioned it on numerous occasions and even encouraged it in multiple letters (see the booklet below). The Frierdiker Rebbe himself demanded of some to learn Daf Yomi. Though this may not be a proof in support, it definitely makes it hard to say that the Rebbeim opposed it.

3. The Sicha of the Rebbe must be understood in the context of the Farbrengen.

The Rebbe wasn’t saying that Daf Yomi is wrong, but why Daf Yomi isn’t included in what the Rebbe had explained a week earlier, that when we see others doing something good, we must join in, just as Aharon was saddened that he hadn’t brought the opening korbanos like the Nesiim. Following the earlier Sicha, the Rebbe said, he had been asked: Why then don’t we join Daf Yomi which is also a good thing that others are doing?

The Rebbe, therefore, explained that Aharon was only sad when he saw that all of the Nesiim brought the korbanos. But if only some people are doing something good, it’s not necessarily something that I must do. Similarly, said the Rebbe, Daf Yomi was not adopted by all of Klal Yisroel at the time, for various reasons, rather it was something that certain communities took upon themselves.

Meaning the Rebbe never said not to learn it, but rather why it’s not something Chabad accepted as an official takana for everyone to do.

4. In the Sicha of the Frierdiker Rebbe, he derides those who think that due to their study of Daf Yomi millions of malochim rise for them and are building for him a new Gan Eden, while in the past a simple farmer knew that before going to work, he must learn a Daf Gemara.

This clearly indicated that Daf Yomi itself isn’t the issue, but rather it’s the mindset of the person that is an issue, and it can result from other areas of learning and practice as well. In fact, the opposite is implied – that everyone should be learning a Daf of Gemara every day (albeit perhaps not specifically in the widespread cycle).

5. There is no mention anywhere about any instruction not to learn Daf Yomi due to its association with Agudas Yisroel, though seeing the Frierdiker Rebbe’s opposition to it I can understand if for that reason someone feels more comfortable learning a day off or a different cycle. It should be noted that the Rebbe mentioned that the founder of Daf Yomi, R. Meir Shapiro, was a Chossid, and that it is interesting that the misnagdim nonetheless embraced it.

My goal is not to encourage people to learn Daf Yomi specifically, and everyone can decide what works for them. Of course, we should learn Gemara since it’s Hashem’s Torah and not merely to “finish Shas”, and of course also it should not take away from learning Rambam and Chassidus daily. But if for learning Gemara one finds it helpful to follow a set cycle, it seems clear that there is no objection to following this program. What’s certain is that someone who doesn’t have a daily Kvius for Gemara shouldn’t be running around screaming at people who learn Daf Yomi.

My sentiments are not to be taken as objectives truth. Those with dissenting opinions and proofs should please share them by emailing [email protected]