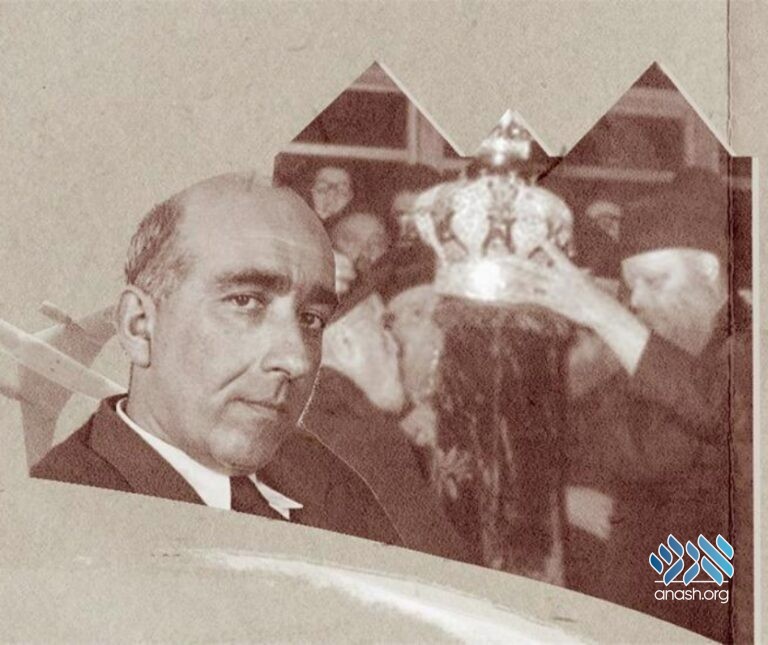 Motzei Shabbos Story: For years, Israeli Supreme Court Justice Chaim Cohn had fought against yiddishkeit in general, and against the Rebbe’s battle of ‘Who is a Jew’ in particular. But when he showed up by in 770 for hakafos, the Rebbe had only one question for him.

What do you do if you’re celebrating and rejoicing with friends, and the man who opposes you in your greatest life-battles turns up at the party?

This was Simchat Torah, 1975, at Chabad-Lubavitch Headquarters, 770 Eastern Parkway. Thousands of Lubavitchers were packed in tight, along with anyone else who wished to witness the most joyous hakafot in the world on the most joyous day of the year.

The gabbaim—esteemed official administrators—of the synagogue were frantically attempting to bring some order to the ceremony, while seeking out the contingent that would come every year from the Israeli consulate.

That’s when they saw Haim Cohn. And they didn’t know what to do. This was just the wrong man at the wrong party.

Who was Haim Cohn?

To Israelis, he is still known as one of the major architects of Israeli law, a great man of thought, and as a champion of human rights. Indeed, he was in New York for the United Nations general assembly, representing Israel in the Human Rights Commission. But Haim Cohn was also well known for his fierce opposition to all things religious, especially when they concerned the Israeli State.

Cohn came from a family of deeply religious Torah scholars in Lübeck, Germany. In 1929, at the age of eighteen, Cohn set out for Jerusalem, where he studied under Rabbi Abraham Isaac Kook, who he came to greatly admire, and at the Hebrew University. He returned to Europe to complete his degree in law at the University of Frankfurt, marrying there a young woman who was not interested in religion.

After returning to the Holy Land with the rise of the Third Reich in 1933, he gradually turned not just away from, but against Torah Judaism, actively opposing the rabbis, both as an authority of Israeli law and as a member of the T’hila Movement for Israeli Jewish secularism.

“The Elisha ben Avuya of our generation,” was the title given him by Rabbi Tzvi Yehuda Kook, son and protégé of his former mentor. Elisha ben Avuya was a brilliant sage of the Talmud, the teacher of Rabbi Meir, who had turned to heresy. Smoke rose from his grave, the Talmud tells, for well over a hundred years—and that was after the sages prayed for mercy on his soul. “Because he knew G‑d’s greatness and yet rebelled.”

Eventually, Cohn divorced his first wife and traveled to America for a secular marriage to a woman who had been previously married—an act that spurred the fury of rabbis in Israel. By Torah law, a descendant of Aaron, such as Haim Cohn, is forbidden to marry a divorcée.

But perhaps what concerned the gabbaim most was Haim Cohn’s role in the “Who Is a Jew” controversy.

This was a topic the Rebbe had addressed incessantly for the previous five years, warning in the strongest language imaginable that compromise on such a core issue posed an existential danger to the Jewish nation. Haim Cohn, on the other hand, as a Justice of the Supreme Court of Israel, stood his ground that Jewishness, as the state, is a social construct, and anyone who personally identifies as a Jew should be embraced by the state as a Jew.

The gabbaim who beheld this man standing before them knew well the controversy, indeed, the outright condemnation in many quarters that would arise if they gave him any part in the ceremony. Small wonder they stalled.

The Weight of Torah

But the Rebbe noted the hesitation of the gabbaim and protested.

“A Jew wants to take on the yoke of Torah,” he chided them, “and you won’t give it to him?”

The Rebbe personally purchased the reading of the first verse of the ceremony and said something to a gabbai, who then called out, “We hereby honor the illustrious Justice of the Supreme Court, Reb Haim haKohen, with the verse, “Atta Hareisa.”

Haim Cohn bellowed out his verse, loud and proud, and the Rebbe, the gabbaim, and the crowd of chassidim echoed him in full chorus.

The episode had not ended. When the gabbaim took out the Torah Scrolls, the first and the heaviest—the one known as “Moshiach’s Sefer Torah”—was heading straight towards Haim Cohn.

Again the gabbaim hesitated. This was a very heavy scroll after all, and Haim Cohn was no young man. It would make more sense to hand him one of the smaller, lighter scrolls.

The Rebbe looked Cohn straight in the eye. He asked, “Are you ready to accept upon yourself the weight of the yoke of Torah?”

If you never experienced that look, it’s difficult to relate. Two sharp blue eyes pierce through your flesh down to your bone and deep into your soul. There is nowhere to hide and nothing of you that remains hidden before those eyes.

Haim Cohn answered in the affirmative. The gabbaim relented.

When the singing and dancing began, Haim Cohn was still clutching his Torah, singing and dancing along with the consulate members and chassidim for a full three-quarters of an hour. Even as the Rebbe sang and clapped and encouraged the crowd with explosive joy, his eyes never left Haim Cohn.

That night, Cohn returned to his hotel. He returned to Israel, to his post, and to his opinions. Ten years later, he was still writing about “Who Is a Jew,” without any deflection from his original stance.

If you never met the Rebbe, if you didn’t know his ways, you might misinterpret this story.

You might say, “The Rebbe was very smart. He knew how to deal with his detractors. He knew that rather than arguing with a Jew, better to befriend him. That way, you have a far better chance of enlisting them to your cause—or at least, mitigating their gunfire. Too bad it didn’t work in this case.”

But that is not the Rebbe. And the proof: In this case, the risk was too big to fake.

And even if he didn’t say no, what if he didn’t mean what he said? The Rebbe was certainly a stickler when it came to halachah. How could he permit handing a Torah Scroll to a man known for his fight against things sacred to the Jewish people—and asking him to lead an entire congregation in prayer (as indeed the Rebbe’s critics demanded to know upon hearing the story)?

But the Rebbe didn’t see before him an opportunity to win at a game. Or to gain a new adherent. Or even to gain some ground.

The Rebbe saw before him a Jew. And he believed in that Jew.

He believed that, regardless of everything this Jew had said and done for the past thirty years, a Torah Scroll remained for him the most precious, sacred object in the world. And that his innermost, deepest desire was to carry and embrace that Torah.

Did it help? Let’s say it didn’t. But, as the first rebbe of Chabad wrote in his classic work called the Tanya, when you see a Jew who is not doing the right thing, pull that Jew in with thick cords of love. Perhaps he will change his ways, perhaps not. Either way, you’ve fulfilled the mitzvah of loving another Jew.

But I believe it did help.

You see, years later, a certain Chabadnik befriended a certain Israeli who lived in Manhattan. Before Simchat Torah, he invited him to come to 770 and celebrate with the Rebbe.

But the man refused, adamantly. “I have a friend,” he explained, “who went there one year. And it changed his mind about many things. I am not interested in changing my mind about anything. I’m not coming.”

The friend, as you may have guessed, was Haim Cohn.

Outwardly, perhaps, at least in the immediate, nothing changed. But then, Maimonides writes in his Laws of Repentance that if a Jew has regret in the recesses of his heart, even if he remains recalcitrant, his repentance is accepted and his share in the World To Come reinstated.

And eventually, as Maimonides writes in a famous letter to the Jews of Yemen, this Jew will come to a complete repentance. As the verse goes, “Return, wayward children, and I will heal your returning.”