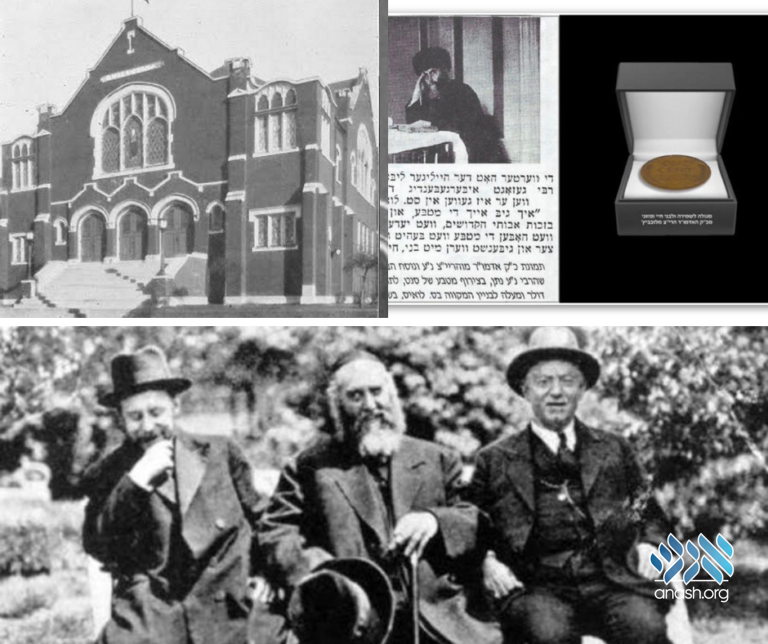 If you could put a value on a blessing, what might it be worth?

For a unique, nearly 90-year-old blessing, the going rate is $6,750. That’s the amount a bidder paid last week in Tel Aviv for a well-traveled Lincoln penny, the subject of frenzied bidding at the Israeli Genazym Auction House rare artifacts auction July 16.

The penny in question gained relevance — and was bestowed as an instrument of blessing — in St. Louis one spring day in 1930 during a historic visit by Rabbi Yosef Yitzchak Schneersohn, the sixth Lubavitcher Rebbe and leader of Chabad.

The Rebbe arrived in the United States for the first time after being released in 1927 from imprisonment and a death sentence for supporting Jewish religious life in the Soviet Union, said Rabbi Yosef Landa, regional director of Chabad of Greater St. Louis.

“The Rebbe was revered and celebrated as a great hero of the Jewish people,” said Landa, who was named after Schneersohn. “By all news accounts, several thousand people came out to greet him in St. Louis. He was also the last major leader of Soviet Jewry.

“These were very dark times for Soviet Jews. People were being arrested and executed. It happened on a daily basis. Or they would be banished to Siberia. The Rebbe himself was arrested several times. He defied the Soviets. He declared ‘No power can tell us that we can’t practice our religion.’

“During those horrible times in the Soviet Union, a parent could be taken away for giving their child a bris, and the mohel could be shot. The Rebbe and his followers disregarded the risks. They had the spirit of self-sacrifice.”

Since Landa arrived in St. Louis in the early 1980s, he has assembled a great deal of  information and materials related to Schneersohn’s 1930 visit and is working on a book about the sixth Chabad Rebbe. His research has uncovered many details of Schneersohn’s visit.

It was part of a national tour of U.S. cities with a large Jewish presence. In St. Louis, the Jewish community enthusiastically welcomed the Rebbe. At his first address, held at the cavernous B’nai Amoona Synagogue at Academy and Vernon avenues in St. Louis, Schneersohn’s presence more than filled the 2,000 seats. In previous years, leaders from Israel including Zionist Chaim Weizmann and Rabbi Abraham Isaac Kook also visited St. Louis. They were important Jewish figures but drew only spotty audiences. The Rebbe wrote to his wife twice daily, and one letter remarked upon the standing-room-only crowd.

The Rebbe’s 1930 visit coincided with two other noteworthy events. The Great Depression was in full force, and the Jewish community was trying to raise funds for a new mikvah. That campaign wasn’t succeeding, so community leaders tapped into the Rebbe’s popularity with a creative fundraising idea. Anyone who contributed to the mikvah would receive a special penny, which would bear the Rebbe’s blessing. Schneersohn agreed and offered a meaningful, poignant blessing in Yiddish:

“I give you this coin in the hope that in the merit of my holy ancestors, whoever will receive this coin will be protected from pain, and will be blessed with offspring, life and prosperity.”

The penny thus became a segula, a physical manifestation of a blessing. Donors to the mikvah received the penny along with a card with the blessing printed on it. It’s important to remember, Landa said, that only G-d is the source of blessings. However, a physical object of a righteous person can be the instrument of that blessing. The Rebbe certainly fit that profile, so the pennies took on importance more because they were associated with a  historic visit by an important figure in Judaism. If the owner of the penny thought it would help deliver the blessings of health and prosperity, that was his or her business.

In rare instances, a Schneerson penny will pop up. It’s entirely possible that a member of the Jewish community in St. Louis may have one in a box on a shelf, gifted from a relative who saw the Rebbe that May day in 1930. The accompanying card helps verify authenticity, but the coin itself is in no other way remarkable.

Why then did one of the Rebbe’s penny’s sell last week for the equivalent price of a new Rolex? Because it’s the only known one that exists. The penny itself, a 1930d, carries little value, according to Casimir Koziatek, a coin grading specialist at Scotsman Coin & Jewelry in Creve Coeur.

“The current value of a 1930d penny is 7 cents,” Koziatek said. “I have a huge bag of pennies to sort, and I guarantee there are probably 40 1930ds in there. From a numismatic perspective, the 1930d isn’t worth much. Most coins that have a substantial resale value are rare, because few were minted or few remain in circulation. This is an unusual one because its value derives from an event and person, that being Rabbi Schneersohn and his visit.”

How the Genazym auction house acquired the Schneersohn penny is another tale. It came to them bearing unimpeachable authenticity, according to Chaim Stefansky, a Genazym partner.

“I got it from a rabbi who received it from Rabbi Abraham Halperin (a member of the clergy at B’nai Amoona from 1917 through 1962),” Stefansky said. “It comes with the validation of a Lubavitcher Rebbe, so I don’t think it can be any more credible than this. The provenance and authenticity are above reproach.”

If Schneersohn’s visit to St. Louis was a big deal, history is repeating itself with one of his more curious legacies: the Rebbe’s Penny. On the day before the auction, Stefansky said, Genazym was flooded with requests for bidding credentials.

“It’s extremely desirable,” he said then. “People are registering from all parts of the world, including Australia. It’s amazing. Now, these are people who can afford it, because we’re talking about a penny here. These are mostly individuals, but I heard there was one group who gathered together for a pool and their plan, if they are the winning bid, is to circulate the penny to each member of the group for one month a year.”