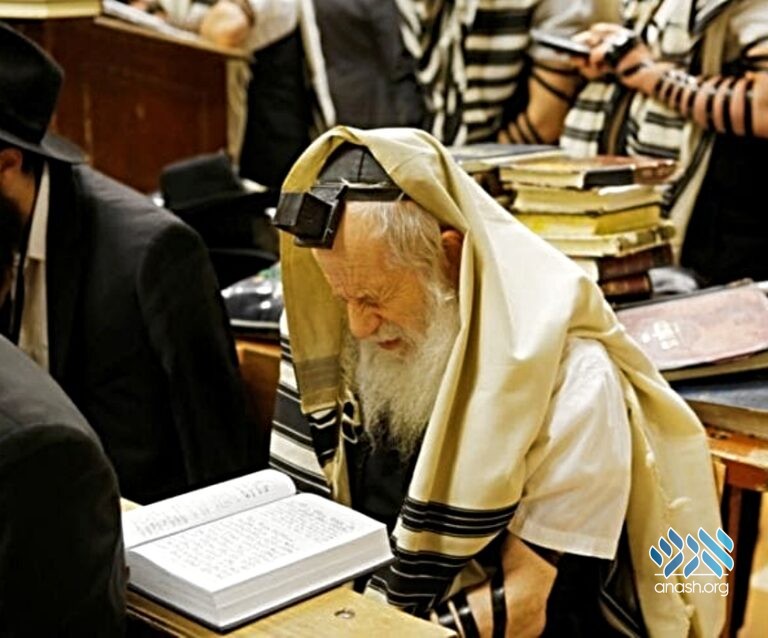 Mendel Gurary writes his memories of Reb Pinye Korf, and the lessons he took from attending his farbrengens, studying Chassidus with him, and even just by watching how he would act.

I would like to share some memories and anecdotes about Reb Pinye ע”ה from my years in Oholei Torah Zal.

The first thing that comes to mind is Reb Pinye’s farbrengens. Reb Pinye would farbreng at Oholei Torah Zal every Shabbos at 2:30 PM.

Reb Pinye would farbreng consistently every Shabbos whether it was a long summer Shabbos or a short winter Shabbos. Even if there was no Yeshiva that week, Reb Pinye would invite bachurim to his house to farbreng.

For Reb Pinye every word of The Rebbe was to be taken literally. Even if The Rebbe mentioned a הוראה only once, Reb Pinye would carry out the הוראה throughout his entire lifetime.

Normally a person would be tired after such a busy morning and long walks. However Reb Pinye was full of energy and would farbreng with much chayus at 2:30 PM as if he had just started the day.

It did not matter how many people came to the farbrengen, Reb Pinye would farbreng with the same chayus for a big crowd or for one or two bachurim.

This is pretty much the “סדר” at Reb Pinye’s farbrengens:

Reb Pinye would start off the farbrengen with a point of a sicha “פותחין בדבר מלכות” and say the הוראה. Reb Pinye would always bring out in every story and every ווארט how it relates to action,המעשה הוא העיקר and what lesson we can learn from it and apply in our עבודת ה.

He would share many stories of chassidim during the farbrengen, although many stories were repeated over and over again Reb Pinye would say them  with a new chayus each time. He was not trying to impress anyone or say a novelty, he was just being himself, a true chasid and sharing that with others.

Most of the time Reb Pinye would start niggunim by the farbrengen. The niggunim would usually be the same few, but you can tell that Reb Pinye was really living and experiencing the niggun.

Reb Pinye would normally speak in Yiddish at the farbrengen, however many times he would ask if everyone understood the language. If there was even one person who did not understand Yiddish, he would switch languages and repeat what he had said previously in English or Hebrew.

This shows his exceptional אהבת ישראל and sensitivity to others. Although he was not as comfortable with speaking those languages. He went out of his way to make sure the participants felt part of the farbrengen and understood what was being said.

I always looked forward to Reb Pinye’s farbrengens on Shabbos, it really added so much תוכן to my Shabbos. The farbrengen would inspire me when going on Tahalucha on Shabbos and until the next farbrengen.

Reb Pinye was always in a continuous farbrengen. We are waiting to continue the farbrengen with Reb Pinye with the coming of Moshiach now.

One of the things that sticks out in my mind is Reb Pinye’s Mivtzoim. On Chanukah, Oholei Torah would send out buses to different areas in NYC to do Mivtza Chanukah. Reb Pinye used to join the bachurim on Mivtzoim. Despite his age he would come on the bus, and go with a Bachur on Mivtzoim.

This really shows Reb Pinye’s dedication to The Rebbe’s Mivtzoim. It did not matter how cold it was outside or who he went with. The Rebbe says to go on Mivtzoim so he did! Whatever it takes to do the Rebbe’s instructions, Reb Pinye did it.

Sometimes Reb Pinye would invite bachurim to his house after Mivtzoim! to farbreng, to fulfill another הוראה of The Rebbe to farbreng during the night’s of Chanukah.

Reb Pinye’s davening made a big impression on me. He did not kratz nor did he rush. He said the words carefully and with a chassidishe chayus, always looking inside the siddur.

Many times he would be chazan in 770, I would always love to hear how he davens out loud and it was very geshmak to be part of his Minyan. He was never in a rush, when he davened it felt like that was the only thing on his mind, and he was fully present.

Reb Pinye was a real ‘דוגמא חי of what a chasidishe davening should look like. He davened in a way that can be emulated, it was seemingly average but with so much כוונה and chayus. You can hear the פירוש המילות from his davening. By farbrengens he would strongly encourage others to daven at least with פירוש המלות.

I would like to share an incident that happened while I was learning in Oholei Torah Zal.

Reb Pinye wrote a הערה in קובץ הערות וביאורים – אהלי תורה asking a bunch of questions on a maamar. He left the questions unanswered and asked people reading the הערה to respond if they had an answer.

I came across the הערה and tried answering the questions. In the next edition I wrote possible answers to Reb Pinye’s questions on the maamar.

Reb Pinye reviewed my answers but was not satisfied, so he wrote back in the next edition questions on my answers. This went on for a few weeks back and forth. Finally the מערכת of

הערות וביאורים – אהלי תורה said that they would not continue printing our הערות as it has stretched out for too many weeks.

I was sitting in Zal one day, and Reb Pinye comes over to me and said, the מערכת won’t print our הערות but we can still continue the discussion between ourselves. He gave me a piece of paper with his handwritten comments on my last הערה. He even left his phone number so I can call him if I had a question.

See picture of the page below.

This made a big impression on me, Reb Pinye really cared about learning and understanding what the maamar meant. Even after the מערכת stopped printing the הערות he still continued discussing the מאמר with a young bachur, many weeks after he had written the original questions.

One of the things I admire a lot about Reb Pinye was his geshmak in קבלת עול. Reb Pinye exemplified utmost קבלת עול and bitul, fulfilling every detail of הלכה and every הוראה of The Rebbe. At the same time doing everything with a chayus and פנימיות’דיקע שמחה. His עבודת ה was done in such a beautiful way that inspired others to want to be a better Yid and Chasid.

When I think of Reb Pinye I think of these 2 things אמת and פנימיות. Reb Pinye was for REAL, everyone who met him recognized that he is a true chasid. He was not into making shows or performances, he did not do things to please others. He was always being himself and sharing that with others. His external was always an expression of his internal Chasidishe essence.

Reb Pinye was also a פנימי he farbrenged many times about the importance of being fully involved in what you are doing. He used to repeat often the sicha of פנחס תשנ”א where The Rebbe speaks about the importance of פנימיות and quotes the saying of The Rebbe Rashab “א פנימי וואו ער איז איז ער אינגאנצן” – An internal person wherever he is, he is  there with his whole essence”.

Reb Pinye was a true example of this statement. When Reb Pinye was doing something whether davening, learning, farbrenging, speaking with someone etc. he was fully present and fully focused on what he was doing.

There is so much we can learn from Reb Pinye