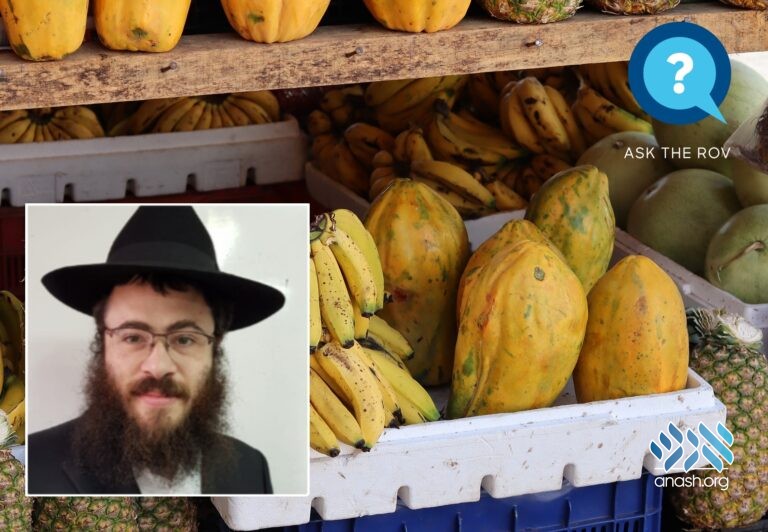 Ask the Rov: I was always taught that you make bori pri ha’aetz on fruits, but the halachic definition of fruits seems to be different than the classic one. How do I know which fruits fall into which category?

A tree is usually easy to identify, but sometimes its halachic status as a tree, to determine the bracha of its produce, is not as clear. Within the category of perennials – plants which produce fruit yearly without needing to be replanted – some lose only their leaves during the winter but their branches and trunk remain, while others lose their branches, and some even their trunk.

According to one view in rishonim, all that matters is for the root to remain from year to year. Others require the trunk to remain, while a third view maintains that if the branches don’t last from year to year, it’s a bush and not a “tree.”

Since the bracha of ha’adama can cover ha’etz but not the other way around, the Alter Rebbe holds that ha’adama should be made on the produce of all three categories, reserving ha’etz for only when the trunk and the branches remain from year to year. Still, if one recited ha’etz on a plant when only the roots remained, they are yotzei b’dieved.

A second criterion for a “tree” is that the fruit grows from branches that extend from the main trunk. If the leaves and fruit grow directly from the trunk, the bracha is ha’adama and ha’etz would not be effective even b’dieved. Additionally, many poskim hold that if a tree produces fruit in its first year of planting – unlike most fruit trees that take several years – it’s not considered a tree for brachos.

Banana plants mostly die each year and regrow from the root that remains in the ground. In addition, bananas grow directly from the trunk. Similarly, pineapple grows from the stalk and the original stalk doesn’t produce fruit again the next year. Papayas grow in the first year of planting, and more importantly, grow directly from the base. Their bracha is therefore ha’adama.

Some argue that the requirement for branches only applies to small bushes and not to a full-size tree like the banana or papaya plants, thus papayas would possibly be ha’etz and bananas would just depend on the first machlokes regarding trunks that regrow each year (and b’dieved ha’etz would be effective). Others dispute this distinction, and this seems to be the Alter Rebbe’s opinion. Accordingly, ha’etz wouldn’t work even b’dieved.

Strawberries plants mostly die in the winter and regrow the next year, thus they are ha’adama. Blueberries and blackberries, on the other hand, grow on branches that remain year-round and are therefore ha’etz.