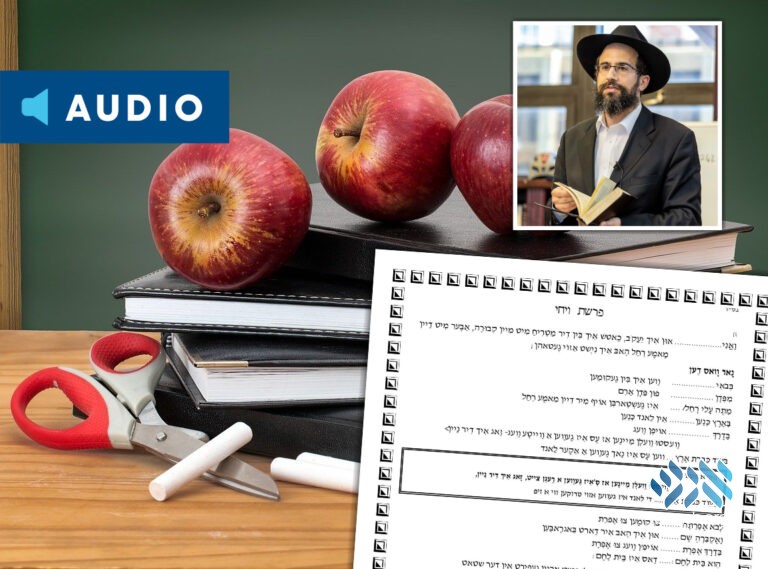 Rabbi Avrohom Bluming, director of Lubavitch teachers’ organization Igud Hamelamdim, shares the story of his second grade rebbi who taught him the “Va’ani” and its impact 25 years later.

Perhaps some don’t know what the ״ואני״ song is all about.

In many Yiddish-speaking schools, the pasuk “ואני בבואי מפדן” of this week’s Parshas Vayechi (as well as the pesukim of ברכות יעקב) is sung with a special heartfelt tune and memorized by heart by the children.

When I was in 2nd grade, my Rebbi taught us the ואני song, and it stuck with me ever since. At the time, I connected with it deeply, singing it over and over for my family members.

Going forward more than 25 years, I was teaching Parshas Vayechi, and wanted to give my students that same heartfelt experience which I received learning that Parsha.

I tried to track down my 2nd grade Rebbi (Rabbi Revitzki was his name). I called the principal, Rabbi Goldberger. He was already retired and had moved to Eretz Yisroel, but told me that Rabbi Revitzki had long ago left the Yeshiva.

In determination to find him, I took out a phone book and started calling Revitzkis (there were many in the book…) After about the third try (i.e. “Hello, I am looking for Rabbi Revitzki who was my 2nd grade Rebbi some 25 years ago…”), I BH chanced upon someone who said “he’s my uncle!”

From there, I got hold of him, and asked if he had the papers and audio recording from over 25 years ago “because I remember the impact and want to give it further”.

He said to me, “You are not the first one to call me. Over the years a number of my former talmidim called, telling me what an impact it left on them… In fact, someone else had once called me for the documents, however I never received them back.”

He then said, “I will make a new one for you!”— a new typed up document and a recording on a tape (whoever still remembers what that is…) He told me when it would be ready so that I could come pick it up from him, which I did.

Attached, is the text from the Va’ani song, and also an audio recording.

As we stand now in this week’s Parsha of Vayechi the above infuses us with a fiery lesson:

When a teacher is passionately on fire about something, it will last the student a life time! Nothing else will give that impact, and nothing can take it away.

As we stand now in the week of ויחי – חזק, let us reflect on “being alive– on fire!”